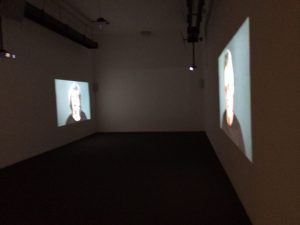 Terry and Jo Harvey Allen take turns telling stories from giant video projections from both sides of gallery room of which the central wall – the one you walk toward on entrance – is occasionally occupied by a man whose back is to us, his audience, as he plays a keyboard and croaks out folk songs.

The stories and the titles of the songs of this piece called Memwars are entrancing, and get swept together with a couple of Texas twangs that do not misrepresent the locales described. 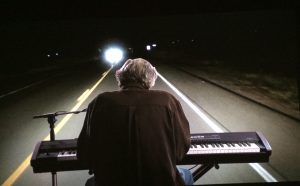 Most people will not take the time to listen to all the stories and songs – I stood in the space for a good 15 minutes and didn’t see a repetition – because they’ve come into a contemporary visual art museum and they expect the content to be one glance away. Also the sound was not great. The whir of the three projectors was just slightly less prevalent than the voices unless you were standing directly beneath the speakers. The lyrics of the songs were impossible to understand and the speakers back in the corner where if you could really hear, you couldn’t see the entire projected image.

In one story Jo Harvey Allen described a 120 mile trip from Lubbock toward Amarillo and a Sunday dinner with cousin where she road lying on the shelf beneath the rear window of an big, old Hudson, looking a the sky and land at the fringes of it.

In another, Terry Allen spoke about Jo’s cousin going to the war in Vietnam, I’m guessing, although walking in on a story it is impossible to be sure. The cousin had gotten drunk in Mexico and gotten tattoos of Roadrunners on both shins – in preparation for going to war. When his body was blown up in the fighting, the Roadrunners were how it was identified.

The stories are well told.

They are about another time, and the tellers do nothing to visually hide the fact that they’ve lived a while. This is a memoir of husband and wife who have been married for decades and met in high school – where they were buddies with Texas songwriters like Joe Ely and Butch Hancock. They’re from Buddy Holly country. 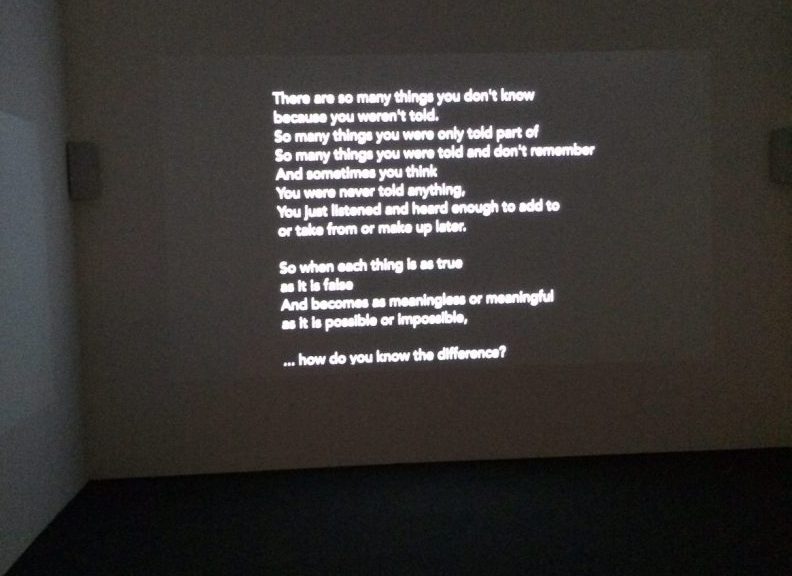 This work is far more autobiographical then the previous work Allen presented at Site Santa Fe. That one was biographical. Through letters, notes from various researchers, Allen made viewers wonder about a French writer who few of us had really given much thought. He created a mini-traveling museum for Antonin Artaud – giving plenty of insight into the life and snippets of the art.  This piece – Memwars – is a much tighter piece.

Since the fall, Site has been keeping their efforts at producing new exhibitions to a minimum.  They’re getting ready for a biennial this summer and preparing to build an addition – blowing out the south wall and doubling the gallery space.  Knowing that professional attention will be stretched thin,  the museum is running a series of shows by artists they have previously shown, and asking these artists to come up with something new.  So they call the current show:

Terry Allen
THEN: In 2010 Terry Allen participated in the group exhibition One on One with  drawings and video sculptures inspired by the life of Antonin Artaud.  His work was also featured in the 2013 traveling exhibition State of Mind: New California Art Circa 1970 curated by Karen Moss and Connie Lewellen.
NOW: Allen will present a new immersive narrative video and sound installation entitled Memwars. In this new work, video projections of a script being read move slowly along tracks on the wall to create a destabilizing and ever-changing experience of cinema and storytelling.

Other parts of this exhibition:

THEN: In 2007 Luis Camnitzer’s work was featured in the group exhibition The Disappeared/Los Desaparecidos. More recently, his work was included in the 2014 SITElines biennial exhibition Unsettled Landscapes.
NOW: Camnitzer presents two works, separated by forty years in the artist’s career, where disorientation plays a central roll in the viewer experience.  The Shift of the Center of the Earth (1975) and Cardinal Points (2015) each take up a single room with interventions in space that pose questions about location, orientation, and power.

Wangechi Mutu
THEN: In 2006 Wangechi Mutu’s work was featured in SITE Santa Fe’s Sixth International Biennial: Still Points of the Turning World, curated by Klaus Ottmann.
NOW: Mutu will collaborate with artist Edgar Arceneaux on a site-specific drawing installation.  The artists will be in residence at SITE in early March leading up to the exhibition opening as they create this collaborative work directly on the gallery walls.  In addition to this collaborative work, Mutu will present The End of Eating Everything, 2013 the artist’s first animated short that is a mesmerizing commentary on mass consumption in contemporary life.