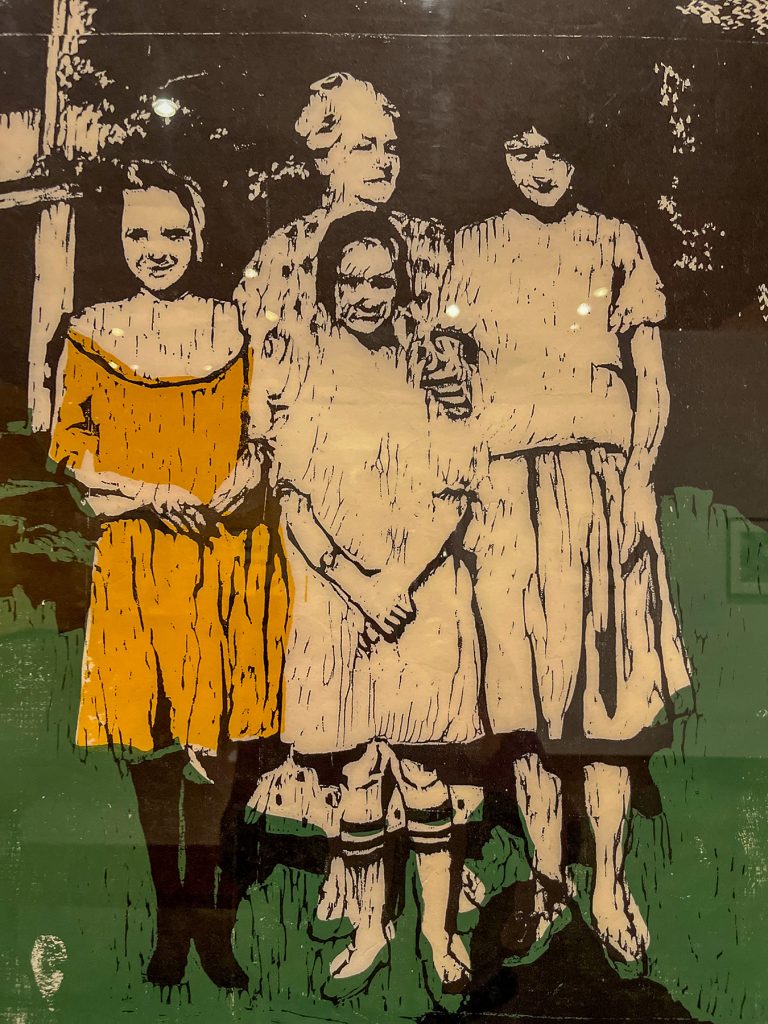 I was fascinated by this organized collection of work — mixed media, yes, and very mixed — that I read as  a cry from fifty years ago from artists walking the cutting edge of photography. After an hour in the show this past November, with so much detail packed into every case and on every wall, I knew I needed more time. I wanted to return this weekend and see it again with friends who are artists, one an RIT graduate and life-long professional photographer.  But the show is over. I’m bummed because I wanted to just bring in other artists and overhear the comments they might make aloud while looking. But too late. Closed last weekend.

I lived through the 60s and 70s, although was a child in the first decade. I learned in school about photography as a fine art, and since my school wasn’t very art oriented, I’m sure everyone did. For example, Ansel Adams — nature photographer from the B&W era.  Commercial photography was everywhere then. Color printing easy. Fashion photography was fabulous and pushing all kinds of design boundaries, so photography as art was a little stunted by its more obsequious relatives, the commercial stuff.

Still, photography was tied to representation – having replaced painting a hundred years earlier as a document of the times. We became accustomed by 1960 to use photography to document the world. Not set it in stone but in a full-color print. In many middle-class homes, starting in the 50s, the art on the wall was a photograph of a painting. Blue Boy printed on a textured board, framed and now sold at Target, etc. The use of printed images is so common that people don’t even notice it. The floor I’m standing on is just a picture of wood printed on a click-together plank of cork.

When we, Terry & Steuart, became art-school students in the 1970s, we knew we must have a camera to document our work. In fact, our first partnership was a camera purchased together with a signed contract between us for its use and dispossession if needed. It was stolen while on vacation at Copper Mountain after we had signed a marriage contract that superseded it. Our next cameras are in a box under the bed. Photography is not longer physical. It’s digital. This relatively short history of photography is the subject of this show. It’s work from the 60s & 70s, so the makers don’t know the future. But somehow they knew they needed to do something to lift their work away from thinnest of a modern photographic print, to do something more than print the beautiful image on a textured board and frame it for Target.

In all these artists’ lifetime, painting became non-physical – a thin surface that in the 50s was praised for its flatness. As I studied art history, I could see how painting went from a realistic picture of (the artists interpretation) of real life up to this point where flatness is the thing, and then color was gone with Ad Reinhard’s black paintings, and Robert Rauschenberg’s all white painting. (The same progression has taken place with jigsaw puzzles.) And then, as I learned in art school, painting was dead.

In studio classes, we didn’t paint, but were involved with art making that involved a lot of process. I worked mostly in printmaking and Steuart in sculpture. We both learned to cast metal in sand or lost-wax methods. Works made in technical media had texture, related to real life, you could see if you looked and knew enough how it was made.

Increasingly, even this physicality needed to give was to the human complexity that isn’t seen, is just in our heads. We started to value making things that were not permanent, not another thing to hang on the wall, not more public decoration. Instead, a thing that said something without being an ecological debt. One example later in our career, we used dead and down Lodgepole pines to make a temporary public sculpture. Essentially, we collected trees that were a wildfire hazard and arranged them into a visual statement. After this was available for view for a summer, these trees were easy for forest workers to clear away and make the land less a threat.

From the 1960s on, we have all become more aware of the problem of art (as well as everything else) as ecologically burdensome. We talk today about data storage problems, but if you make art, you have a bigger problem in having so much real stuff you have to store. Because, really, when is it interesting to look at your old paintings? When is it interesting to look at a painting? And for how long, really?

In the 1960s, art as ‘happenings’ was the hint that art was becoming ethereal, just as photography was becoming digital (although we didn’t know it yet). Conceptual art could replace old boring paintings on the wall. New stuff to see and experience and little ecological cost. Where did this place photography? Hang one on the wall? Boring as painting. Screen savers and wall paper that randomize, change all the time. Doesn’t one get bored with that as well? Beautiful, realistic imagery is just not what makes a deep ravine with multiple challenging trails to diverse elements with interactions to explore. As soon as this became obvious in the 60s, artists starting thinking what they could do with paintings or photographs to yell something like “a human is here, trying to say something with this image.”

As I said, photography was everywhere and necessary in the 60s, onward. The only remaining documentation of the ‘happenings’ and other conceptual art projects are photographs. But photography was also surviving for artists by its technical complexity, like the sculpture and printmaking that we studied in school. You can get intrigued in the acts of the making. Painting and drawing are such old arts that we forget they have technical complexity – but I think very contemporary paintings are trying to bring this back and make the statement – ‘see me, I was made by a human trying to say something.’

This show, what the curators called Transgressions & Amplifications, reminds me that photographers back then felt the changes we now know.  They needed to find new ways to say ‘made by human’. To use the curator’s ideas: they transgressed the boundaries between text and image, amplified the hand-made nature of their work. This push of the envelope of art photography by human means was a great step ahead for art. More like a primal cry than the smart use of technological advances. Edward Burtynsky makes great techy aerial photographs. But they feel intellectual, not emotional when compared to these early works made when the realistic (and physically printed) image was headed for the grave.

When old techniques are used, the artists in this show seems to be illustrating our mechanical history, the processes revealing more of the human hand. They are not nostalgic. It’s a post-modernist questioning of the past, and has that quirky post-modern humor.  At its most fun when some time has gone by. For example, Betty Hahn printed everyday images using a very old technique and crafted them into pillows. Some of the everyday of then, of course, are historical now.

Ed Ruscha’s Sunset Strip is included as the epitome of documentation itself as art. Composition is what makes the emotion. Composition within the frame and also the aggregation of the strip onto an accordion-folded book. Books of My Life, made by Keith Smith, are a hidden gem I couldn’t see by looking into the glass case. I have no idea how many there are, but I’m putting in a request to read them.  Robert Heineken captions his Polaroids (didn’t we all?). Another artist writes her life story on a photograph. Or, at least, that’s how I remember it.

Photos of the Exhibition 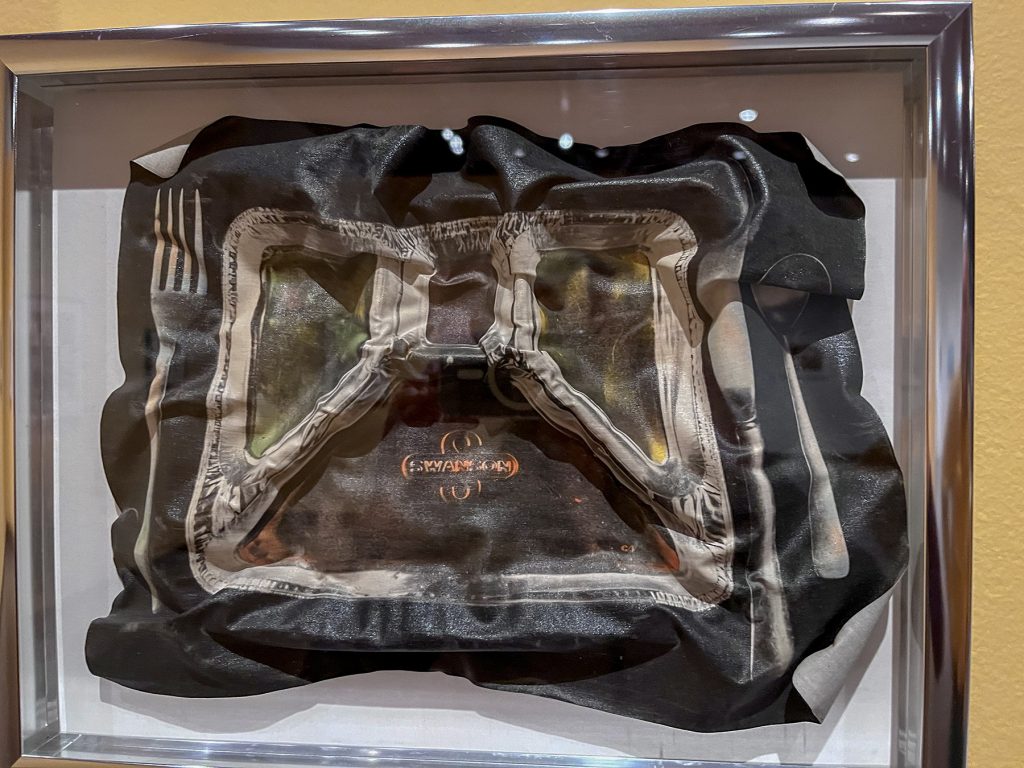 Photo of a TV dinner taken with Daguerreotype process, which produces a glass negative that was then used to make a Xerox copy onto fabric that was then stitched and stuffed. 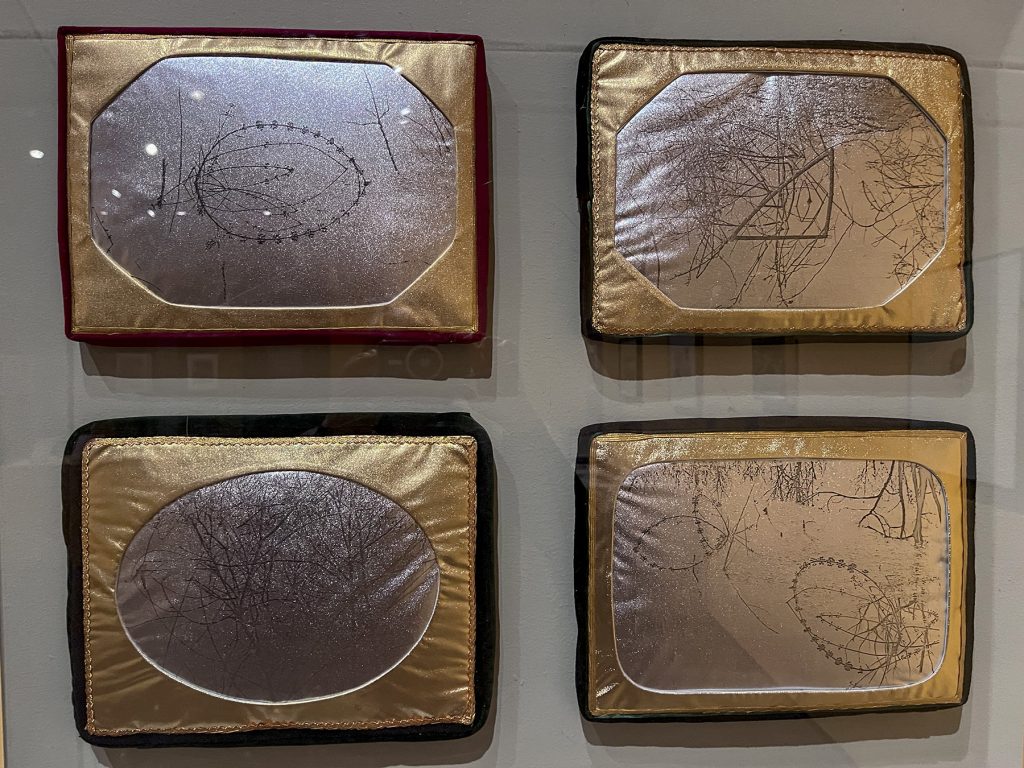 Hahn used the 19-century Daguerreotype process on a copy machine to get the image on fabric. She framed them in the brass and velvet style commonly used on those old-timey photos. Instead of family, the images are the everyday: sticks, weeds. 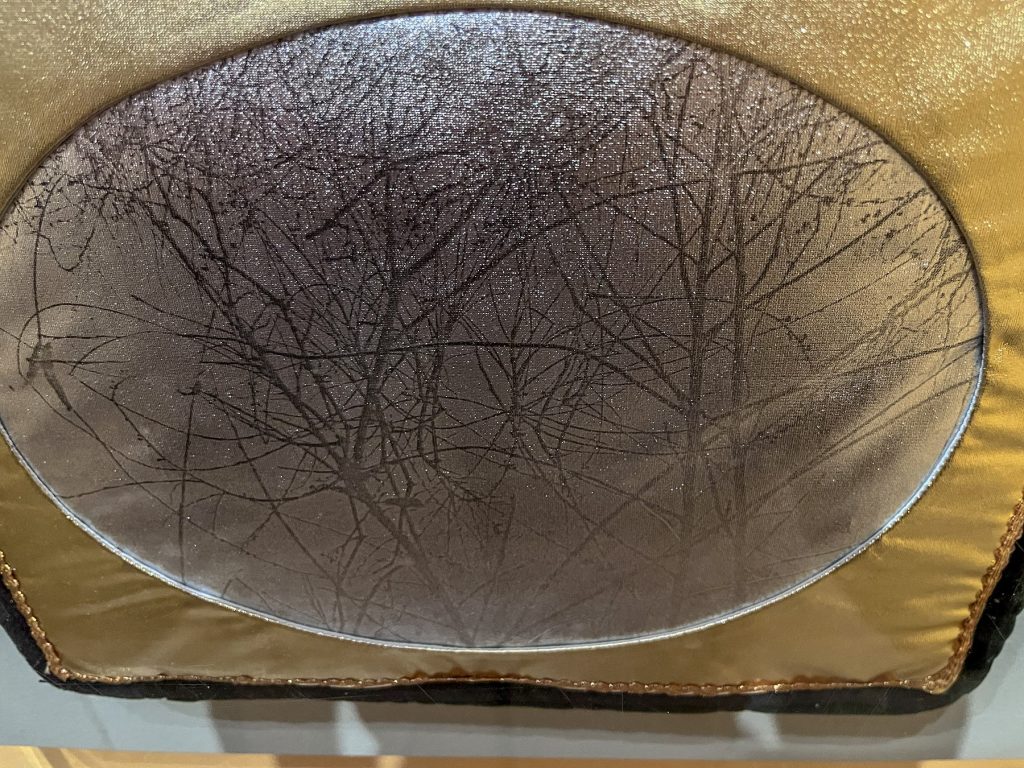 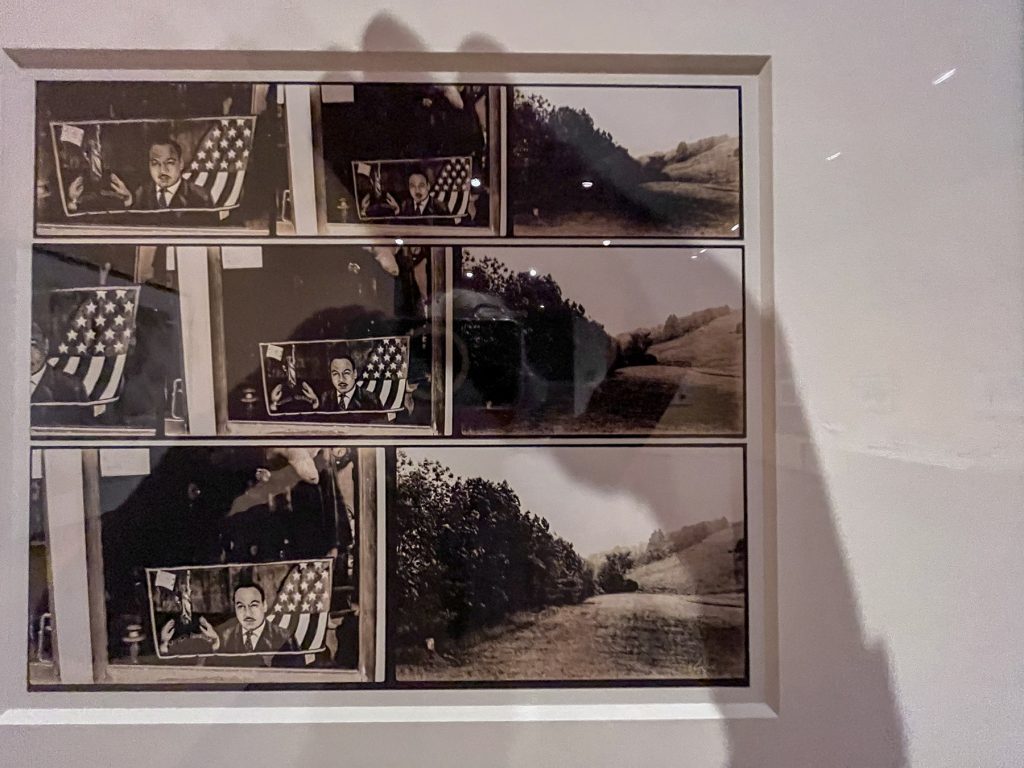 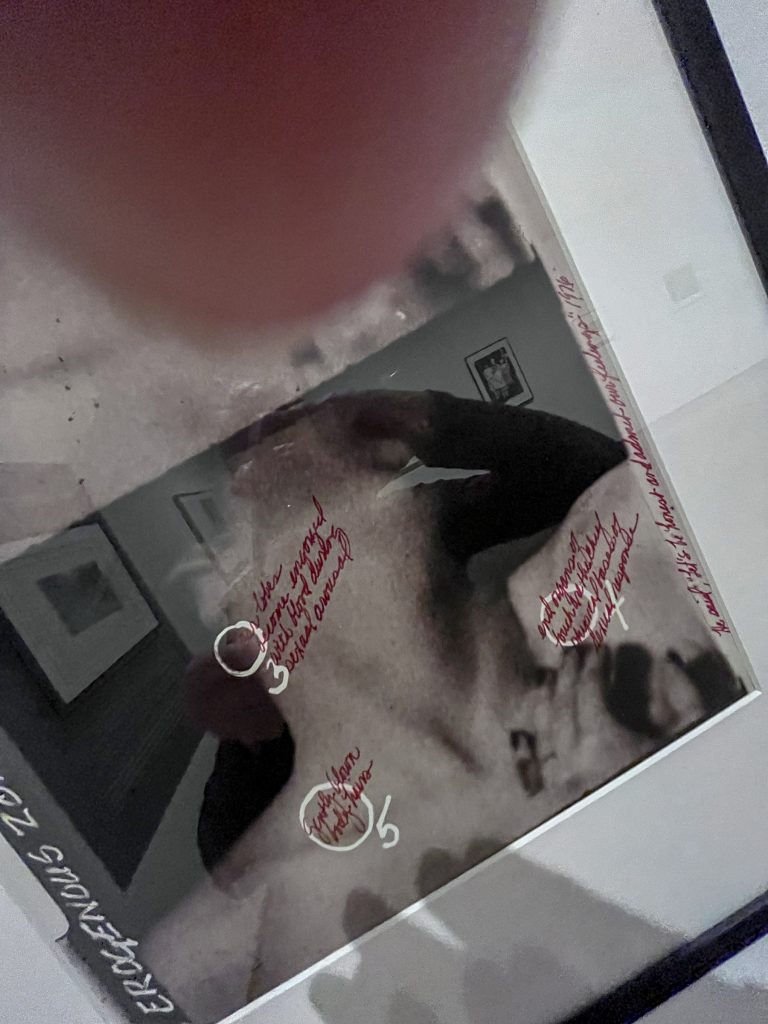 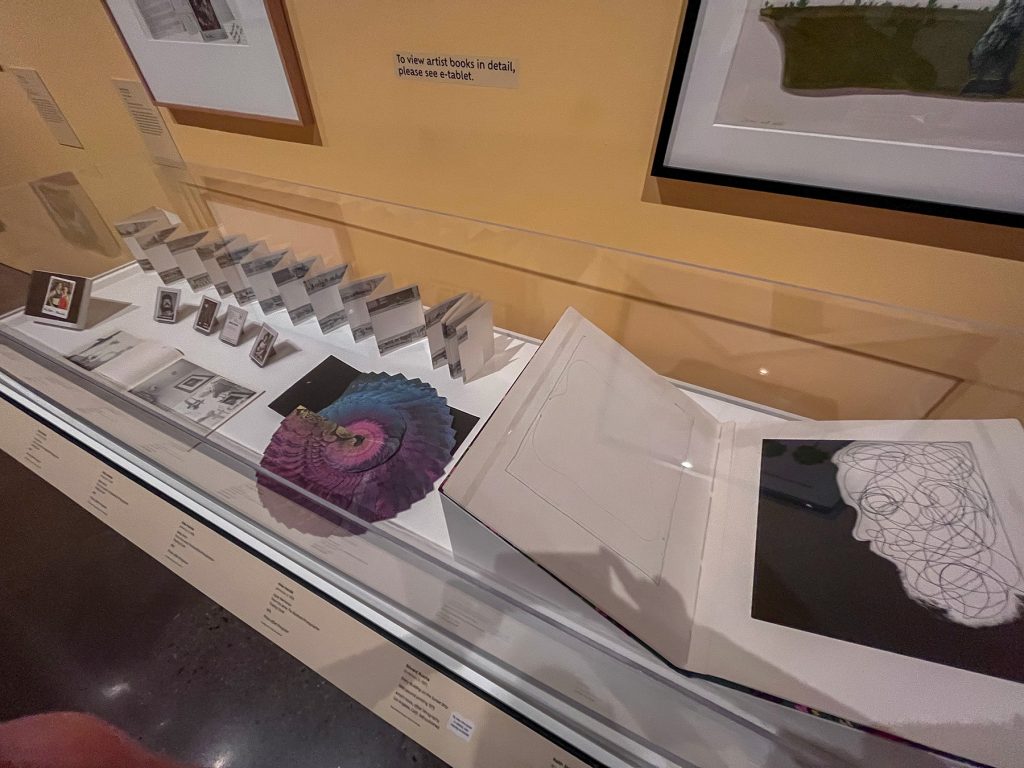 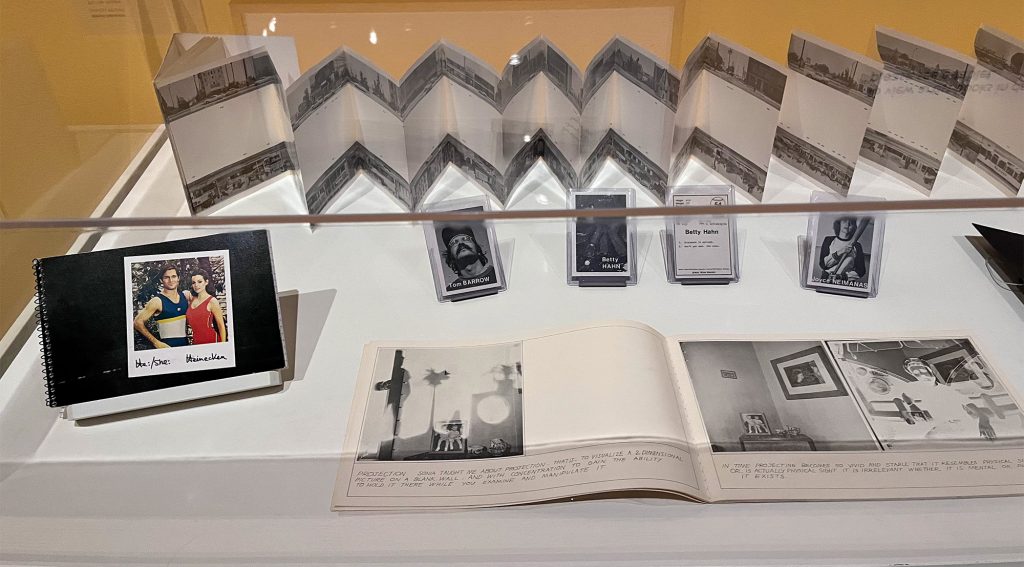 Using a photo process, Hahn directly uses an old, classically-posed, family picture to make a traditional looking woodcut. She doesn’t try to make it groovy to depict that time she made it. There is no ego involved but an emphasis on the technique. Just making it a woodcut makes it feel hand-made and personal. The curators really that it was funny that Hahn pulls off this personal quality, and yet the image was from a found negative, not her own family.