A Frank Stella painting that changes color, a quilt of filmstrips, historical graphics generated by a plotter, and one that is continuously drawn on a computer screen – all these are part of an exhibition I stumbled upon in an old house on Delgado Street in Santa Fe, a house called the Art House, and a show called Luminous Flux 2.0.    The Art House is part of the Thoma Foundation, whose founders are collectors of digital art and this show and new and some of the first artwork that anyone would call ‘digital’ art.

I started to write about the works in this show and was constantly interrupted by ideas for other stuff to make, and how to make it, and drawings in my notebook between the ‘art criticism’ I was trying to do about this show –  to me, that means the show is damn good. 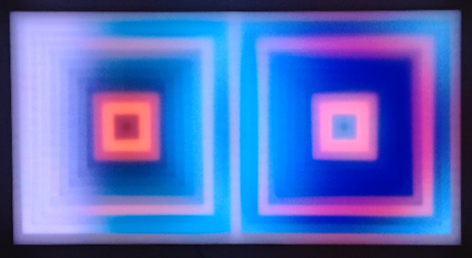 The Stella painting is a lightbox by Leo Villareal called Double Scramble. Made in 2013 it projects color in the Minimalist’s typical geometric pattern specifically the 1968 Day-Glo stripe painting Frank Stella made and gave the same title. Slowly the hue of the LED lights change making entirely different painting that glo brighter than Day-Glo paint, and change the color of the entire room.

Many artists have taken off from Stella – my husband, Steuart Bremner just finished drawing the 11 paintings of  Irregular Polygon Series from 1965-66. Another artist, Richard Pettibone, reproduced the same series in miniature in the 1970s.  We recently seen some nice use of the Photoshop morphing tools and it would be interesting to morph all versions of any one work of art. 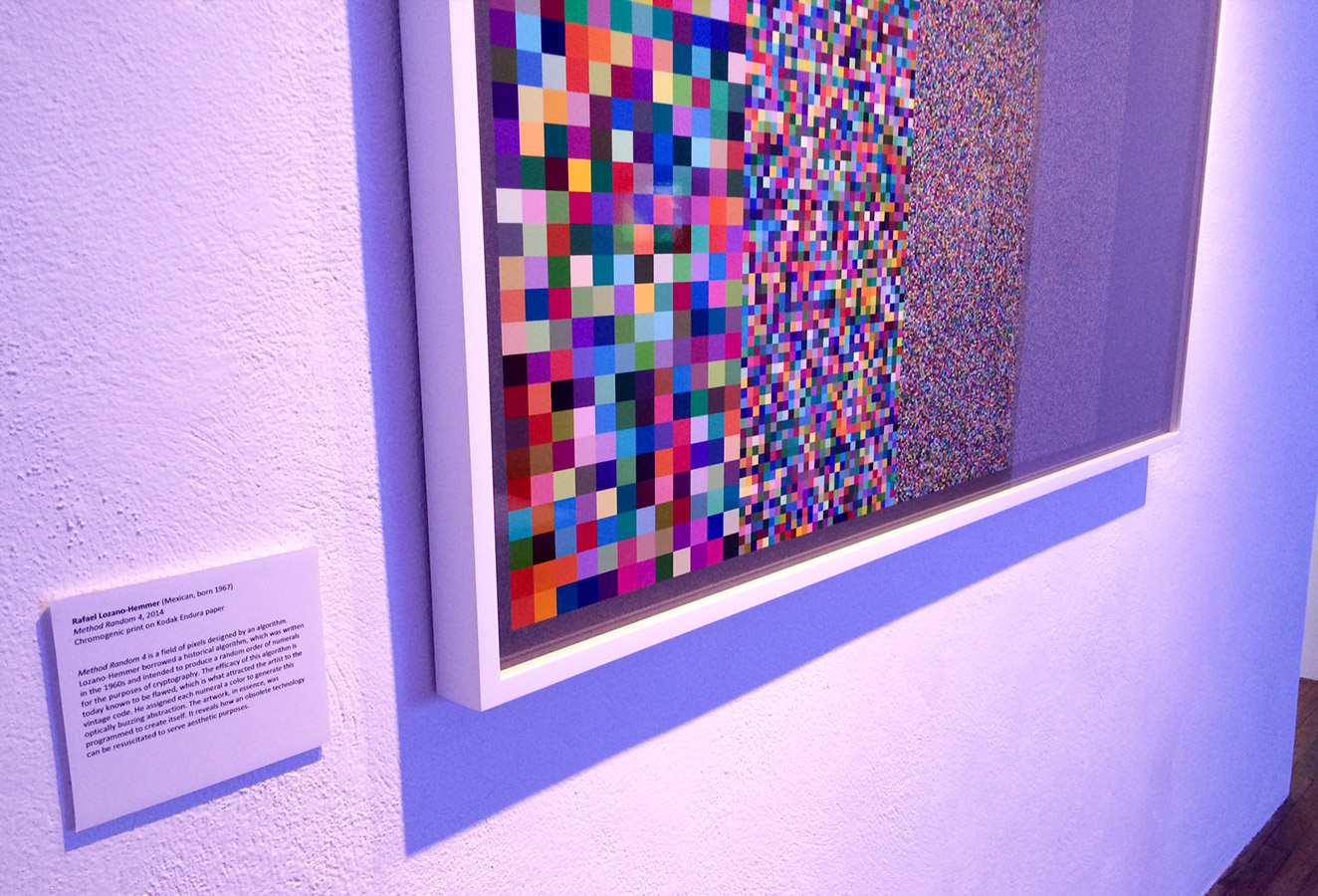 In this same room of the old adobe house is a work of five digital spaces instead of the two iterations the Stella compared. The artists, Rafael Lozano-Hemmer, filled each space with colored blocks based on an outdated algorithm that was designed to randomize numbers for cryptography. A color is assigned to each number output in one go, and then the result is printed as a very nice Chromogenic Print on Kodak Endura paper.

In order to be a good modern number-randomizer algorithm , someone can’t predict better that 50% of the time the next color by knowing the algorithm or from what colors have previously been output.  These prints by the artist – in five scales, each of which output more numbers/colors – should visually explain why this algorithm is no longer sufficient.  Why doesn’t it randomize enough?  If it did, would the color be an even gray when you generate enough number/color blocks?  I’m not sure this piece is doing enough work.  I’d like to see this compared to prints generated by the new algorithm.  Shouldn’t we, as critical thinking art viewers be able to see the difference.  And if not, what would?  To me, it is not enough to have a computer generate something randomly beautiful. 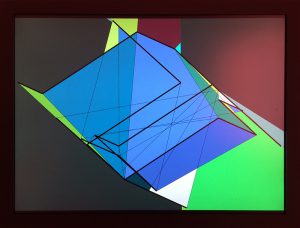 Speaking of just pretty, the piece titled P-777B made in 2000 by German artist Manfred Mohr is a LCD screen that continually draws very nicely. It’s hard to be nostalgic about 2000, but this is how the best computer graphics looked back then, and they have a charm that I get from old sign painting. Keeping this going as a symbol of the progress made in computer graphics kicks off another area of conversation about art conservation.  Another section of this exhibition, includes plotter print outs – as easy to conserve as Leonardo’s drawings on poor quality paper.

Another excellent example of using light and technology is the a piece by –  a lightbox carefully filled with filmstrip fragments woven into a traditional quilt pattern. A corner of it is visible in the following video made to highlight the piece that most represents the title of this show – the most luminously about flux. 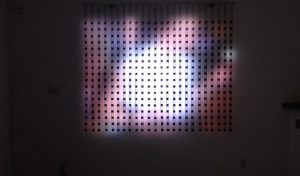 The piece is called Home Movies, by Jim Campbell, 2014. From a distance you can make out the action of the movie although it is blurred by the space-out lights delivering it. The pattern of these lights suspended in a quilt-like array of its on. Up close the piece delivers soft color and insight into the delivery of motion.  The little snapshot doesn’t do it justice, but take a little trip via this video of Home Movies.

There are computers painting and Google searching for images to match the generated painting – image recognition is still in infancy so this will soon be an historic piece.  There are more physical sculptures made from old keyboards, and installations that include video and are the works are owned by the Thoma Foundation, which plans to generate a new show in May, let this and subsequent one run about a year and invite students and art writers to come to Santa Fe and learn about and discuss contemporary art.

LUMINOUS FLUX 2.0: new + historic works from the digital art frontier is the second iteration, and a refresh, of the original exhibition at Art House, an exhibition space in Santa Fe, New Mexico, dedicated to sharing works from the Thoma Foundation collections.