From Native Americans, the Spanish to Artists Modern & Post-Modern

I have only lived in New Mexico for a month at a time at most, but visit often. It is like the family cabin from your youth that still influences you.

My husband has memories of Taos framed by his parents and siblings skiing in the ‘60s when the resort felt European – no condos just full-board lodges. The ski instructors ran the inns. We brought all his English relatives to Taos and Santa Fe because you just don’t see places like it on the British Isles. Our son went to UNM in Albuquerque – the first college his father attended – because it is a great school for art and film.  Northern New Mexico is marked by an appreciation for and maybe that’s why it is “our family cabin”.  Just like those trips to your cabin, each trip to Taos is influenced by the people surrounding you each time. 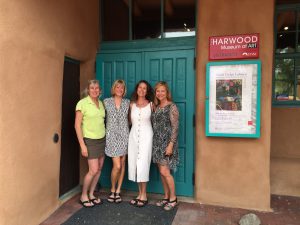 This trip was with three women friends and three women whose story we learned at the Harwood Museum of Art:  Mabel Dodge Luhan, Frieda Lawrence and the Honorable Dorothy Brett.

Freda Lawrence and Mabel Dodge sit around a table, smoking, talking
smiling – ‘We were on gerunds,’ my friend said to me, “and the new teacher
took us back to nouns. I was expelled for exposing him.”
She had to apologize to this man and her entire class to continue.
Shame does not fan intellectual curiosity.

Freda and Mabel plugged into the same current, handed an ear
trumpet to Brett who transcribed their wisdom, tapping out details
brushed into big scenes painted in the socially conscious way
that came with economic depression. Royalty un-throned, Brett’s
old world money didn’t come West. She transcribed Lawrence,
too, and made due selling paintings of Indians to tourists.

You decided to move out West to New Mexico and you settle on a ranch near Taos, New Mexico with your husband who is disappointing you as an artist. You fall in love, almost immediately, with a Native American man who serenades you with his drum all night. You invite the most celebrated writer of women-friendly literature in the world and he comes with his wife (Lawrence), and their painter friend (Brett). You are Mabel Dodge Luhan who said “I want to know everyone and everyone wants to know me.”

Lawrence could well have been like James Joyce. When asked what he thought of Gertrude Stein, Joyce said he couldn’t abide strong women. D.H. didn’t get along with Dodge-Luhan. She gave him a ranch so they’d stay – but not too close. She remained with the drummer, Mr. Luhan for the rest of her life. Romance my girlfriends loved. He gave her syphilis, I said. 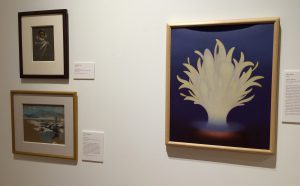 Although the Taos Society of Artist started the job, Mable Dodge Luhan’s money and influence made Taos an art center. She did it with the people she brought from New York and Europe, to Taos with mutual respect and interaction with the local people. She attracted the Stieglitz art group from New York which brought photographer Paul Strand, his wife painter Rebecca James, and Georgia O’Keefe to New Mexico; the AshCan school – John Marin, Andrew Dasburg and others from New York who were pushing the boundaries of American art. American artists who we know from art history – from the powers that recognize artists although her are probably people doing what Picasso did but we will never see their work since it was long ago thrown away by the artist’s survivors. Recognized American artist seem to be clinging to tradition – Mary Cassatt is the only American Impressionist. The Ash Can school was radical for painting ordinary life in the1920 – Frenchmen: Corot, then Millet did this as early as1820s. The 30s demanded social realism because the WPA and FAA funded art. But Dasburg by this time is in New Mexico, and Georgia is supported by her husband. People in Taos are just making it work.  The primitivism – heading there on purpose – Dorothy Brett is selling paintings of Indians to tourists, and Indian artists are doing the same – or just selling Indian art to tourists. And it does seem that selling work to someone is what means one is an artist.

The work in this show is a little bit from every one of these people and a lot about the life of Mable Dodge.  History buffs can read a good story on the walls and there are enough paintings for people who like art.  This is not contemporary art – it is a story of how contemporary art might have come to be.

The friends who shared this experience with me discuss it, here.