What am I missing? 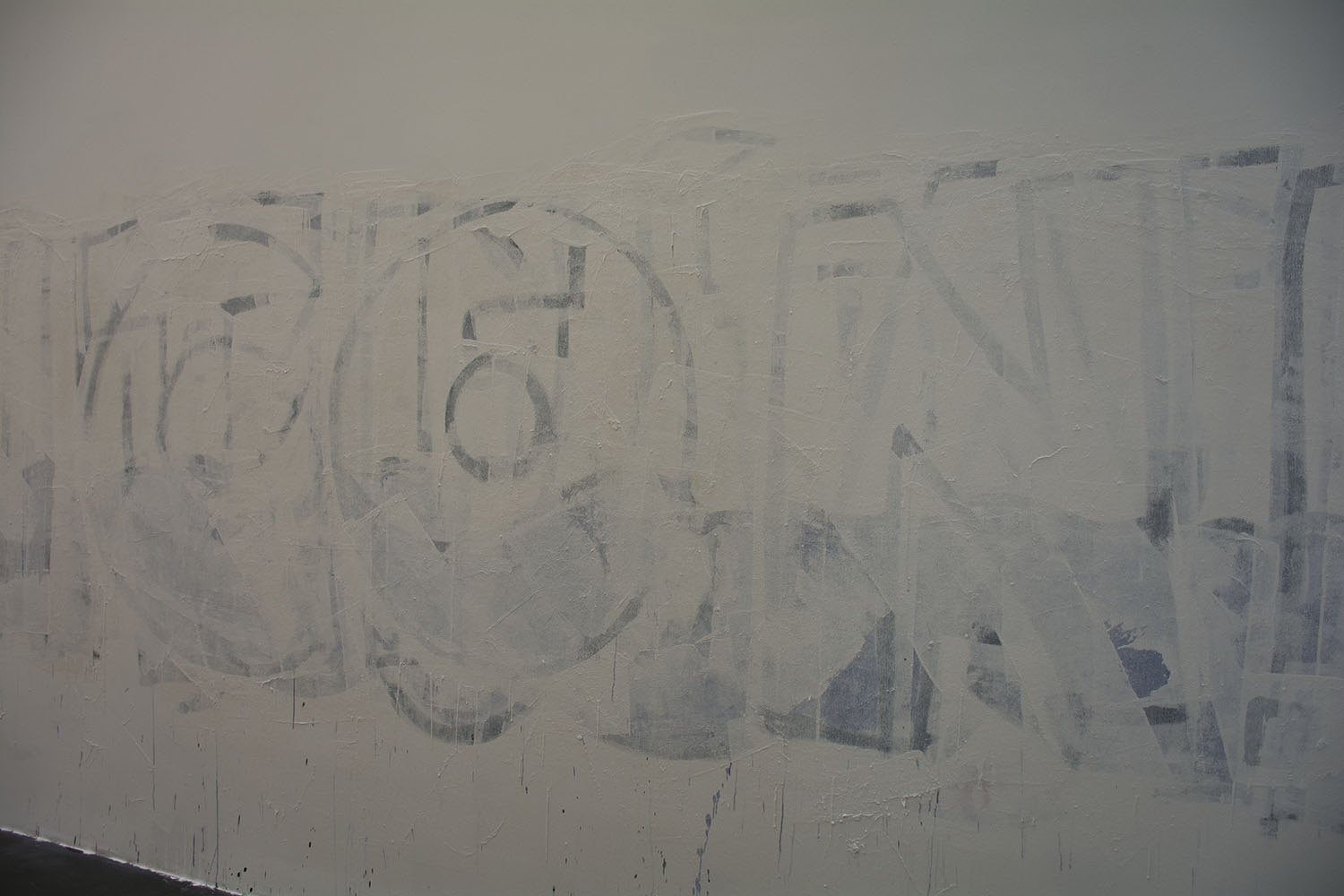 I can’t read the poetry on the wall – can’t know if it would move me.  I can’t even google it because no words are clear enough to search on. And knowing that is was white washed over – that it is like repaired graffiti – what was written here may never have been published elsewhere. It may not be on the web.

What if it was a Banksy? A graffiti that is worth some money, no matter whether it was in a museum or not, would it have been left? What if it is some insightful political statement, like THE solution to our broken democracy, and some idiot whitewashed over it because it felt dangerous?  Is it a whitewash like the

emails to the media from Debbie Wasserman Schultz that were intended to screen Bernie Sanders from public attention?

We have missed an opportunity. We can’t read what was written.

This piece, called Whitewashed, is one of several in a show called Set Up, by Guido Ignatti, an Argentinian artist who was trained in sculpture and set design, who has shown in his native Buenos Aires and participated in shows and performances in Los Angeles, and Europe, and who is having his first show in an American museum – at the Museum of Contemporary Art Denver.  And who, until recently, published a blog of non-academic art criticism. I have not read any of it because my Spanish is not that good and much as I google contemporary visual art – I rarely come up – let alone someone writing in Spanish. Some things are hard to find.

This exhibition covers the entrance level of the museum. You will probably not see the mural piece first, but instead go from a darkened room, to a florescently-lit one and then move to this more open space.

And you’ll find that Ignatti’s other installations, here in the MCA – except one – also obscure something else that may be – if we were not missing it – just what we need or want. 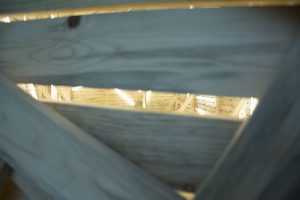 Locked Room – is a room we can’t enter. There are two openings that reveal the constructed room, but they are blocked by the structure of the room. The only way to see the entire constructed room would be to remove the museum.

On the night of the opening, the line to get in went the length of the entrance and down this second side of this neat, square of a black glass building, and along to the window that looks in on this room. From outside, you can see this room you can’t get in. Out in the line, as the night got later, there were many people who would have to wait for someone to leave in order to enter. They waited, hoping something worth seeing was inside. 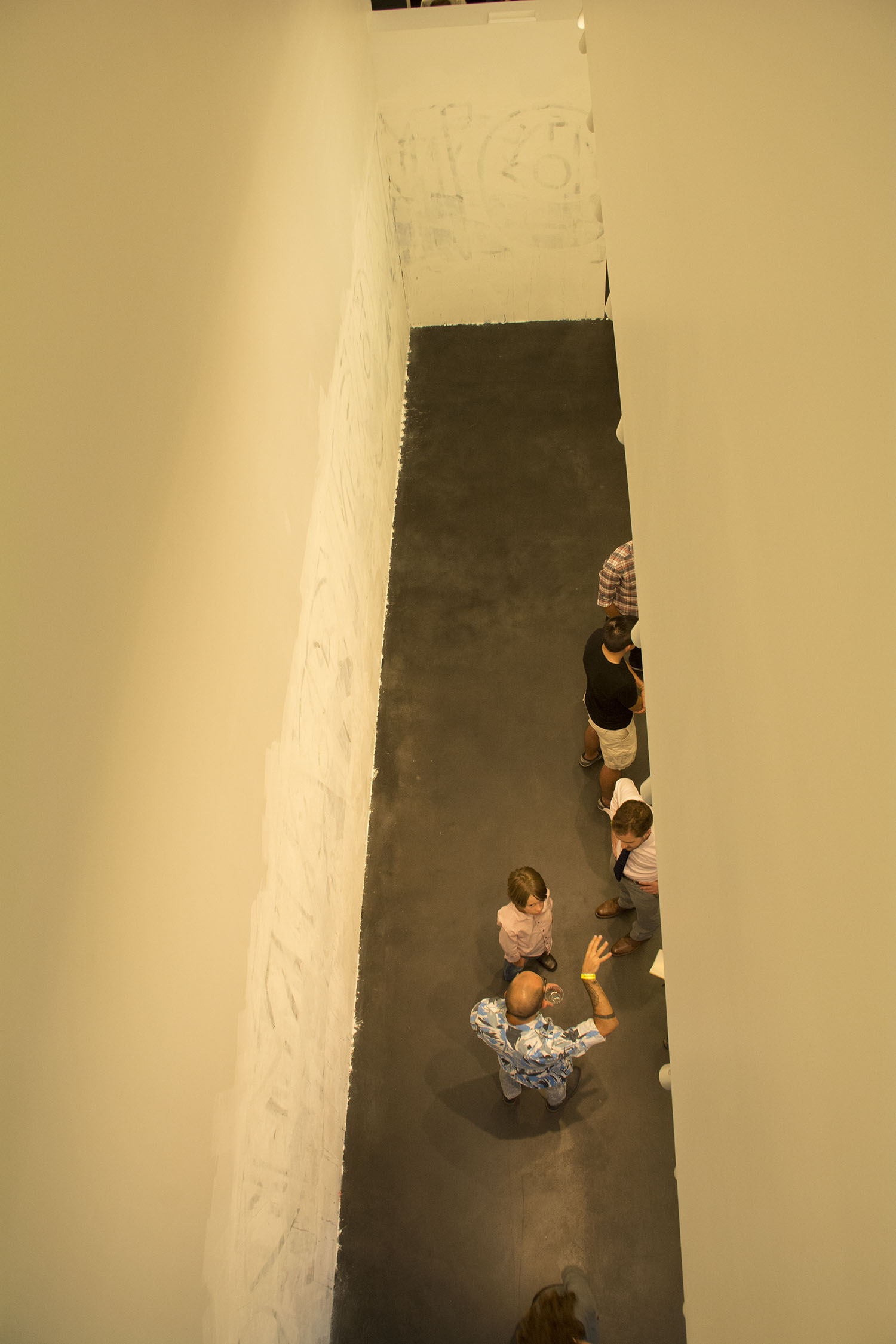 Ignatti’s work, Tapiados, at the David B. Smith gallery is similarly constructed – a light inside and two-by-four boards concealing it.

During the construction of the work and throughout the opening, Ignatti talked with visitors about his work.  Standing outside the locked room, next to his mural, which is also not fully available, the artist himself is very open, and was happy to answer questions.  A young boy about 3-feet high, came over with his father who said his son wanted to ask the artist a question.

“What are the lights inside for?”

“To fill the space,” Ignatti said.

Light makes the painting in another gallery – we get our bodies between the projector and the wall and the painting is as black as our shadows. In this shadow we can see that the ‘painting’ is projected on plywood.

If we miss this detail – it is easy to dismiss the ‘paintings’ as computer-generated art, a thing that leaves me cold, and false beauty.

If you take the time to think about where the art is in these paintings, they become more interesting. Is it the light, the slide or where exactly?

If all these barriers to what we are being shown is too much of a visual assault or provocation, the big gallery has “Recovery Systems for Facing Catastrophe“.

Plants have geotropism, Ignatti explained. They seek the earth and the sun. Giving them those two elements and some help – what he called ‘orthopedic’ systems – they may recover, in possibly interesting visual ways, from an apparent catastrophe.

Some are reacting better than others to their current situation – their present is visually apparent and not obscured. What has happened to them is also very obvious.  Unlike the whitewashed wall, we know the past, but we can’t see the future.

“The piece of art is alive,” Ignatti told me, “and it’s funny but I haven’t sold any of these pieces. No one wants to be responsible for taking care of the art.”  The future of the art is uncertain.

Ignatti made a video of the mural making, the writing of parts of a poem and then whitewashing over it and writing more. He said the style of lettering reminded him of political-commentary (graffiti) that is common in Argentina.

I could know the past of this work, but I don’t want to be able to read it.  It would be like neuroscience proving that consciousness is just physical – electrical or chemical reactions – and that there is nothing more about being human than those reactions.

For more information, visit the MCADenver.org on Set Up. And look forward to the catalogue of this exhibition curated by Patrick Greaney.  Catalogue link to Guido Ignatti Set Up.