The boundary of a place, generations of a people, time – all these are much wider than, say, a pencil line. But borders, family trees and time are often drawn with single lines. The 2016 biennial exhibition at SITE Santa Fe, called Much Wider than a Line, fleshes out these multifarious lines. As a primary example, managing curator Candice Hopkins dedicated the show to the people who first lived on the land we call Santa Fe, and to all the layers of people who did and continue to inhabit it.

Sharing territory meant different things throughout time, but think about how the same land has been shared over time – we step on one another’s toes intellectually rather than physically.  Shared territories is one of the biennial’s themes, and Lewis de Soto’s photographs are clear illustrations of this, and the other two: indigenous knowledge and vernacular strategies.  His large panoramic photos of Southern California – all without people, even though we think of that region as very populous – feature natural landmarks that are called different names by different settlers.

De Soto is one of more than 30 artists from 16 countries within North & South America in this sprawling show, which is trying hard to be more than an exhibition of dozens of contemporary visual artists filling a vast white space. This idea was new when SITE held the first international biennial in America, in 1995, but the directors of SITE want more. They’ve closed the geographic scope to the Americas, and widened the search by enlisting a handful of curators rather than just one. In addition to Hopkins, there are five curators who chose artists to show.  Artists were given two years to research and prepare for Much Wider than a Line, which opened July 16 and will run through January 8, 2017.

Three terracotta totem poles stand outside SITE. They are pleasant to see, and not just an esoteric idea, although there is one. The artist, Mariana Castillo Deball, is wondering why a people who are a living culture would make work as if their culture was dead. She had the pieces of the totems made in a factory in Oaxaca, Mexico, and asked the artisans to not make only ‘historic’ reproductions, according to curator Pablo Leon de la Barra. Deball asked the craftspeople to make one totem representing the past, one about daily life today, and a third for 100 years in the future. 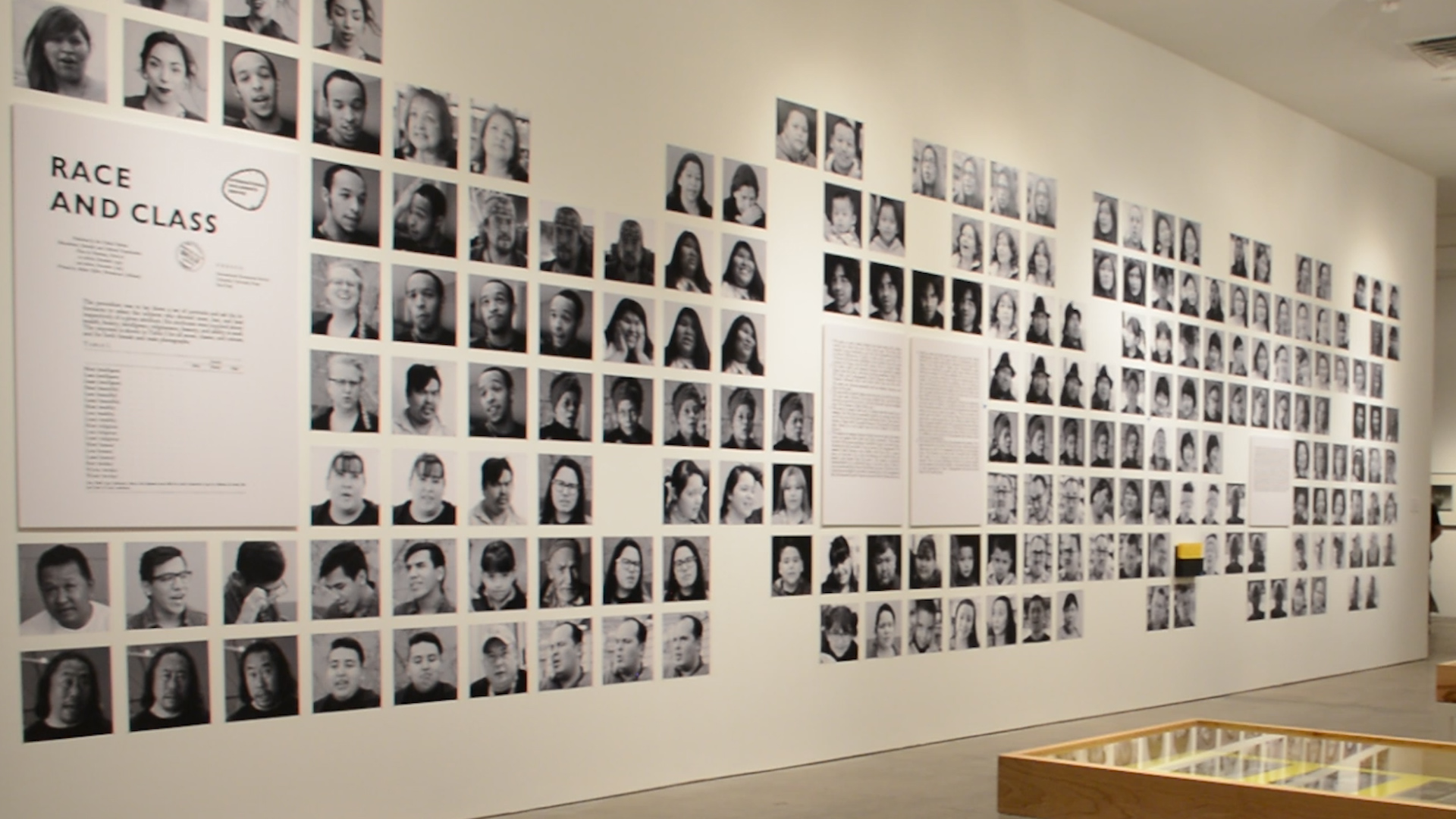 Inside, artist Jonathas de Andrade, shows a wall full of portraits of people he met and photographed in Santa Fe while they talked about race and class. Each person is represented about the same size and in B&W.  The artist presents these diverse people as imaginary foder for a 1950s study conducted by Columbia University where focus groups were shown similar portraits and asked to guess “who is the smartest?” “who is the kindest?”.  Other works in de Andrade’s portfolio referenced the 1952 Study on Race and Class in Rural Brazil that featured photographs by Pierre Verger, whose shots of Bahia natives in trance states hang on a nearby wall in this biennial.

Verger died in 1996. To include his work deepens the theme of understanding indigenous-ness and the idea of sharing territory – in time as well as space. Similarly fluid in time, is an architectural and historical study by Conrad Skinner of the now-closed Paolo Soleri Amphitheater at the Santa Fe Indian School and a survey of the bilingual literary magazine El Corno Emplumado | The Plumed Horn co-founded in the ’60s by Albuquerque-based poet Margaret Randall. 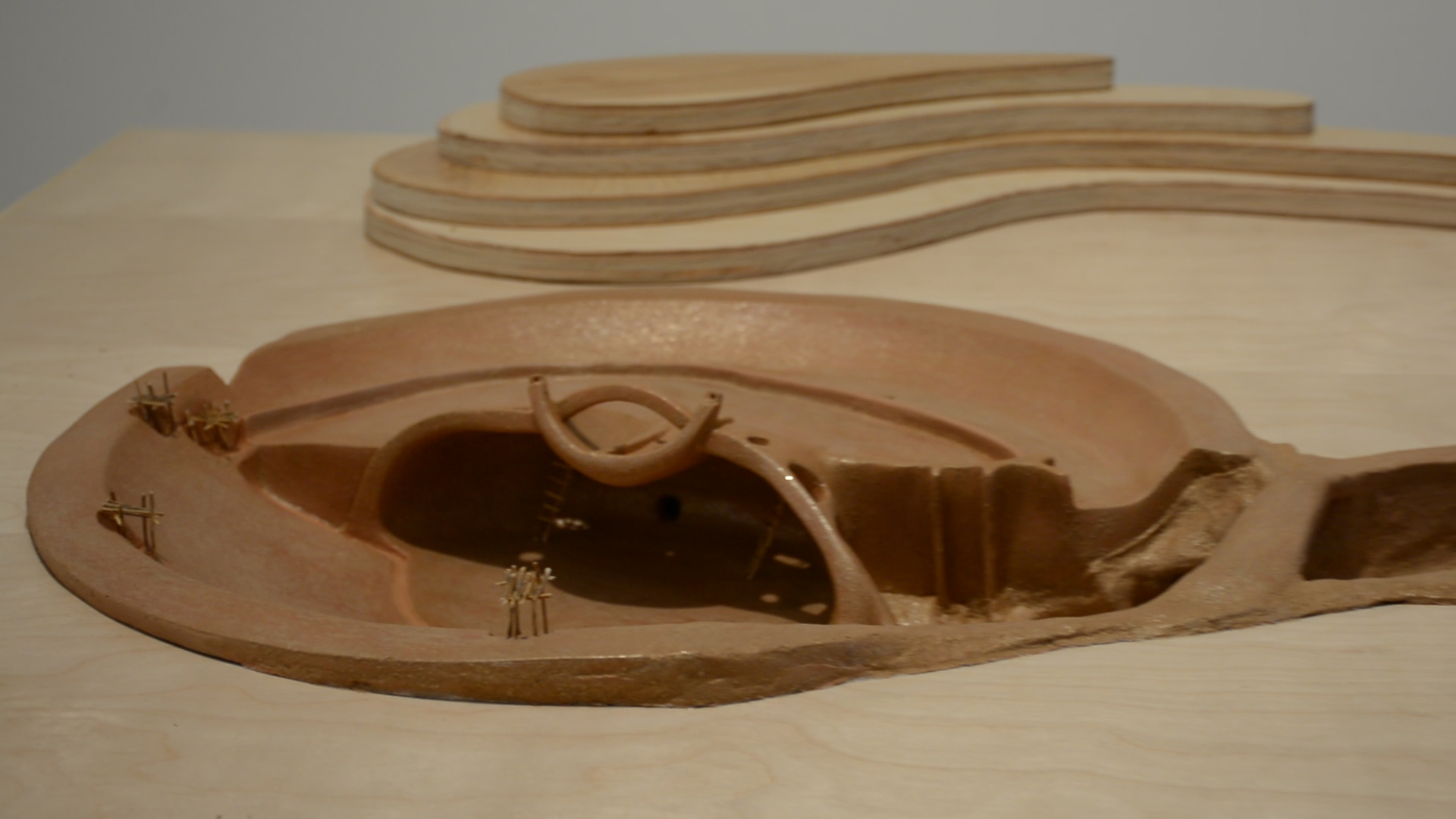 As a whole this exhibition is short on color and long on text. Breadth come from the diversity of people it calls its artists: from Skinner – an architecture historian from Santa Fe, performance artists, activists, conceptualists, weavers, photographers and videographers, to  Abel Rodriguez – indigenous, septuagenarian, illiterate botanical illustrator from rural Columbia. Time creates the drama.

It is nearly impossible to come away from it without at least one poetic idea. Located in the Railyard district in a large warehouse-like space, SITE is not crammed with art in this current iteration; each work feels like it has plenty space. However, SITElines.2016 – Much Wider Than a Line may require a second visit and a margarita in between.

For a quick visit, watch the SITEline 2016 overview on YouTube embedded above.

We attended the Media Preview on July 14, and much of what the curators explained is written on the wall on note cards by each piece. This show is most certainly contemporary post modernism that Tom Wolfe was talking about when he wrote The Painted Word – to get the full intention of the artist, or really have a clue what the work is about, you have to read.

If you’d like more, see Instruction Manual for SITElines.2016, and it includes the following links to other sites with info about Site’s biennial – Much Wider than a Line.

To learn more about:

Mariana Catillo Deball’s sculpture – 3 of 7 totem poles made for a 2015 exhibition in Oaxaca – titled Who would measure the space, who will tell me the time?

Javier Téllez’s film To Have Done with the Judgement of God, read the article in Pasatiempo, the arts section of the Santa Fe New Mexican.