— Just the blacks of B&W photographs covered a few walls when the MCA Denver opened on July 15th with a party, a party not everyone standing in line was able to join. It was crowded with colorfully dressed folks and when the blacks were printed on reflective surfaces, the folks made these prints black and colored, while the melodious voice of one leader of the Black Pathers filled the entire floor with auditory smoke.

The voice came from a video titled My Education: A Portrait of David Hilliard, which was playing on three separate channels, showing the visual story in a roundabout way, as Hilliard tells it straight. We tour the Oakland neighborhood where the Panthers where formed and where its Treasurer Bobby Hutton was killed by police in 1968.

Throughout this show, text and images give some information, but more often than not, the work just gives a hint that there is more behind all this black ink.  On a second visit to the show, a docent explained that there is a prominent letter in each photo printed on some layer of the multiple black layers. Identify it, and you can trace that letter to the list of photos used for the installation and get its title, date and place.

These clues are difficult to find in the blackest pieces – black on black paintings that you can’t really see straight on. They confront you with solid black. Walk away, and a sideways look reveals that some parts are glossy and others are not, and a letter or a word is identifiable.  We made the above video to be similarly obscurantist – huge chunks of the conversation were cut out and hopefully those were the more boring ones. An air-conditioner unit humming near where we were having a drink and this conversation tried to help with the obscuring process, and we’re sorry about that.  It was too much.

We do talk about the bigger theme of the show that we get from a wall-size collage with the big letters  – the ones that starts this video. This quote referenced an interview with (often obscure) filmmaker Jean Luc Goddard and included the line ‘my name was doing me harm’.

Another collage in that room lured us in, and did the same for many other people, being made of several chunks of readable text and photos of faces: one, likely from an art magazine, was about how technology makes our role in the world confusing, and included a photo of French celebs in the 60s with another printed chunk about ‘beauty being something that is already known’. We started a long conversation about these text and then got into the  whole point of seeing a show that revealed a lot but didn’t give it away.

One of our group said that this African-American artist didn’t make this art for me. But seeing it, caused me to write the following poem the next day.  Isn’t that what art’s for? 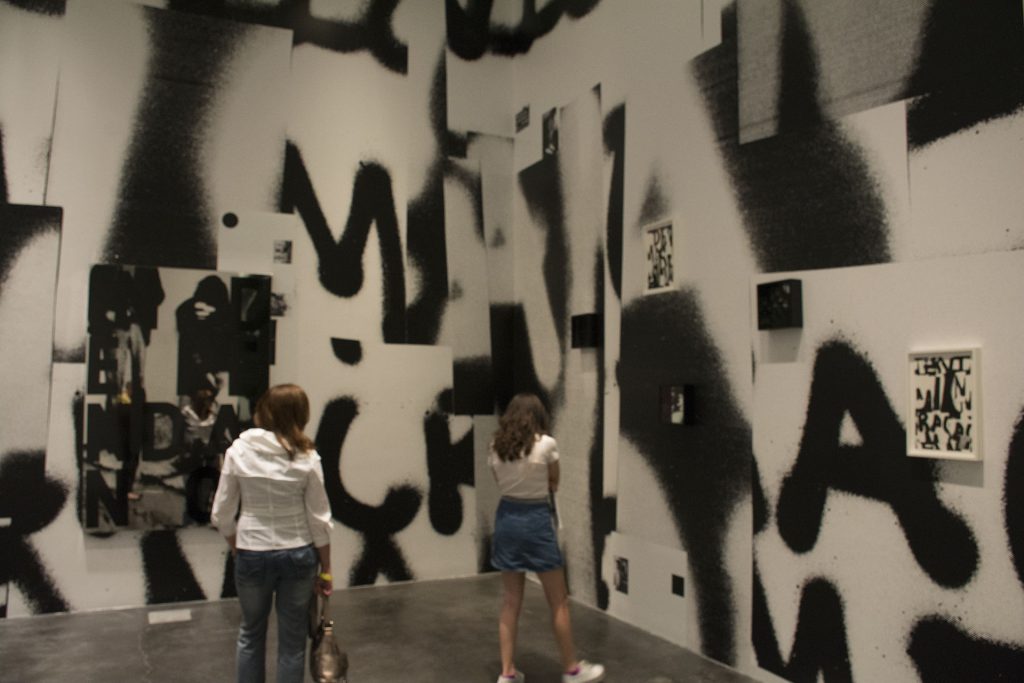 sense. Colored yeah. Black paintings
or white washing are obscuring
subject to the point of imperceptibility.

Blow up a picture to its points or
pixels and pattern is all that’s
left – eliminate color and the only
place left for any thought is in the
non-pixel – the no point. 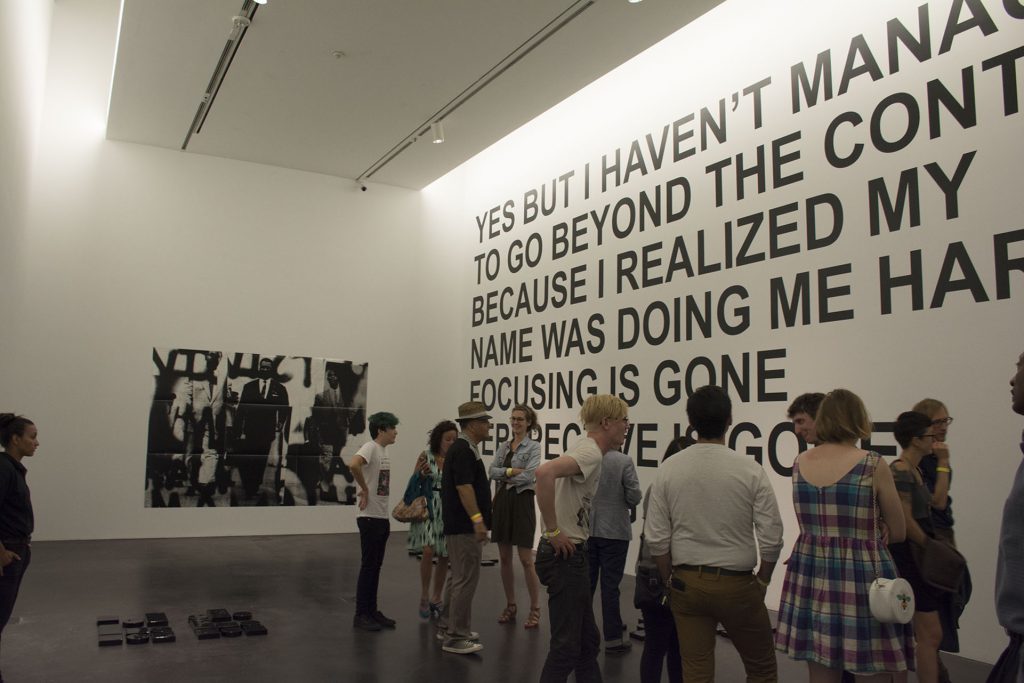 break all and you are pointless.
My teenage boyfriend was imperceptible
in the dark who I loved to show off
the bigotry of my family.

I pay my traffic tickets
now – even though they are still a big
financial burden. But I do not accept
the humiliation.

I negotiate the code not to find the reference
that is the answer, but because it is hidden.
The answer doesn’t come with the one piece with text
Jean Luc Goddard’s words or my rebellion 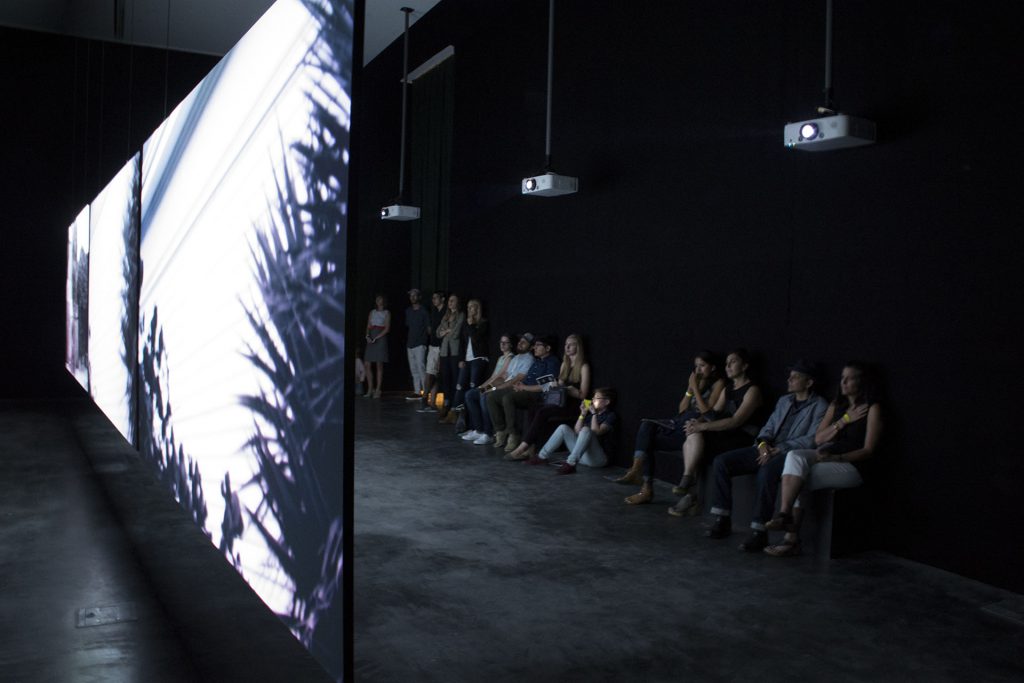 Mary Margaret won the civility award
that was passed down through her family.
Mine were scrappy bigots who did
the wrong thing. Raised me wrong and
got an independent thinker – no movement
for me – who sees no problem with a
political revolution.

Change and accept that your daughter is 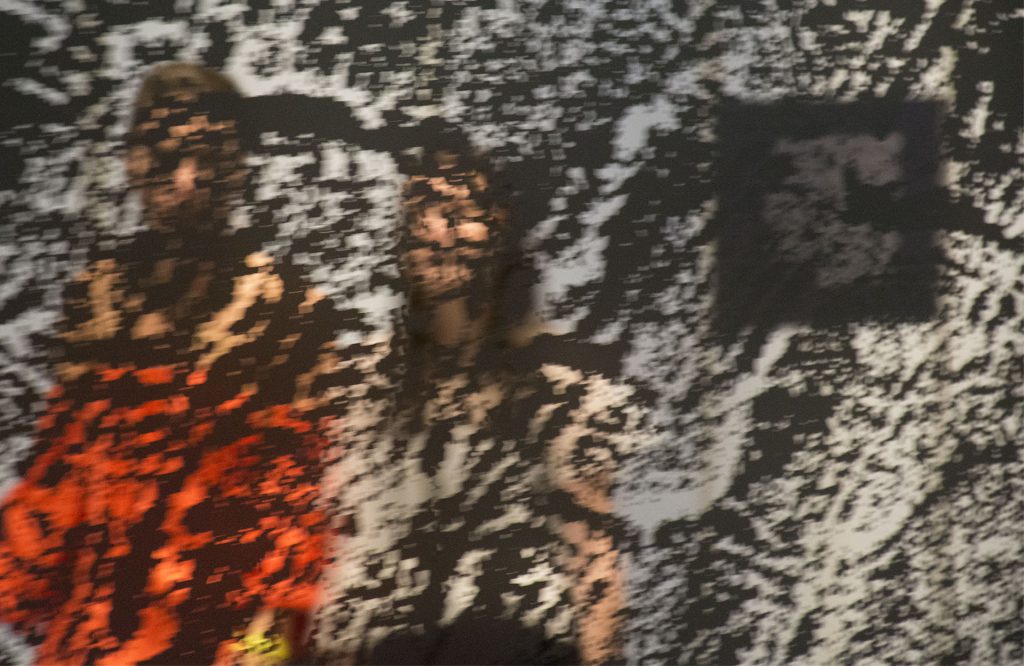 dating a black man. It was easier than
managing the good salary that went
with the stressful job at the conglomerate
company that transferred my dad from
a delivery man to a traveling sales manager
— from a hometown hero to a nobody.