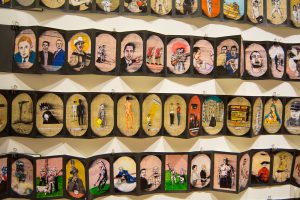 I wanted to see these books – hand made, accordion books drawn graphic-novel style – that feel like a journal of a vivid, rich life. I didn’t know Hassett and just stumbled into a beautiful memorial exhibition for the man in the Harwood Museum. The museum’s web page about his exhibition described someone I would have loved – ‘an angel-headed social-justice advocate’.  I’m a generous reader of Jack Kerouac – even his angel-headed poetry – and admire a person who hopes for the best, and works for it. According to this show, Hassett was that kind of guy. Someone born too late to be a Beat and maybe died too soon to help the new Resistance. 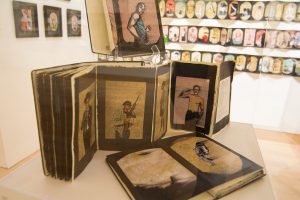 The size of these books draws me in close and so reading a few beautiful lines on the drawing makes me want to read more of Hassett’s poetry. Writing this today, I see how lucky it was to stumble in and see this small strip of a life. The exhibition is already gone.

It was in the ‘alcove’ – a place where the museum intends to use to emphasize local art. This alcove is in the middle of the beautiful main gallery that is art museum white while revealing its New Mexico craftsmanship. Its walls wear well the big paintings from the Harwood’s collection. A little manufactured wall in the middle forms the alcove and it makes the space break in a nice rhythm. I look around: see this intimate show, paintings, the architecture instead of a big box.

Hassett’s books are images of now and he makes them stand out by painting the paper black – probably around them already standing on the page — and the act feels meditative. The figures are ordinary, long lean protagonists with not much to support them but their thoughts. In one image, there is a Paul-Ryan-like figure and another official looking sort. Ryanesque man says:

“Bladders of urine will rage the quiet scent of peaches”

And I feel the disconnect between these guys and how odd it would be if they spoke in beat poetry on the House floor, as the companion to the Ryanesque man says:

“With no hope of any other marvelous flavor there in the night house of the body.”

Political poems — I need to give them more time than I had in the museum. I’d been reading Achieving Our Country — a book of lectures by philosophy professor Richard Rorty. Rorty talks about hope and pride in the American experiment toward true democracy. He recognizes mistakes America has made, but urges us to keep going on, to achieve the better society, and then keep going to achieve an even better one.

“In short, we, the black and the white, deeply need each other here if we are really to become a nation — if we are really, that is, to achieve our identity, our maturity, as men and women.

-James Baldwin, The Fire Next Time

Hassett’s books and Rorty’s lectures appeared together in my sleep to give me an idea. The idea is an online news site where the text is poetry – animated. It’s on the web so the audience can come whenever they want. The text would tell me the history of the actions by various people running the government. Sources who study these people record the actions, and connect the dots of their work. These folks are animated  walking along ordinary sidewalks. Backwards walks Betsy DeVos when she is ripping up the protections against predatory student loans so that her loan company could continue to make excessive money. Someone like Hassett walks quickly forward toward Achievement. And James Baldwin is walking right along side.

-James Baldwin, The Fire Next Time