DENVER — Clyfford Still Museum
SEP 29, 2017 – JAN 21, 2018
Red attracts attention. Blue recedes. A horizontal line is a horizon: the space between sky and the surface where we are. 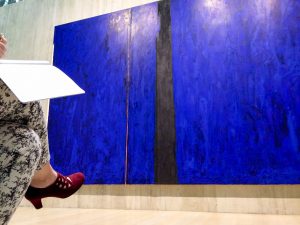 See any image and think back. Go back through personal and current associations with that image, and keep going back. Does every image do something universal for all of us, something that our common ancestor felt? Does the image draw something on our vision cells dictated by our DNA, which is 99.9% the same for every human. 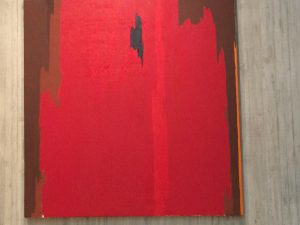 Still & Art is the current show at the Clyfford Still Museum, where all the shows are Still’s work. The creative diversity of exhibition that the museum has showcased with the limitation of one artist’s work is continued with this one curated by David Anfam. The concept is that Still knew a lot about art and art history, and although he famously said his would was influenced by no one, Anfam has brought into the museum’s galleries a plethora of suspects. Reproductions of VanGogh’s, DaVinci’s and other abstract expressionist works are on the wall next to works by Still. Anfam documents how and when Still would have seen these works and while a very self-directed artist Still did look at a lot of nature, popular media and art. To help viewers compare the influences to some of Still big works, the museum hands out a augmented-reality device that you carry around the galleries. Pointing this device at the wall virtual paintings pop up next to the Still painting. 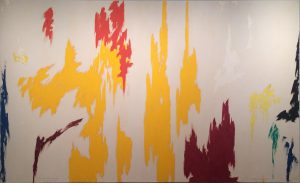 Why does this curator’s highly intellectual art historian’s gaze at Still’s influences make me think that Abstract Expressionism takes us back to a common human reaction to any image? Some of the virtual paintings that are in the gallery with Still’s paintings are Van Gogh’s, his classic compositions like “Starry Night”. The low horizon line and the tall darkness comes across in an abstraction that is all night-like color and just a little of anything else down in the far left corner. All this is to say that the abstract painter, Mr. Still, was composing the painting – intentionally – just as an more representational painter might do. 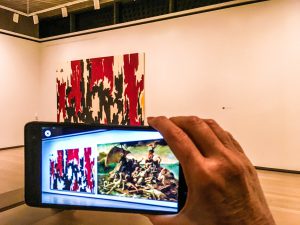 Viewers can certainly make up any story they want to go with either the VanGogh (although a daytime story would seem a little daft) or the Still, but if we acted enough people we’d get a general consensus, I think, that we feel small and amazed by both of them. And that’s because the composition goes to our primal, human feelings.

Last spring we saw a show at the same museum curated by the L.A. painter Mark Bradford called Shade. In that show was a large nearly black and white painting with lots of dark black marks – vertical lightening bolts painted and bunched on top of one another, seeming to be different (like snowflakes) and of different size. My sister, who would be the first person to say she knows nothing about painting, said that painting feels like a lot of people, maybe dead or spirit people, marking into the distance together. As she was telling me this in the museum, someone else came up and said they saw the same thing. Someone else felt it was about a tribe, or a grove of trees – some collective living. This all came from minute, just a few, standing in front of this piece.

A similar Still painting of few colors beyond black and white is in this show, and virtually paired with it is The Raft of the Medusa – the Géricault painting from the early 1800s. Shall we discuss commonalities?  Add your commen