TAKING THE FUN OUT OF FUNDAMENT

Denver – July 18, 2015. Beautiful images on a big screen in a palatial opera hall could have been a wonderful way to spend a Saturday night. For six hours last night I had the opportunity to see some, but watching the film River of Fundament became more like a nightmare of a very long art history class, with the added horror of an incredibly intrusive sound track that obscured the lecture and caused dream-like anxiety about understanding.

Amazing images, many would have been better still – as in a book – but some benefited from multiple frames. For example, a shot of an anus, from which is pulled a very thin plastic tarp that expands to cover some pile of crap that’s been carted around the screen. I recognized the feel of the material, very thin, like what we used to call ‘space blanket’ but with a texture spawn of something organic – some of the newer recycled plastic are this subtle – and I had minutes to appreciate it’s materiality. Another shot, staged at an industrial site in Detroit, orchestrated a nighttime iron pour familiar to all art students who have ever cast sculpture in a foundry. Molten iron was sent through refractory channels making rivers of hot red metal that cascaded for what seemed like stories from an industrial ruin. I’ve always found this process beautiful, but this film repeatedly cartooned work to look as ridiculous as Esther Williams movies made synchronized swimming. Can you imagine the directions?

Do this and make it look like real work.

More ordinary, yet very beautiful to see at the lethargic, and unfortunately constant, pace that made the four hour film feel like six or seven hours, is a repeated cut to a highly curated group of people dressed in black and white sitting on a gray barge under a blue gray sky. Behind them passes a large brown container. The movement introduced the new color, and it was a pleasurable relief. And then click, onto another slide. And, like the worst of nightmares, we’d already seen that slide before. I walked outside during the first intermission and a woman passed by in a bright blue dress. I felt almost giddy at seeing real people, real colors.

This film will be perfect in an art museum displayed so you can walk by and see a cool image and walk on. You know the set up I’m suggesting. The mostly walled off gallery that gives off flashes of color from the changing of video frames. The flashes invites you in, headphone hang on the wall to keep the sound out of the contemplative museum space.

With few exceptions, the images show don’t need motion or the length of time the camera rested on or returned to them – gratuitous landscapes at beginning and end. I just wanted to grab the professor’s clicker and get on with it. ‘Unnecessarily long,’ said one of my fellow viewers said trying not to be too critical. We are artists watching a film by Matthew Barney an artist with lots of name recognition among contemporary visual artists. Saying R of F was a shit film and a waste of time is like criticizing Marcel Duchamp’s Fountain. There was a feeling of art being spewed from on high, which is why the art lecture metaphor was the first one to come to me, but when I think of the music, I recall feeling like the delinquent in Clockwork Orange being treated for his anti-social behavior with my eyes and ears forcibly kept open for hours. The bass sound was so low that you couldn’t close your ears to it, it would have disturbed the deaf. 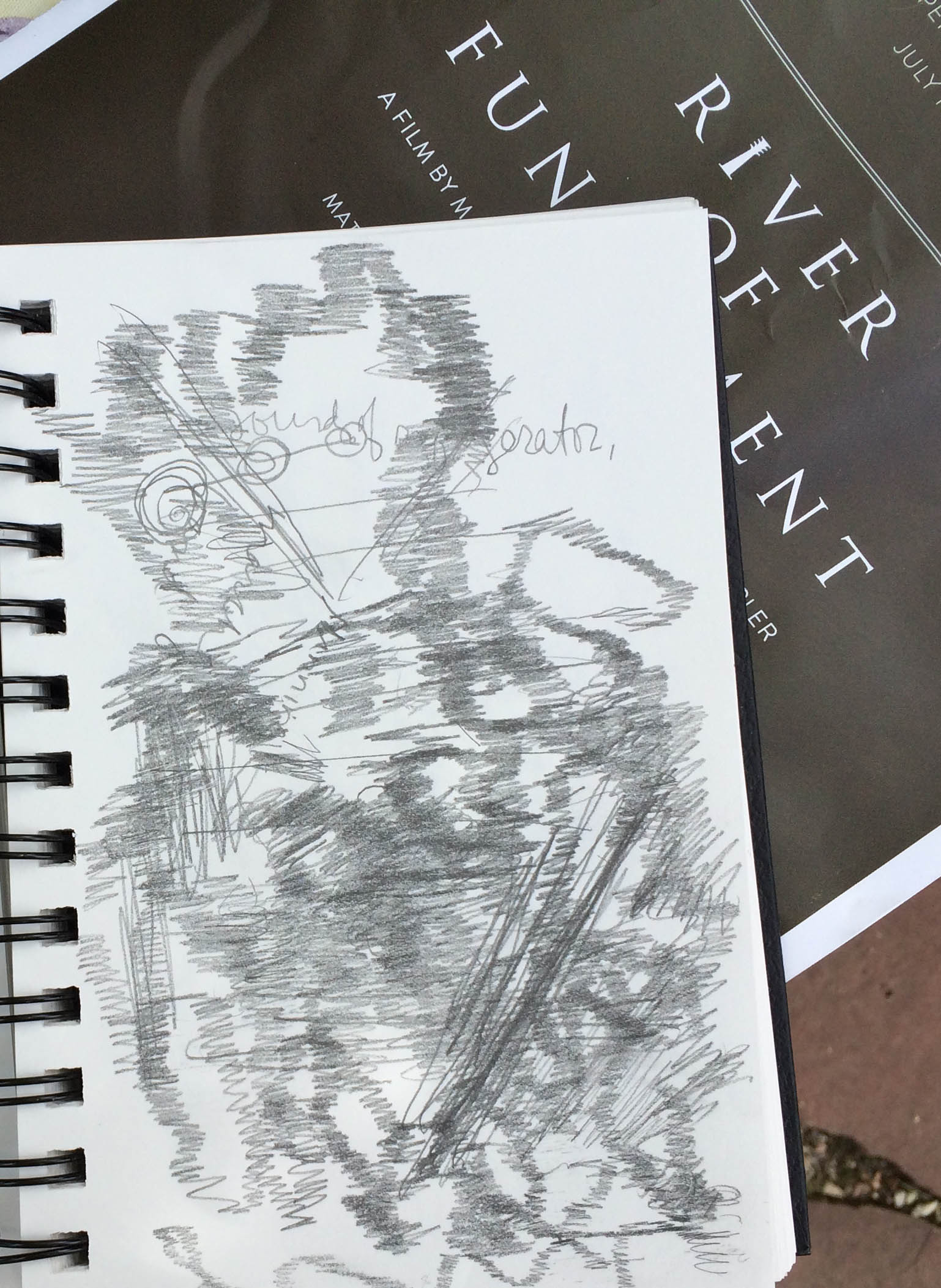 Some moments of very innovative sound – a refrigerator running – beautifully integrated with speech turned into song or instrument – made music that was more than the sum of its parts.  Rich transitions were more interesting than those of the visuals. The lyrics were ridiculous, and sometimes the sound was just annoying but, conveniently, it too was unnecessarily long.

And then sometimes music or screech ran over the words being spoken. Apparently they were insignificant anyway – including one speech where someone is reading Norman Mailer’s written work – the novel cited as the partial subject of this film – Ancient Evenings. I started to read this years ago. Mailer’s way of elevating ‘shit talk’ to grandiloquence has always rubbed me the wrong way. It has the same egotistical self-importance of kids talking about ‘poop’ and thinking they were really funny because they could talk like that.

And shit is what this movie is talking about. I’d like to be generous and find some myth or meaning beyond adolescent bullshit like the texts handed out before the film portent. Apparently the film is based on an Egyptian myth, one that isn’t consistent in its ancient sources, and so we don’t start with a common understanding – all we have is what we see on the screen. And I didn’t get most of what that pre-text said I should find.  After five hours: the dead have to move slowly, wearing general angst like a uniform. They climb out of muck on staircases without railings, speak infrequently and in artificial syntax, wear weird white blobs like birthmarks  and are adorned by mud attractively drying on their clothes and limbs. Women wear less clothing when dead then men. We know these uniformed characters are dead because one actor shouts you’re dead Norman, and so we are clued in that this is about Norman Mailer – either you read the text at the beginning or someone tells you. We get the name dropping. It moves on to bookshelves, where more names are dropped, like the gratuitous cameos of literati or Mailerites. When you’re dead, your voice in your work will be soundtracked over and obviously there’s nothing you can do about it. You will be replaced with creepy ghosts of yourself – an actor on screen had to call each one Norman at least once so we were clued in.  The reincarnation, the impregnation, the sodomy was performed like an info-graphic. The action was so wooden that it was hard to tell the dead from the resurrected. Hard to find the point. Bookshelves are pretty, cars are pretty, the insides of cars are hard to shoot – lighting wasn’t so great – gold leaf looks good on screen, but shit in this narrative seems to be really important. It transcends generations. People come and go through it.

Thankfully, we are spared from obvious violence until the last act, and then it is cartoon-like and people seem to not know how to clean themselves – or that antibiotics exist – although rivers are flowing all around them. Children appear, from where is unknown. Male genitals are ornamental, and silly. Holes are for pushing or pulling things in and out of. This is apparently a 21st Century remake of the myth so the director has seen porn and appreciates the action. The ancestors have a lot of influence because most everyone else is just mopping around. The musicians seem to be the only actively alive people – but their music becomes banal because of its ubiquitous. The point? Everything is or will become shit, so who gives a shit.

When Norman Mailer wrote, and someone published, The Naked and the Dead, they had the sense to cut out the stuff that sounded like a third-grader talking about poop. Hours of that were unfortunately left in this film.