Four artists and months of work fill the third floor of the McNichols building in a show called Vis-à-vis. There is plenty of physical space between the works, and it is pleasantly filled with the conceit that two artists from Denver would swap studios with two artists from Mexico City.

The spirit of this exchange seems to be earnestly delivered on by the four artists.

Matt Scobey, from Denver, starts from a corner and fills the room with clay tiles that he didn’t intent to be structural impervious. He intended for people to walk on them and break them and that the rubble would be interesting.

The pattern on each tile is subtle and together they feel like a landscape – just 2 inches off the floor.

The material he used at SOMA in Mexico City couldn’t be found here, and it behaved differently than any clays he’d previous used. The finished piece shows this struggle with the material – varying between order and disrepair, although it didn’t end up as the artist first intended.

Instead of leaving their decay and disarray to chance he arranged them on an orange foundation and that color comes through in the rare areas where the tiles are missing. The arrangement is a precise design – as if the artist was trying to put together what he’d learned in the process of this exchange of place. And no, you can’t step on it.

But you can step on a small group of paintings that Melissa Furness laid on the floor, separate from a large pile of them that is the central work she brought to this space. The pile consists of hundreds of sketchy paintings all the same size. Each one, she said, were each painted within 18 minutes. Preciousness is discarded.

Each painting has words in Spanish written on the edge of the canvas, and viewers diverted their gaze from the discarded ‘art’ and tried to read the words searching for meaning. I speak French, pretty well, and could get the gist of most of the Spanish, and then chatted with the artist about trying to communicate in a second language. My artist statement probably sound like a child wrote them, and I know I can’t talk about politics the way I’d like.

“I don’t speak Spanish,” Furness said. Painting the words was the most time consuming part of each painting, she added.

As flippant as this sounds, the finished work made me feel instinctively bad about the canvases – denigrated and not worked to perfection; made me look to the words for meaning, and left me feeling like a tourist not really getting the meaning. In other words, it worked.

Cristóbal Gracia worked with the Herbert Bayer sculpture at the Denver Design Center and with another, nearly identical Bayer sculpture that was placed in Mexico City, in 1968. His video of a french fry eating contest at the base of the sculpture as well as footage from Mexico exposed the life cycle of public art including cracks in the glory. 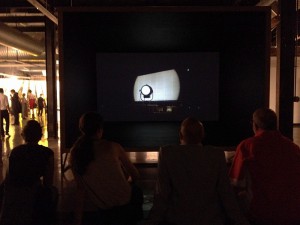 Daniel Monroy Cuevas’ work is exclusively video and his film of an abandoned drive-in movie theater in Center, Colorado is lush, focused and incredibly well housed in this space.  Beautifully, and simply constructed, this screen is contained within a structure that isolates it – like a movie theater – but the viewer is free to move in close or be exposed to the entire space while watching it.