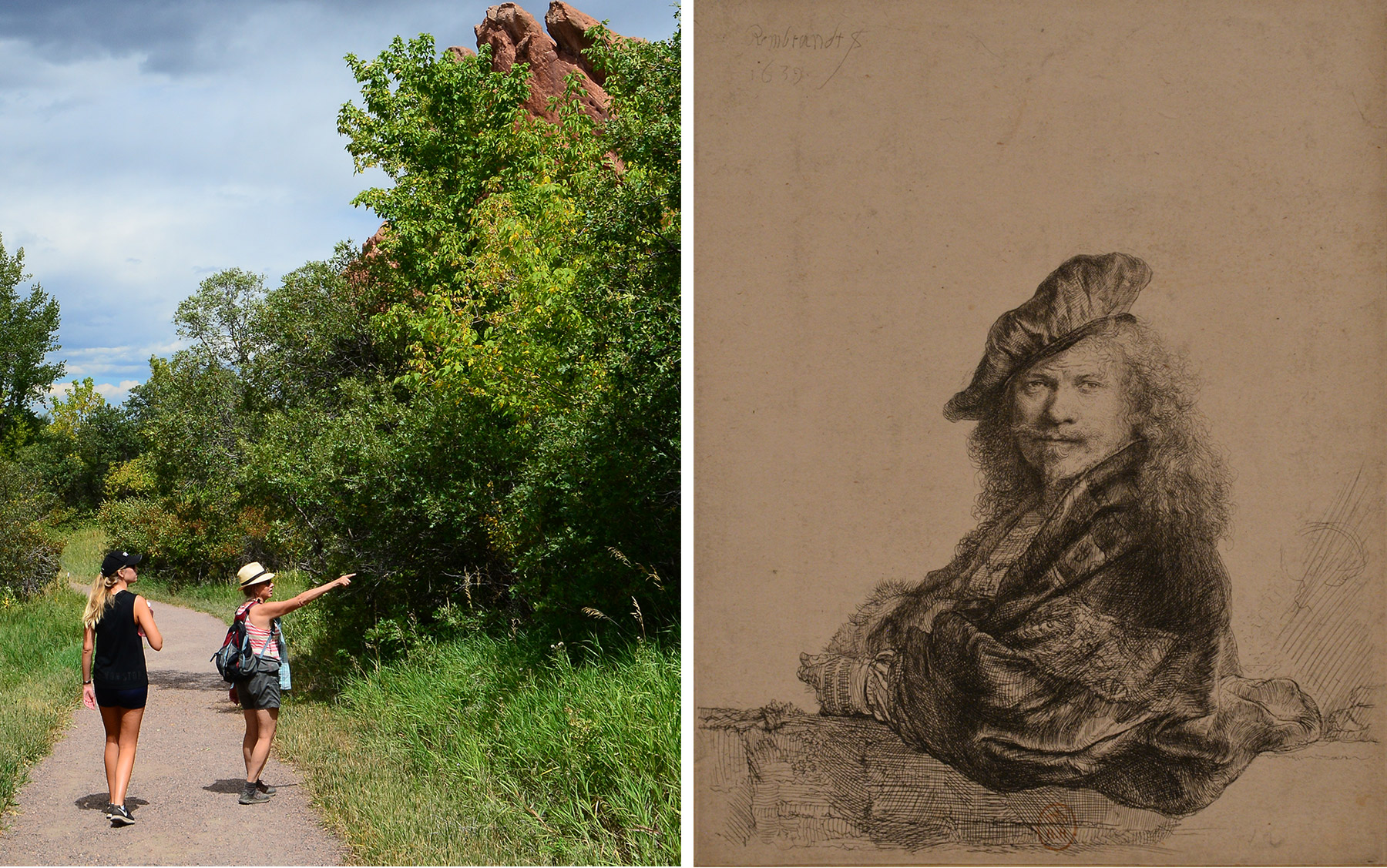 Ballcap and fedora from Bally of Hollywood 2018, and Rembrandt’s cap

There are more than 100 prints from 350 years ago from one of the most prosperous countries on earth – the Dutch Republic – and by their guy there, Rembrandt Harmenszoon van Rijn, the painter of the Rhine (Rijn) not of Leiden where he was from. He did use van Leiden for a while, but it wasn’t the surname he wanted because there was another artist of the time from Leiden.

Rembrandt as a printmaker.

This show is terrific, even for a viewer like me how wants art to be edgy, because the curators and their sources (the Biblioteque Nationale de France, particularly) know show much about Rembrandt and they have put together the best versions of images that are laying around in the world in multiple states and conditins. And they show us different ‘states’ of the image side by side.  The artist would work on an image for a while, print it (create a state) to see how the work was going, and then work on it some more.  For this and the intensity of marks made on a metal plate (yes, there is one in the show) this exhibition is a joy and privilege to see. And Denver is the only stop on its journey.

But why is Rembrandt is interesting today? And in particular why are his etching worth viewing.  This technique was pretty new when Rembrandt was doing it.  Why would he buy all the equipment and learn the techniques to make prints? I always ask contemporary printmakers, whether they are doing collographs, silk screens, lithographs, engravings or etchings, why? And they all talk technique. The tell me that somehow the indirectness of marking something, processing it so that it becomes something else and then smearing it with ink increases the richness of the final product: the ink on paper.  This is ultimately why it is a simple pleasure to look at these etchings by Rembrandt assembled together in the contemplative space of the Denver Art Museum’s gallery. But there is another reason artists make prints.

You can make multiples (to sell) of each one of your drawings.

The museum suggests that it’s great to see what Dutch daily life looked like in the 1660s, and I think the contrast of then and now is interesting.  In looking at the show, Rembrandt, who made all these prints based on very tedious mark making, is telling us that he had a very busy day, everyday, in order to live a descent life in that society. When he died 349 years ago today, Oct 4th, he was buried in the generic church graveyard and according to Wikipedia his remains were dug up 20 years later to make room for the next gen of paupers, people of his ilk. This is Rembrandt, folks, possibly the greatest painter of all times – buried a pauper – and it just makes me think that life is so much better now. Of his four children only one lived more than months. And that surviving kid, Titus, died before his father did.

Adam Smith who wrote the Wealth of Nations in 1776 thought the guilds should be abolished because each one was a monopoly granted by the state. Rembrandt, like you or me, would have needed to belong to the guild. If you didn’t, you could not offer your labor for trade.  In 1660, the painters guild through him out for being in debt. He could no longer offer his labor for trade.

This is similar to working in film in Hollywood today. You must belong to the union to offer your labor for trade of money on any decent show. If not in the union, you don’t get hired. And hopefully, the unions provide health insurance and workplace safety as well as a good and better than fair trade of your labor for dollars. Well, I said, hopefully. Think Elizabeth Anderson, U of Michigan professor. Anderson suggests that today we can do better than 1660. She makes a great claim for better minimum level of dignity for labor in her 2018 book, Private Government. Yes,  in 2018 we know conditions aren’t ideal for workers.

But it is much better than it was 350 year ago. Beggars are less emaciated today. As we can see in Rembrandt’s etching, whole families were on the street begging. No social safety net. No food stamps.

And more contrasts are apparent. Religion isn’t filling every canvas, today. Artists can make art about anything.  Torture – way down. Hats, not so expensive. If you’re a news watcher/reader, 2018 doesn’t feel like it’s so much better than 1660, but I’ve spend a year plowing slowly through a book called The Better Angels of our Nature: Why Violence Has Declined by Steven Pinker, and I am convinced by the author’s many charts compiled from a variety of sources that today really is much, much better than 350 years ago. 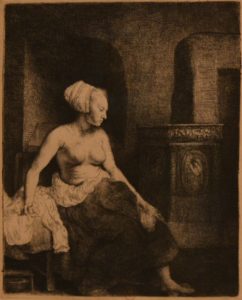 Just take pornography.  In Rembrandt’s day, this image was probably the best you could do for a cheap way to see a partially naked woman. I’m surprised to hear myself say this, but we are actually becoming less Puritanical, not just worldwide but in the United States as well.  We are actually talking about how it is kind of gross that Rembrandt and many artists after him would sketch up naked women, and that the drawing boards were hardly ever swapped for the model’s chair. Here, you sit for me now. We are only now finding it just as natural to have a woman doing the drawing.

Rembrandt lost his first wife to disease. That’s a lot less likely today, percentage-wise. His wife’s trust was paying for their surviving child, so he couldn’t remarry without loosing that support.  His second (common-law) wife gets slapped with a fine for being a whore to him.  Nice. And this was the 99% talking at that time.  Today, we have to search hard in a tiny minority of thinkers to find such reactionary, misogynistic, prudish thinking.

Speaking of reactionaries, I’ve been having a hard time writing about Rembrandt. I’ve been thinking too much about Kavanaugh.

Thinking and writing about Rembrandt seemed a little frivolous to me when our country seems so poorly lead by the executive and legislative (and possibly soon the judicial) branches of government. But then thinking about Rembrandt gave me an idea.  I started wondering if he is the LeRoy Neiman of the Renaissance. If you don’t know or don’t remember Neiman, he made slapdash paintings that he was selling like hotcakes. I remember seeing him painting at the Olympics. He was an excellent marketer, and I’m pretty sure that didn’t make him a better painter. He had the skills to represent space and people in a style that was his own, but all his effort just didn’t seem any good to me, and many people who are serious about visual art. I want more from art than just a nice painting for over the couch.

Kavanaugh is the LeRoy Neiman of Supreme Court nominees. He’s really good at marketing himself, and he’ll paint Olympics if you want him to. He’s been doing his schtick for a while and has got the skills down, but the work he’s producing seems like it’s been done before. Do we still defend torture? He does. And doesn’t he seem to be making decisions – like Nixon was wronged — because the folks with money and power will buy it? He’s not taking on tough subjects like climate change, or money in politics, because big business interests don’t want to think about serious things. They want us distracted by his temper tantrums and TV. There are some people who don’t want to be distracted by circuses. We enjoy thinking deeply, and who get real pleasure from intellectual and aesthetically challenging art. Kavanaugh is the bumpkin who asks, ‘Who wants to see art that makes you think?’. We, who enjoy unsafe art, are lucky to be living in 2018 because the world is better. Art can be better.

I’m just not sure that Rembrandt, as skillful as he was, had in the 1600s the personal liberty to be an artist who can make us think.

And unfortunately, I’m not sure that in today’s liberty-filled America, even with its vast majority of citizens who believe in progress, we have the political rationality to get the best judgement onto the highest court of the land.