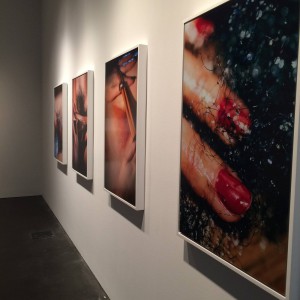 To see decades of an artist’s work – the Marilyn Minter show at the Museum of Contemporary Art Denver – it’s hard not to feel like you’ve been friends your whole life. You just forgot to call.

For me, Ms. Minter is the older girl that lived next door – the one who let me hang out and watch her get older before it happened to me.  It became obvious that growing up made you disappear into the world like she did.

Disappear for all long time, until she reappeared to me in this retrospective. 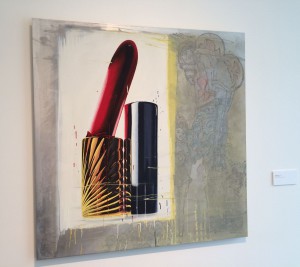 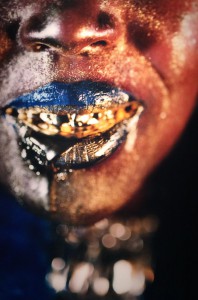 For several decades Minter’s been making paintings and photographs that initially appear to be lush landscapes.  Given some time, I’m surprised to discover they are closely observed details of our bodies or our food – surprised pleasantly is not with a pinch of hebe-geebees. 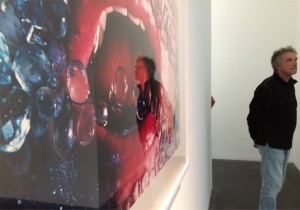 The later and larger images are blurry on the surface – either a veil or lack of focus hides the figure or the face so that we can’t quite see everything. It implies a tease, the tease of advertising, or super bowl music performances. But these images are honest and direct and the tease is what looks exposed instead of the figure. I’m not saying any of these works are subtle; I’m saying they work. 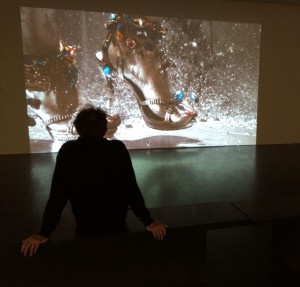 The lower level of the MCA is perfect for showing video. All by itself there, you’ll find Minter’s Smash – a video focused on a dancer’s feet. They are ornate, bejeweled and lathered in silver body paint – and they smash what seems to be a clear sheet of crystallized sugar. The smash is dynamic but non-threatening. No blood mares the silver skin. Water invigorates the entire scene – a scene that attracts like a magnet, like food photography, while also disgusts. The water isn’t clear. The effect feels veiled – like poetry – exotic and ordinary at the same time.

If I’ve run across Minter’s work in the past, I’ve not taken any more notice than I had of the few minutes of reminiscent chat with my old neighbor girl. And I’ve had opportunity: Minter’s solo shows at major institutions starting about 10 years ago.

Sometimes seeing one piece doesn’t really get across the power of a life of artwork. With one piece, I might not have had the reaction of renewed acquaintance.  Had I been there at the San Francisco Museum of Modern Art in 2005, I may have missed the connection, particularly if the curator didn’t include the earliest photos.

Minter’s earliest photographs are of her mother taken in the late 50s, early 60s. 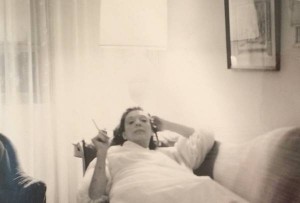 The time has a look that we recognize (in photos from the time, or TV reenactments) and Minter’s mother is attempting glamour, but not achieving it.  Her mother looks old.

I was born late in my mother’s bearing years and by the time I was old enough to take a decent photograph, my mother was close to 60. I remember her trying to be attractive by standards that were rigged against someone her age. Like my first photos of my mother, Minter’s are sad.

Those, instantly, told me Minter was describing my mother, my adored, older, neighbor girl, my trying to reconcile how women disappear into objects visualized in popular images. These first images in the exhibition stayed with me throughout it – they remind me that I didn’t want to play this game. And still don’t.