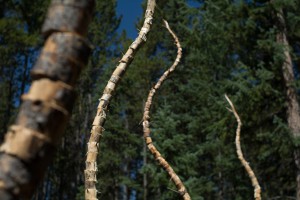 Is does not make ought – that’s the gist of Hume’s Guillotine, a philosophical law that prefers moral law over natural law. Environmental issues are enormously complex in the Western U.S.  and today, industry and tourism both want of piece of the landscape. Often things are left as they are, and as they have been done. It can be hard to do what’s simply right for the land, and for that reason Bremner and Talty made this work they decided to call Hume’s Guillotine. Watch Making Sculpture:Humes-Guillotine.

We made this piece to change our way of looking at lodgepole pines, which usually grow in a straight line, straight up. Changing the shape of the trees, transforms our understanding. Now, they’re in a state of new growth, like a sapling or seedings – on a big scale – and we hope our idea of the landscape and our environment is transformed. 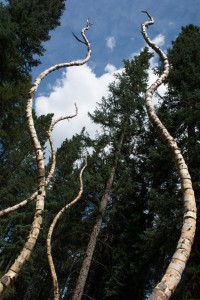 This ephemeral sculpture was made on site from dead and down lodgepole pines. These trees litter the forests floor today, having come quickly to the end of their short life cycles. Lodgepoles took over like weeds when native spruce and fir were cut or cleared during the Colorado mining boom, or killed by man-made and natural fires. They are still the predominant tree in Summit County’s forest, although vulnerable to the pine beetle.

This temporary piece was our action – to make a visual metaphor of doing – against intellectual laziness. It’s intentionally dramatic and pushes for further thinking on what we ought to do.

Hume’s Guillotine is installed on town of Breckenridge open space, on the Moonstone Trail, between Carter Park and Moonstone Road. It’s a steep 10-minute walk from the park, or a very short few steps from Moonstone Road, just 100 yards from its intersection with Boreas Pass Road. Moonstone Road is a short, paved and famously steep  and has been an exciting part of the route of the Colorado Pro Cycling Challenge. 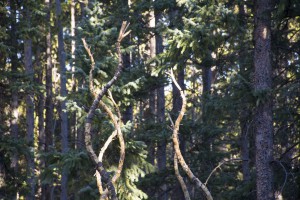 This is my piece, so it’s a little bit incestuous for me to write about this in a critical way. But like most contemporary art, it benefits from discussion, so I’ll go on.

Hume’s Guillotine – a vivid name for the philosophical principle that “is” doesn’t make “ought” comes for me into the 21st century, as a call to change the world for the best.  Hume’s law can be interpreted as “just because it is, doesn’t morally or physically mean it should be that way.” 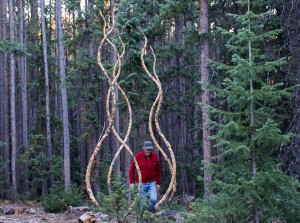 I’ve been thinking of how it acts as a guillotine – cutting the head off its victims – and went to find and read Hume’s dialogues. He uses this theory in these Socratic dialogues, particularly the ones debating the creationism theories of his time. He was the first to say that you can’t infer a designer just because the natural world seems so well designed. The poet, P.B. Shelley continued this thinking, saying in one of his dialogue-style pieces, ‘the design must be proved before a designer can be inferred.’  Hume’s logic brilliantly allows on to cut off someone’s line of reasoning when they say ‘well, that’s the way it is, so it must be right.’ If you are discussing issues with people who agree to think rationally, this is a guillotine.

Of course, it doesn’t stop the irrational.

The environmental sculpture Hume’s Guillotine,  or the philosophical idea behind it, should launch thought to a better solution, and certainly make way for discussion of ideas.  When making this piece, we had no idea that it would cast shadows that were incredibly vivid. We were surprised that what is debris in this open space, the stuff we have to jump over when hiking, could become forms that have a new life. That these forms would seem so botanically appropriate and suggest seedlings or growing, living plants.