Who is behind street art – at the MCA – Denver –

It’s easy to see the new shows at the Museum of Contemporary Art Denver – you don’t even have to be in Denver. Look around and you’ll see people passionately saying, ‘Hey, Look at Me.’  Basquiat before Basquiat, Wall Writers and Ryan McGinley’s The Kids Were Alright – come together in one building to make a multi-level statement about self expression – a kind of curatorial act of self-expression using history to show the success of human expression.

I said it’s easy to see this curatorial conceptual art from about anywhere – and I’ll give some simple instructions how to do so. While you’re waiting, get some practice in making conceptual art by reading one of Yoko Ono’s instructions from the book Grapefruit.

Instructions for Seeing this Show Anywhere

So go out at night and follow a bunch of kids with spray paint in their backpacks. You may have to follow someone from the hardware store, who showed ID to buy paint and watch for the handoff from this provider to the kids.  Watch as the kids spray paint their tags on various surfaces. Record a video with a wide open lens, so you can later watch a drawing happen in real time. (Or you can watch our video of Basquiat.)

You’ll also want to take pictures of the guys painting in awkward positions. Capture one crouched up high somewhere, or doing something that seems risky. You should be able to make a few beautiful images just by placing the skyline in the distance – on a diagonal or with the horizon inverted.  Remove the normal street scene clutter from the photographs by turning it into hanging clouds lighter than gravity. Or let a streetlight cast a beneficent halo on something illegal.

Now, print your images really large. Hang then on a wall you see often, so that, in your spare time, you can appreciate the grain (if you’re using film for the nostalgia of it) or its digital replacement, or to notice how well soft focus mitigates the pixilation, or just to remember someone’s goofy smile.  Choose the most titillating and beautiful and bring them into a clean modern museum and fill its big white walls.

All the steps up to this point can be prepared in advance (dredged up from your youth) or simply imagined.

You can append this story with the city workers who must paint over the graffiti.  To be snarky critical, the images that are getting painted over probably don’t deserve to remain and, maybe, neither do your cool photos of them and their makers. Is any of this cutting edge art? Probably not, but there are more destructive activities than self-expression. And memories of our own ‘Hey, look at me’ moments are a good part of what we think makes us human, and individuals.

For taggers, there are memories that don’t get painted over – some include detention facilities. One of my youthful acts of self expression haunts me every time I go beneath the underpass on 38th near Brighton Boulevard. It’s a special place. One where I crashed my brother’s truck, late, late at night, fucked up with friends, all of us singing something very stupid and dressed like free-range sluts.

If you, too, can smell the leaded gas, you may remember the graffiti under the bridge.

If not, Wall Writers, the exhibition on the  lower level of the MCA, will give you that whiff of nostalgia for a time back when any kid could buy a cheap can of paint.

According to the curator of Wall Writers, street art was invented in 1967 in Philadelphia then spread to New York. The curator, Roger Gastman, who was one of the producers for the film Exit Through the Gift Shop, also made a documentary and a book – titled Wall Writers – illustrating many of the first tags, some of which are recreated on the museum walls in Denver. 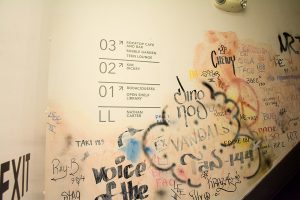 If you can’t make it to the show, or find the documentary, you can probably still find some graffiti in your town, or in your memory. My brother (the one who was very mad at me about the truck) had a tag. I don’t know if he painted it anywhere he shouldn’t have – except on the tool shed in our garage. He called it by the same name that everyone called him – his nickname – Tollhouse – and it was a kind of dopey eye – eye on his stuff in that toolshed. My parents never bothered to sand the black paint off the plywood door, and it remained his hello and goodbye to me whether driving to Babes in Toyland or off to college.  He drew the same mark on schoolbooks, on furniture he built for his room. He even talked about recreating it somehow in the upholstery of one of his car restorations. I was a very little kid then, but am sure his mark was invented around 1961. He graduated from high school the next year. And before my beatniky brother, there was ‘Kilroy Was Here’ the mark of the American soldier in WWII. 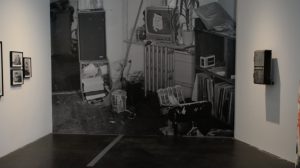 I’ve tried to offer a proxy for everything you might be missing if you can’t get to Denver for these three shows. You’ve imagined Ryan McGinley’s big pics of gay, 90s graffiti writers in New York. You’ve remembered historic street art in Wall Writers, but what about Basquiat?

A substitute for Basquiat’s early work is easy to find, but the exact stuff is in the first floor galleries of the MCA. Memorabilia from Jean Michel Basquiat’s very early art practice was saved by one of his first lovers and roommates. And this saved collection includes many notebook sheets with drawings and poems, early video and stuff from home: make-shift furniture and found-stuff acting as decoration.  This space is where the curator got really expressive. The exact rectangular dimensions of his room are drawn on the gallery floor.

In order to see this in your town, make sure that while out with your new graffiti-making friends you ask one or two of them to show you their poetry. If there isn’t time to do this on the street, you can volunteer at an after-school program for young adults or visit a poetry slam.  There could be little gems anywhere.

If you don’t have any memories of squalid living conditions, well, sorry for you.  Here’s a simple way to create one: go on a college tour with someone thinking of going to art school, and make sure to visit the dorms. This will help you get a good sense of Basquiat’s.  And it’s nice to think that he had a good girlfriend who kept all his stuff and didn’t toss it out when they broke up, that he wasn’t always living under box like the movie implied, that he was living like any other art student.

Lines, bars of a psychological prison … are our chains … our heredity, our education, our framework, our vices, our aspirations … Color on the other hand is free, it is instantly dissolved in space – Yves Klein.

There is one example of a recognizable Basquiat painting in this show and there are a lot of lines in it. This example is here to remind us that this artist here is going away from the all-blue canvas of Kleon or other minimalists like him.  Basquiat is about self-expression. His images are assembled with a freedom that Klein had no idea was possible with recognizable imagery.  I want to see more, but you nor I will see it here.

There are words worth reading that Basquiat wrote, but you won’t miss those if you don’t come to see the show – his notebooks have been published. What you might miss, is the poetry of many others, maybe even your friends. To take this opportunity may never have crossed your mind.

A few last steps and a quick video walk through

To be clear, you might have to go one more step to get the full effect of Ryan McGinley’s work on the top floor of the museum. You mentally blew up photos from your graffiti capers, but you might want to spend the night with some gay people and take their photos – that is, if you want the full effect of the early work of McGinley. Alternatively, this nicely installed show, called The Kids Were Alright, will remain up until August.

But we’re not done yet. The curator  did one more thing that’s very beautiful in situ. The outermost walls of the museum are glass and covered by translucent panels that filter natural light into the galleries. Attached on this interior perimeter are several rows of Polaroids taking up the full swath of normal eye level. All from an SX70, they’re the same size and in regular rhythm like the cogs of a film roll and were all taken in the same location in front of an unimportant background. Each image is a spontaneous portrait of a guest to McGinley’s place, a journal of friends and acquaintances.

Technically, this is very nicely executed, but you can recreate it from the nostalgia box. Here’s how. Pick a date in the past and remember where you lived. Now start remembering everyone who came to visit. You can repeat people who came often. Memory has a nice way of placing those subjects in a non-distinct background. If you stop remembering around 1,500 – you’ll have matched the number in this part of the MCA’s show.  However, these images will be of your friends and acquaintances and far fewer will be needed to give you the perfect cocktail of ’empathy’, ‘self-importance’ and ‘nostalgia’ .