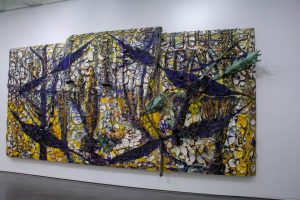 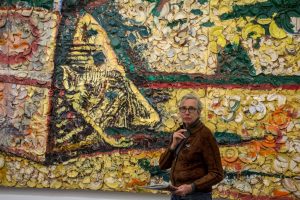 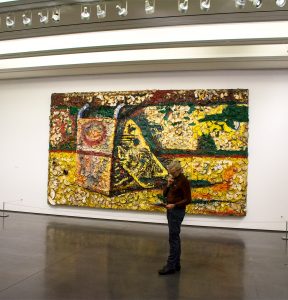 Five minutes into the first gallery of the show,  I started to think that I would have to have two of these paintings. One,  because you have to be really far away to understand and appreciate them. And two, because at that moment when you were appreciating the first painting, right behind you you’d want there to be another where you can pay attention to the detail, the texture of the plates. But, knowing that it was there,  I’d have to get away — they almost push you away.  Let’s just say it is not my path to get to  live with them. I cannot be intimate with the paintings any more than the hour or so I spend in the Aspen Art Museum.  I appreciate of the museum for showing them, and giving them the space they need so that I could imagine what it would be like to live with them.

The one I’m looking at here is called 86 – Spain – a huge painting that pushes you so far away — head and matador’s cape, feels all meaningful and symbolic. This, and several others of the plate paintings, have a big presence. Their physicality is not like a giant redwood but feels more like walking along a newly constructed highway.

The first painting I stood and felt is a salmon colored one and the shape that Schnable calls the closet shape is really obvious. Apparently, the shape was taken from a closet in a hotel room where he once stayed.  All are textured with dishes, a layer of time, a color applied on top. The next has things that bisect the closet shape, another bigger forms of color. After the earlier painting, the closet shape has a top on it so you can see it’s three-dimensional. It’s called Divan. A blue torso follows — you can make up shapes, see the ones he adds on purpose, but they all change when you get close. One has what I see as a little tear, and the head of Aristotle. When I first saw it, I said that piece needs the whole gallery, and then some. You can never get far enough away to NOT know the canvas is covered with dishes. 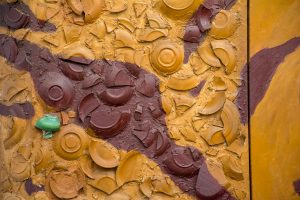 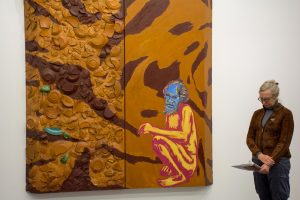 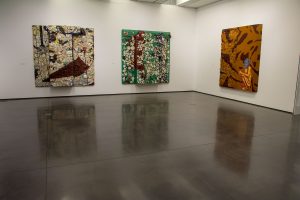 These are dishes, but visually just a texture. Why is it always dishes? They are similar and so ordinary like rows of used stuff at the Goodwill, and this reuse of similar objects make them seem regular, like a brush stroke. The pieces are ordered like a collection of similar objects as in a factory warehouse,  but somehow damaged and acted upon (like victims?).  I am reminded of the collection of ‘stores’ from an 1860s cargo boat that was pulled out of the Missouri River recently and on display inside a bird watching park in DeSoto Bend.

Many of these paintings are not about self expression, they are like the abstraction – the nothing depicted – of  Abstract Expressionism.  Looking at them, you can make up your own story from the little hint given in the title, like  Mud in Mudanza from 82, with its red dagger shape. This triptych is like a Clyfford Still – no representational shapes, the things that are not painted become a shape and form of their own, a negative, undressed-up element.  Still’s forms are like this and usually very textural, too. We saw Schnabel talk in Denver in the fall when he had just finished curating a show of Still’s paintings at the Clyfford Still Museum.

The Still show had a similar feeling to this one: you enter and go in the unexpected direction – passing the usual entrance and flow in both of these museums and start where you’d normally end.  This is a trick of showing, like pigLatin is a trick of a language and I think Schnabel has done this more than twice.  Another similarity between the two shows: they start with bravado – big paintings in your face. Schnabel chose the biggest Still I’ve ever seen as the first one you saw.  That’s a Schnabel curated exhibition – shouting at the postmodernist – “hey, we’re paintings here, and you don’t have to look, but we’re not moving out of the way. ”  Maybe we needed to do that in the 1980s.  And I like the sublime nothingness of pre-postmodern modern painting.

But, then the  figurative can seem hokey: Voltaire from 1981 with it’s big chunk of crockery.  And certainly the self portrait and, yeah, a nude. 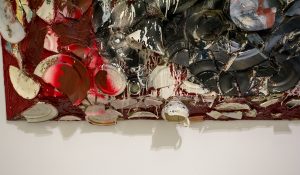 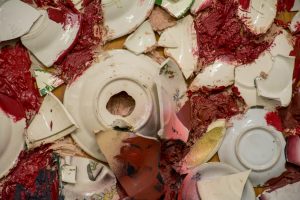 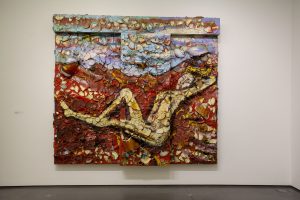 Red Hills of Fez or Portrait of Jacqueline makes you look because its a portrait.  Put people in and you can be a painter rock star. I’ve heard more than one artist say that.

I think the Art Aspen Museum’s show is simply called Schnabel’s Plate Paintings but Made You Look might have been better.