Jeffrey Gibson is a New York artist having his first major museum show in Denver that includes 57 objects made since 2011. These objects include paintings, sculpture and what I’d call tapestries. The show is curated by the Native Arts curator at the DAM, John Lukavic.  These facts make it a mix of chic Art World, Contemporary and Indigenous.

Chronology: facts I learned from meeting the artist, looking and listening.

Artist grew up the son of an Army Civil Engineer and grandchild of two American Indian grandmothers. Identifies as gay and a parent. Teaches at Bard College in (slightly) upstate New York.

Artist studied in Chicago then became an artist/art teacher. Crisis between those two roles prompted the artist to wash all his paintings. They became fabrics with organic naturalistic patterns and the texture of leather.

Artist assembled these leather-like fabric as collage paintings with obvious rivets that are unspectacular in photographs but incredibly alluring in real life. I imagine tribal camps. I wonder how a teepee, the covering, is sewn together and when and how it is decorated.  But more than anything I want to touch these pieces because they have such an unusual texture.  We’re in an art museum so I don’t. 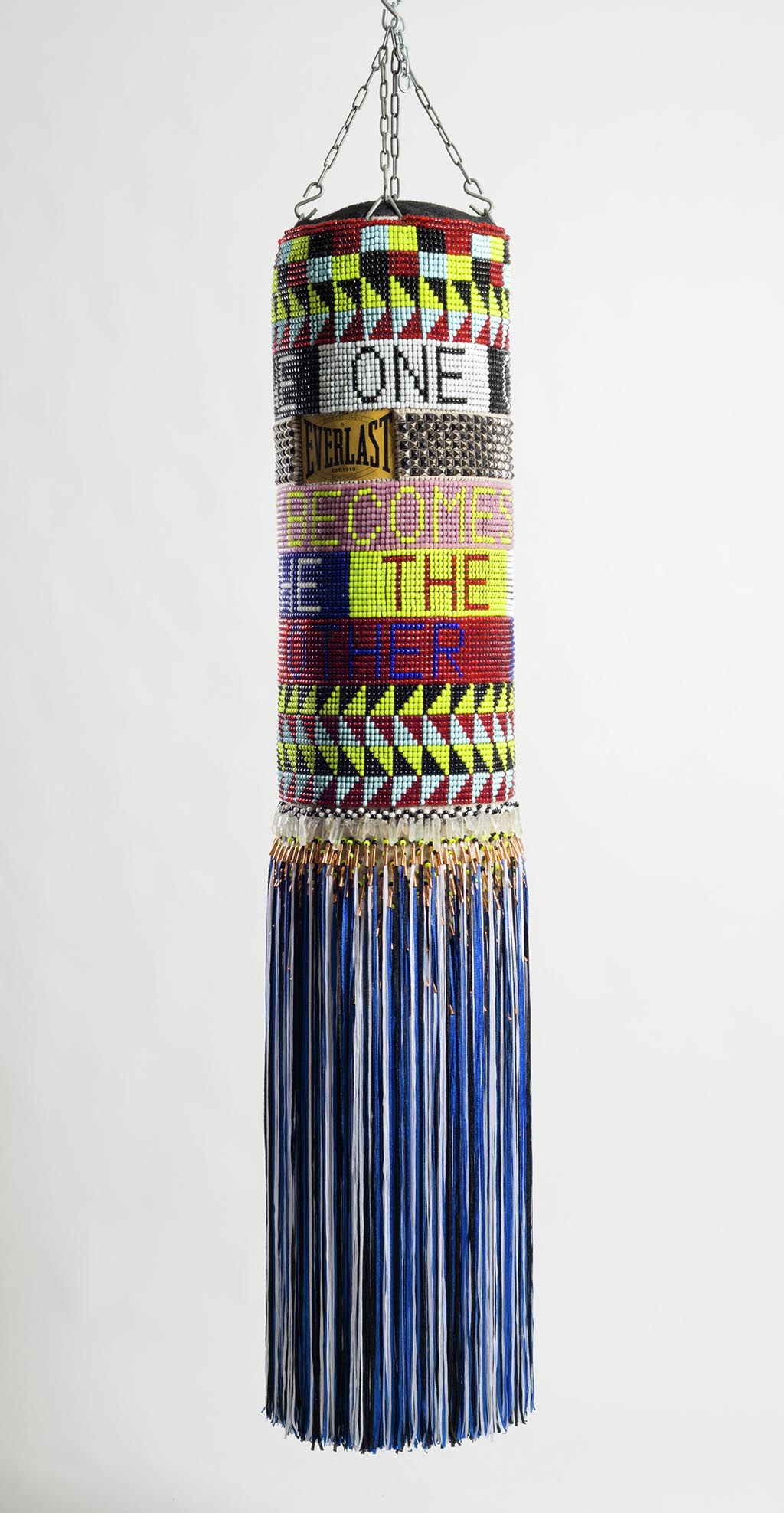 Artist realized that the imagery he was using for his work, what he was familiar with and had been looking at for a long time was American Indian art.  Stuff from his childhood in his mind’s eye, was most often crafts. He decided to skip the painting and make beaded tapestries using found language and supplies you can find at Indian craft stores.

He made crafty sculptures with punching bags. He was working out with a trainer at the time and had a relationship with a punch bag that he felt was masculine. He made it a feminine one by adding sheaths of beads or skirting of cords covered with jingles – the cone-shaped metal ornaments that make sounds when worn in ritual dances. They are plentiful in the artist’s work and I can imagine their sounds if moved. Other sculptures skip the bag, while being similarly feminine, maybe a little katchina-like.

One is these is called Like a Hammer, the title of this exhibition. Again, I imagine a sound, but we’re in a museum and we don’t touch the jingles. Nor is there any hammering. But the curator and artist did select a sound track, and there is some sound coming from a video made in the art museum in the Native American Indian archives. 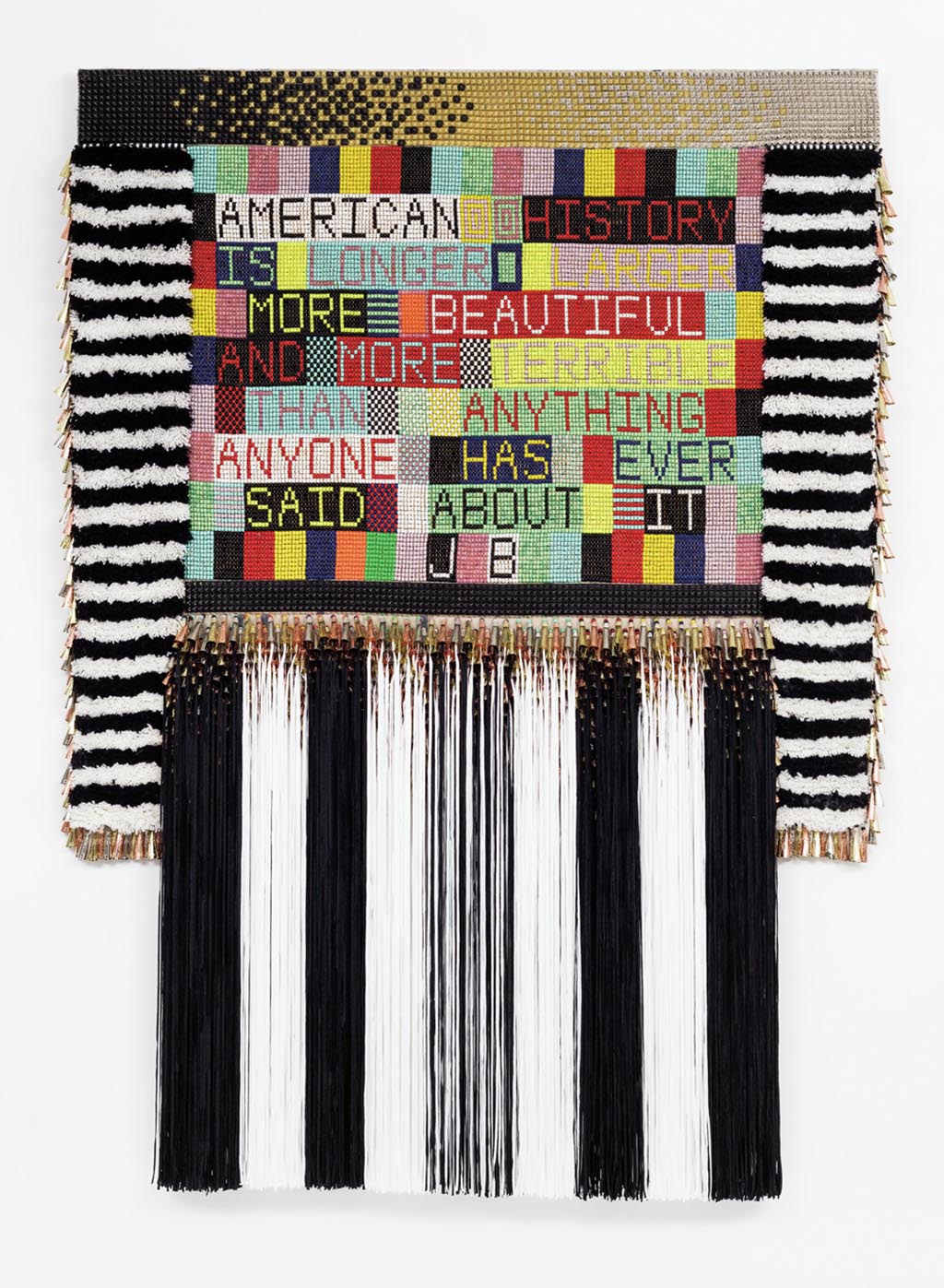 The artist or curator said the hammer is both used for building and for destroying. This second use is less imaginable for me. Taking a hammer to kill someone —
this is a myth of our time. A myth promoted by the NRA that hammers kill more people than rifles.

The double uses of the word myth is what seems to me to be the real power of the work this artist makes. One type of power comes from the traditions of telling stories. Stories that show people how to behave. As one scholar of American Indian philosophy, Jim Marunich said, this oral traditions gives instructions about how to live morally, about walking the right road. This is the older meaning of the word ‘myth’. Like Greek mythology, and like the parables Jesus told, myths can convey wisdom if interpreted correctly. The key is doing correctly, or as I saw on a t-shirt while running,
do
everything
with
love.

This wiggle-room in the interpreting leads to the second meaning of the word and puts myth in opposition to science and truth.

More people are killed with a hammer than with a rifle is an example the second meaning. ‘Myth’ meaning something people say and believe but isn’t true.

Blunt objects killed 435 people in 2014; firearms 8,124. Of those firearms, the FBI identified 245 as ‘rifles’. Bare hands, or beating someone to death, is a category of its own. Baseball bats were once used by the NRA as in ‘More people are killed with baseball bats than rifles,’ but they were probably proven false on this and changed it to hammers. Hammer does have the power to build as well as destroy, which is a nice touch for the NRAs propaganda and speaks to their crowd today more than the game of baseball. The myth comes from taking one of the smallest categories of firearms and comparing it to the whole category of blunt objects. The FBI neglects to break out the object specifically, but from the game of Clue we can guess the most common are: candlestick, lead pipe, wrench, dumbbell and trophy. If we add others we’ve heard about: bat, club, hammer, sledge, shovel, the likelihood that more people are killed with a hammer than a rifle is far fetched at best. But the myth sounds nice because rifles are a tool, too. They helped young Abe Lincoln feed his poor family. Not that rifles need more regulations, but maybe guns do.

Here’s a video showing several pieces in the show to give you a better idea of what’s to be seen.

An artist today making work that is the myth of our times is threading the ephemeral area between the two meanings of myth hoping to offer some wisdom. By pushing viewers and readers to hold up and examine how things are, what is being said as true and even what we see, can the artist help us interpret the story (with love) and extract some truth.

Gibson Like a Hammer –
Not a Les Paul –
The sound is implied.

Gibson is a painter
born from people
who were makers

Gibson Like a Hammer
Not like a Gibson Les Paul Solid Body
Electric Music Maker. Sound is
implied.

Like an Indian Dancer
Not like a blacksmith long gone. Stamp a Jingle
Organic Music maker. Beat is
rhythmic.

Like a tool or weapon
Work like a tradition. Humble
Craftspeople make beautiful things. Roofers clatter
Hammer on flesh no drumbeat
at all.

Wash away fine art.
Tapestries clothing, beads and slogans –
Myths for our times
tell us.