I grabbed for the pencil – the sign said “Do Not Touch!” — so I was not really going to touch. Was I?

When I got close, the pencil rose off the paper and scared me. You can watch my video and you’ll understand what is really happening, but it may take a few views. Or, you can imagine like I did that I had some power to control matter. The title of this exhibition of Peter Sarkisian videos is a nudge toward the clever: Mind Under Matter, but I tend to be rational so I guess I like that he preferences matter.

A friend of mine said yesterday, “It was meant to happen” about something that she wished hadn’t happened. To be deliberately caused by some unknown power, seems less likely that ‘matter happens’ and sometimes it is not what we expect or were hoping would happen. My friend’s huge argument with her husband wasn’t meant to happen. Both could have exercised more self control and developed better communication skills. Their feelings were a powder keg, I understand, but there is no world force that ‘meant’ the argument to occur. That it did, and they were able to discuss their feelings is a good, and to see it that way, is classic PR spin. Put the best face on what happened.

When art resonates with people, I’ve often heard it described in similar terms – like a world force created it. Art resonates because an artist gets an idea, does a lot of problem solving, hard thought and probably physical work. And like a good Little League coach I’m happy to give everyone a Participation Award. But sometimes, an artist needs to be singled out because their work is extremely entertaining or thought provoking. Peter Sarkisian’s work is both. 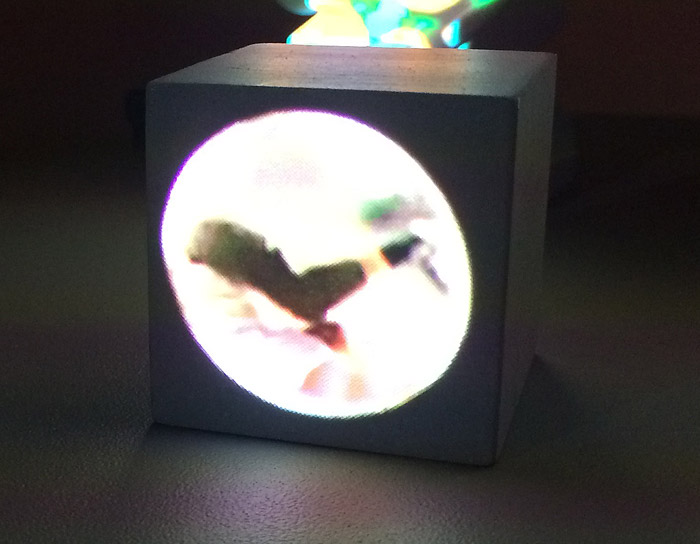 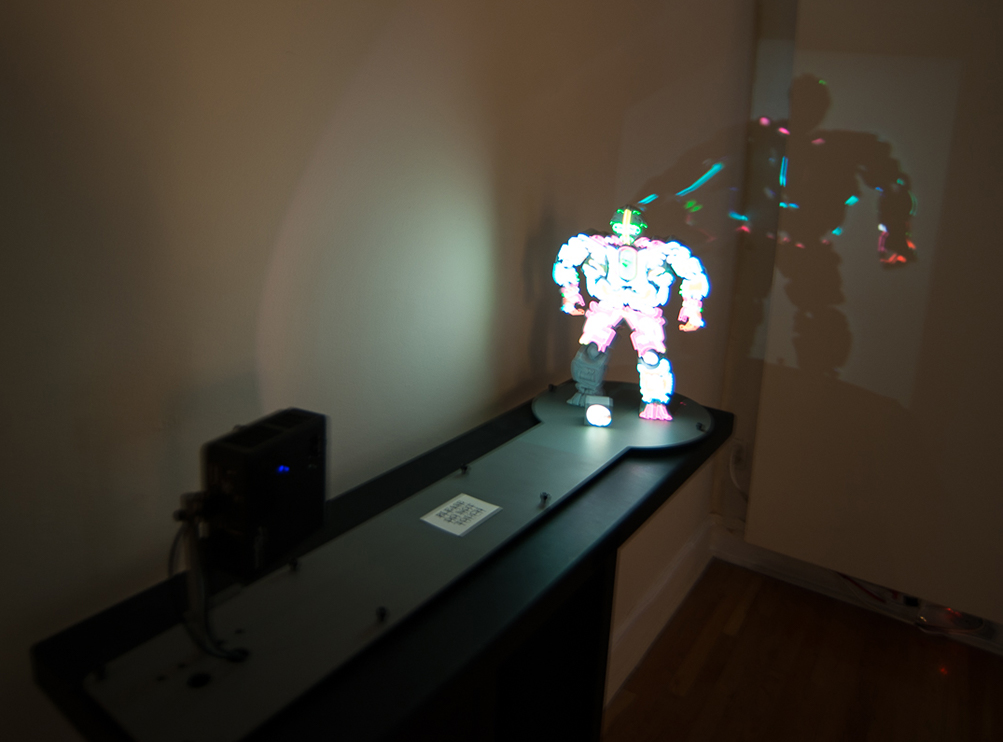 In his video, called  “Artificial Intelligence” – that glowed almost too brightly to look at, but made a great shadow on the wall – there is a small ball below one foot of the robot.  In that ball is video of a man rolling inside the ball.

Minutes before entering the Harwood to see four new shows including Sarkisian’s, I was talking to a guy in the lobby while he was decided if he was going to enter. He asked if this was an ‘abstract museum’. And it didn’t sound like he ‘believed in’ abstraction. All art, I’d argue is abstracted from the specific. People compliment a portrait by saying it’s more that just a representation of the person but brings the subject alive. That is a move to the abstract, toward what is in the mind and not the single representation of a view, which is how I see one photograph of a person. He said he likes the people who founded Taos, and further explained that he meant the Taos Art Colony founders and their paintings of the Indians they were to replace as the dominant culture in Taos.

To his dis of the abstract, the staff explained that the museum was run by the University (of New Mexico – that includes a great visual art department). She implied that it is meant to be educational. I chimed in with, ‘their shows change all the time, so plenty of new stuff to see’ — like these four very different shows. And then added that he might learn something new.

Not from Modern Art, he said, it’s meaningless. I explained that the Taos artists were often called Taos Modernists. Well, maybe at first, he said, meaning that now they were accepted, and that was what apparently he needed to be interested.

For me, the purpose of art is to be there before everyone accepts it. To find a canyon and discover what makes it beautiful. Not to stand at The Grand Canyon like the Griswald Family in Vacation, nod and go on. But not everyone has developed this sensibility, as the philosopher David Hume said in On Taste, and Michael Martin explains in this Philosophy Bites episode.

If you have the closed stance, it’s hard to receive anything. I found myself the other day, understanding that if you don’t allow your thinking to be disrupted you can’t learn new things. When I write this down it seems like such a small thought, but I realized that what I was asking myself was : what is it really to be open minded? And, why do I rarely see that in other people? It was one of those moments where I was really just trying to let ideas pour in and it felt great and far more expansive than what I wrote in my notes here at the Harwood:

if you don’t allow your thinking to be disrupted you can’t learn new things.

This thought came from thinking about Susan Sontag who liked to have her thinking disrupted. I thought I’d read a science fiction novel a friend recommended to me; I thought I would because I usually don’t. And I’m always thinking about politics and specifically how people are very fearful about changing the way we pay for healthcare. Why can’t we change it? Are people so weak they can’t commit to something as a community, like we did with the interstate highways? Or libraries, which America does better than many European countries? What makes someone open to new ideas? Is it just being curious? And the lack of openness, is it a culture that is not cultivating or rewarding curiosity? Is that why students are not motivated? Or is that social needs, and the conformity many societies expect, much more a part of schools than curiosity? I go into the Harwood because I want my conforming thinking to get disrupted, like Susan Sontag, who won’t read a book unless it disrupts her thinking. 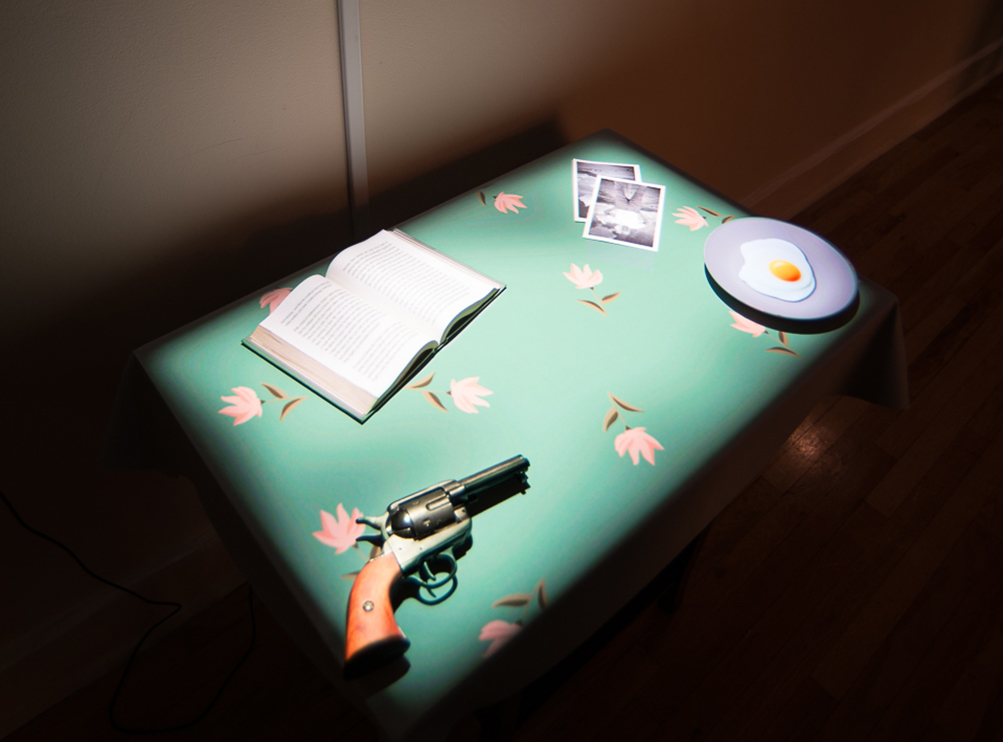 The most politically ambitious of Sarkisian’s video works is called When Artists Have Guns, in which everything is sucked up by the gun on the table: the guy in the photograph, the egg on the plate and the flowers on the tablecloth fabric. The gun sucks the life out of us. Let’s imagine Planned Parenthood lay on the table instead of the gun. No, it isn’t equally horrifying. There are issues in the country and some are more important than others. 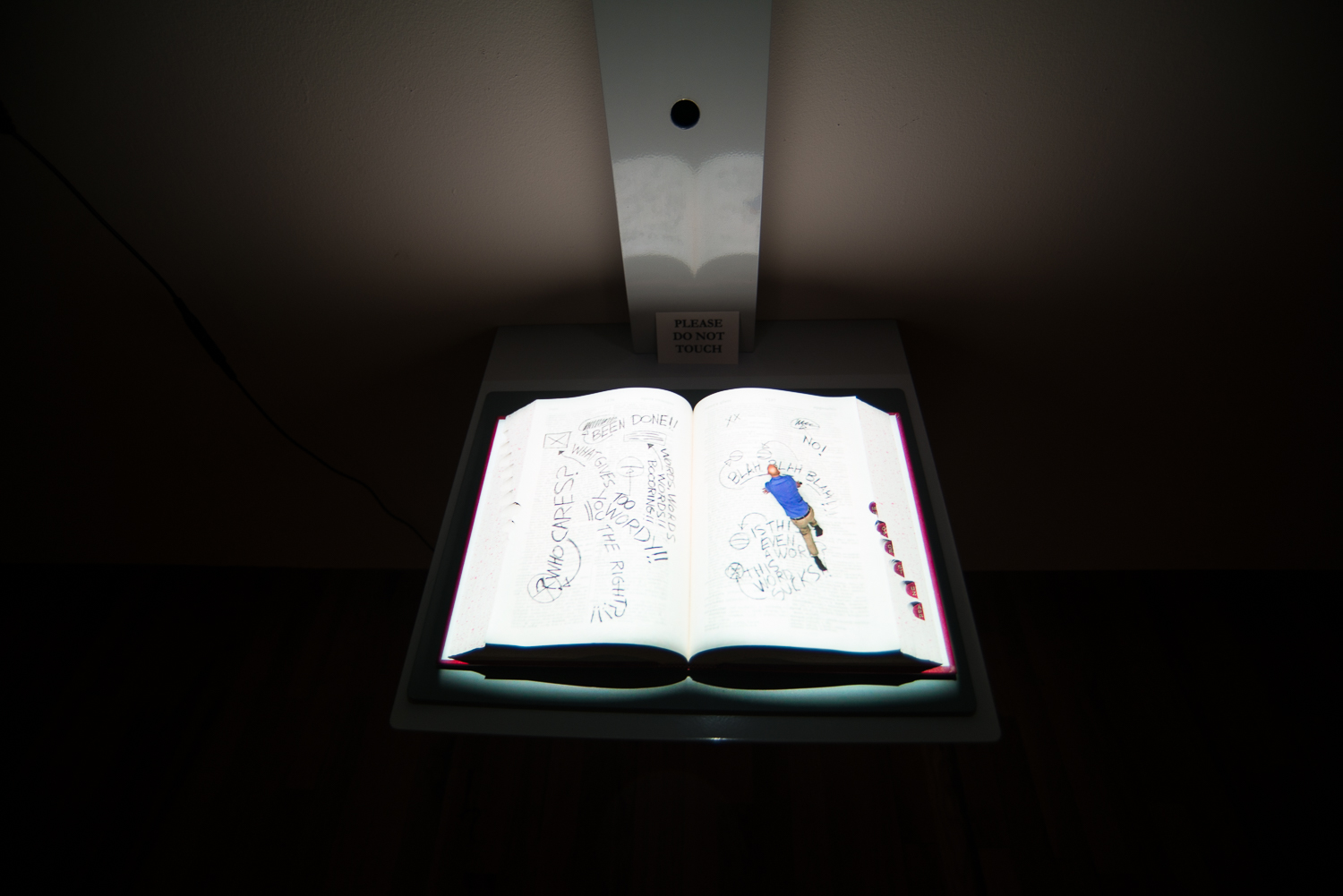 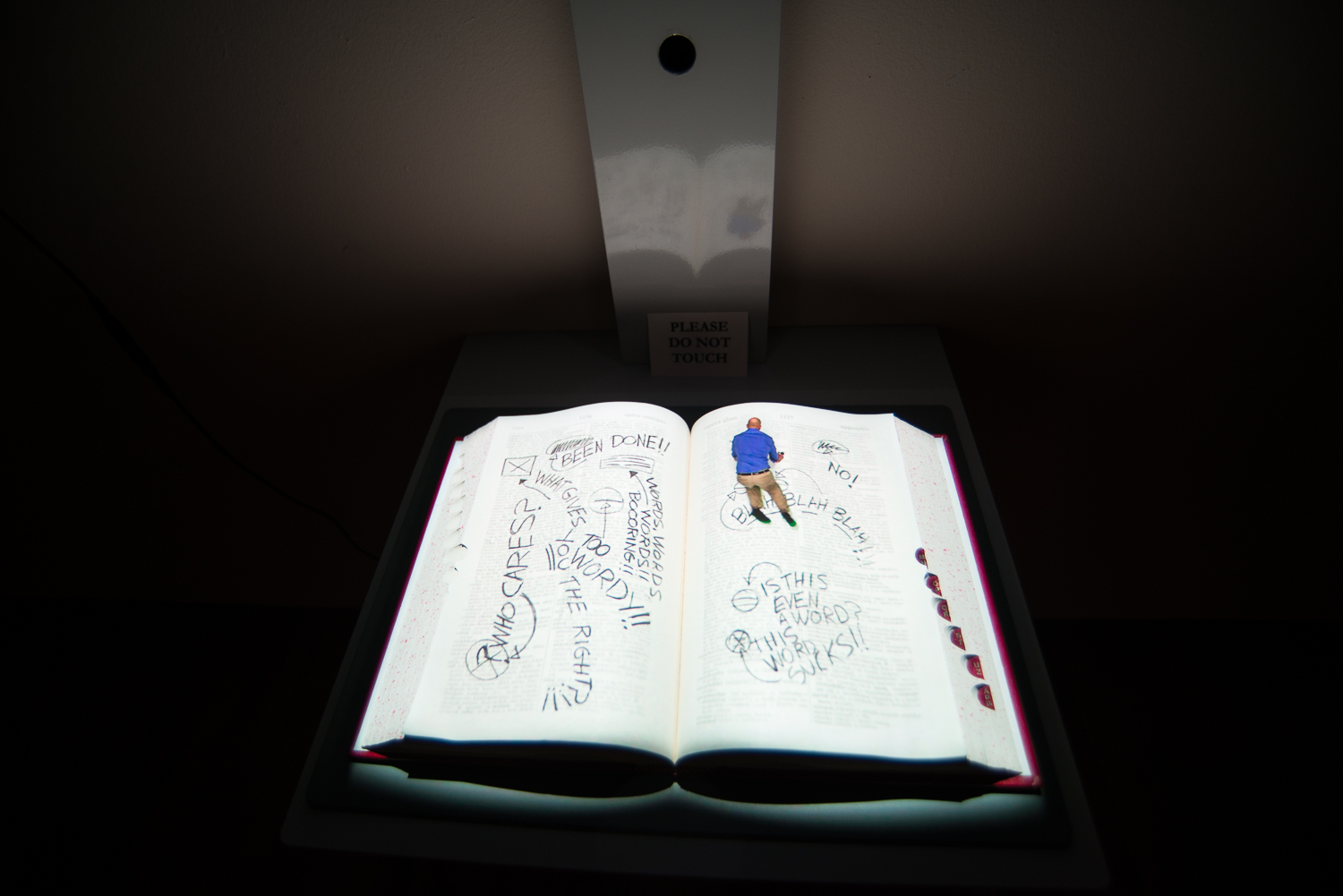 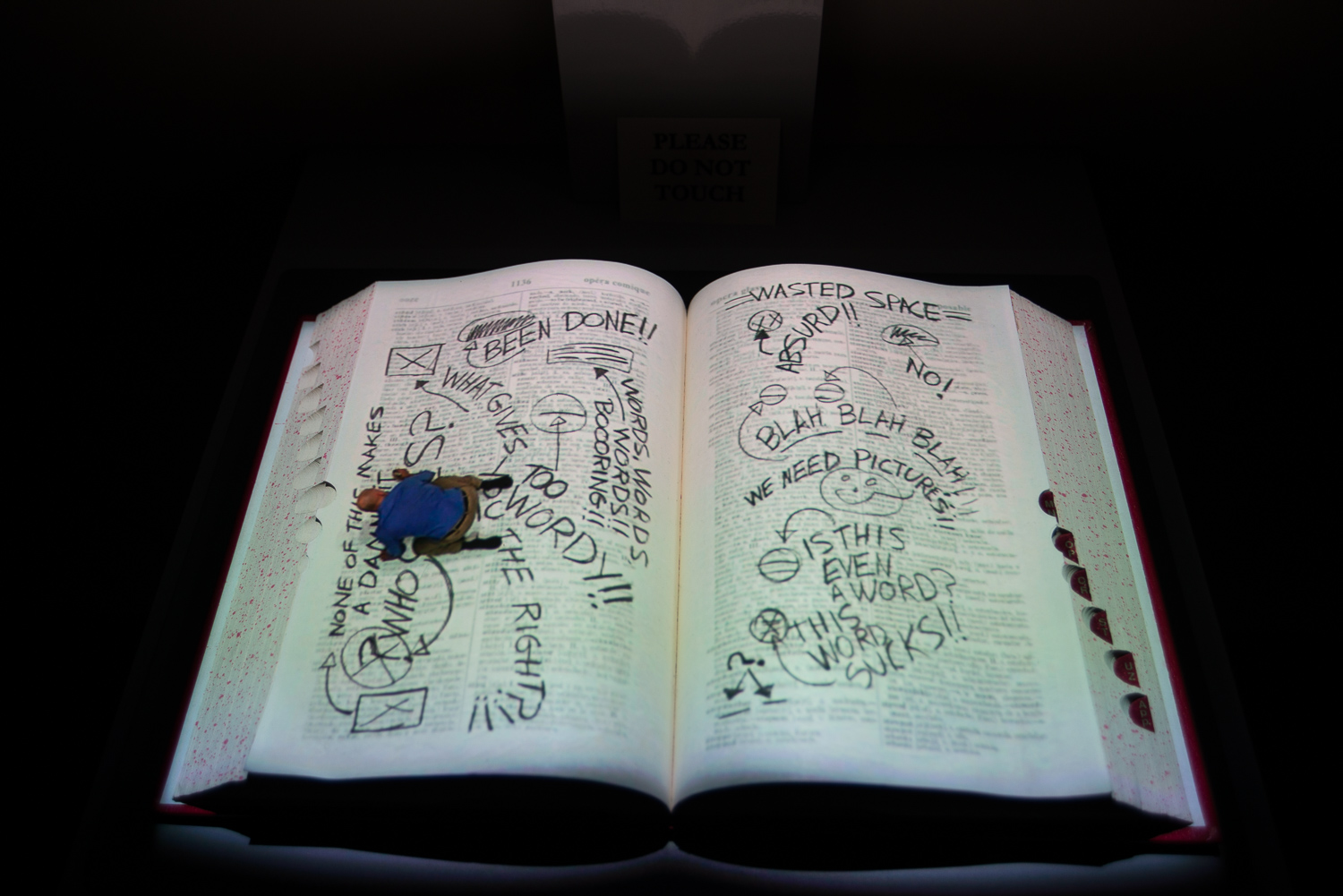 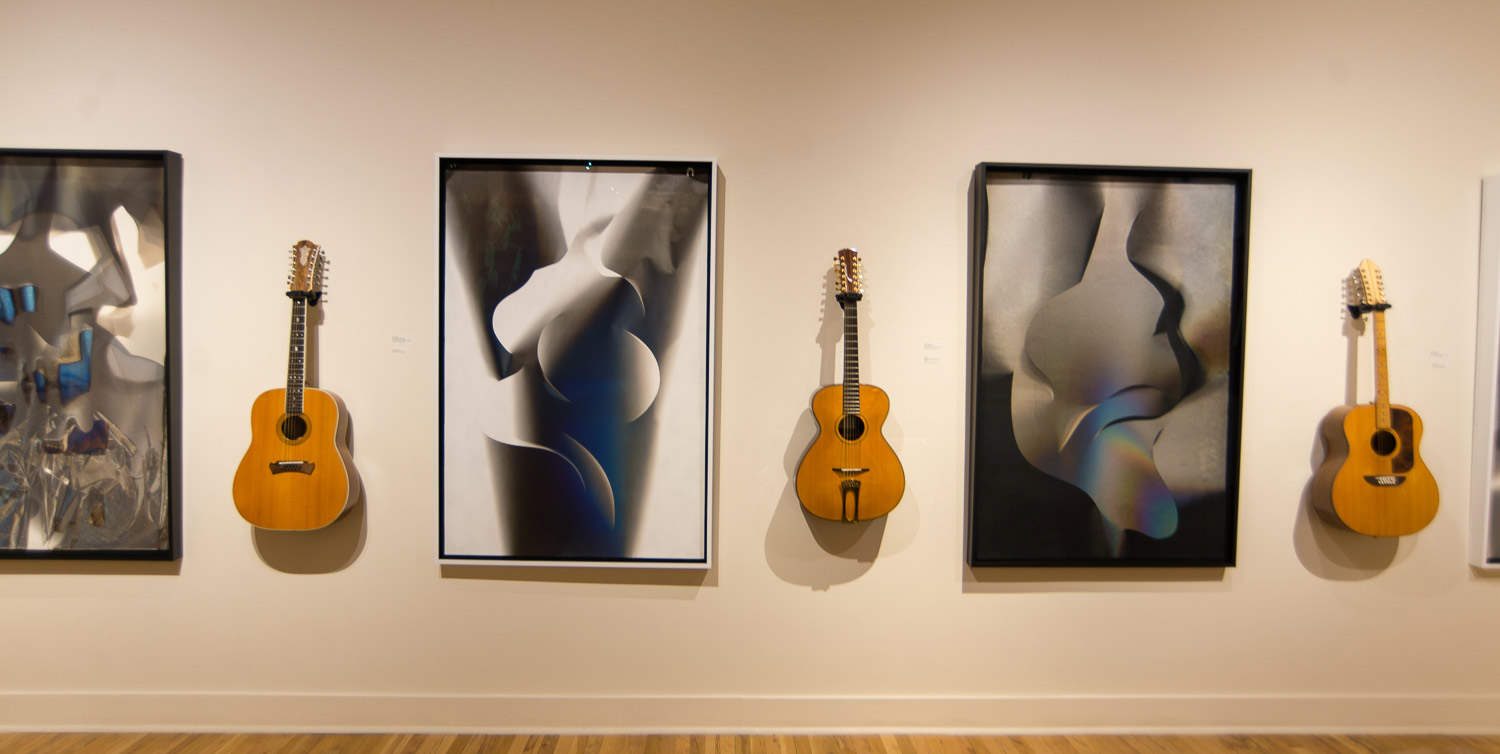 Why are guitars hanging on the walls of the upstairs gallery portion of the Larry Bell exhibition called Hocus, Foucs and 12 ? I’m halfway around the gallery before I realize they are 12-string guitars. I go over and read the notes because I can now see the intentionality — each object has 12 strings, maybe each images is a layer of 12 shapes. They are too overlapping and intermingled to count. But I read and learn the Bell had a hearing loss until it was repaired when he was in his 40s. His father had given him a guitar when he was a kid and wanted to learn to play. He didn’t like it. Later he started listening to the 12-strings and was able to get into it. Since then, he collects as well as plays the 12-string guitar. His familiarity comes across in the images. The primary forms in the works, called multi-media drawings, are similar to the guitar: a neck and curvaceous body. From there more comparisons can be made to the female form. The diaphanous nature of the layers implies movement (distance over time) and music (sound over time). And the texture is complex, mirrors those textures in the wood of the guitar.  In the galleries on the lower level of the Harwood are similar drawings but these are called Vapor Drawings. I don’t know what this means but all these 2-dimentional works I’ve already called diaphanous – vapor like.

More of Bell’s classic glass sculptures are on in the first floor galleries. They are interactive and make a busy gallery more fun. Different, but not less pleasant than the contemplative nature of it when sparsely populated.