Casa Tomada is the title of this exhibition, we are told by its curators, and a short story by Julio Cortázar about a long-in-the-family home taken over by mysterious forces that drive the dwellers out room by room until the family leaves with nothing but a wristwatch and the key.  They lock the door and throw away the key.

Casa means house in Spanish, so we know this exhibition will be about place. We know it is the third SiteLines, the name SITE uses to say they have a newish biennial theme: the Americas in art of today. Tomada? My first guess of meaning is tomato, then tornado, or hurling tomatoes. After seeing the exhibition, my guess hit some truth: art that embodies hurling tomatoes to question the power to hold the stage.

Tomada, said curator José Luis Blondet, is a troublesome word for Spanish speakers and can be translated as: taken over, drunk or under siege.

I took over the artists’ spiel about their work, and asked artists to talk about art — any art but their own.

A House Taken Over

We can easily search and know Julio Cortázar was a modernist writer from Argentina. His stories were the basis of the 60s movies Blow Up by Michelangelo Antonioni and Weekend, by Jean Luc Goddard. We can learn that Cortázar and his mentor, Jorge Luis Borges, were both driven out of their university literature departments by Argentina’s socialist president Juan Perón in the 1940s – the same decade when he wrote Casa Tomada.

Cortázar’s political opinions are not one-sided, we learn if we have a few sources. He supported Castro in Cuba.  According to Milan Kundera in his book of essays Encounter, Cortázar was one of a coterie of South American writers who came to Prague to support Czech writers after a crackdown from communist Russia. He was called an elitist, by Perón.  After meeting Cortázar, Kundera fled Communist Prague for France.  Cortázar moved to Paris, too. This short amount of research leaves me feeling that Casa Tomada, the short story, has an ambiguous message — what should the family have done? Throw tomatoes back at the mysterious force or outlaw tomato throwing? Or, do as they did, get off the stage (move to France).  Cortázar’s metaphor: a house as a place governed is personal, and shows how politics directly effects people and families. Kundera has been, famously, an exiled writer, and the cause, he says in another of his essays, is a government no one wanted, the communist one that lasted from 1948 to 1989.

Mr. Kundera, we in the U.S. are living under the second administration that was not elected by the majority of voters. I want to know how that Communist government you knew was so easily set up  against the people’s desire. I’m wondering how a guy like Perón, who cared about improving the life of workers, could be so clueless about art and could not value culture. I understand your desire to move to France, and wonder if you’ve noticed that our president is pushing a cultural vacuum.  Maybe the first piece inside SITE, in Casa Tomada, will explain how we have a government we didn’t want. 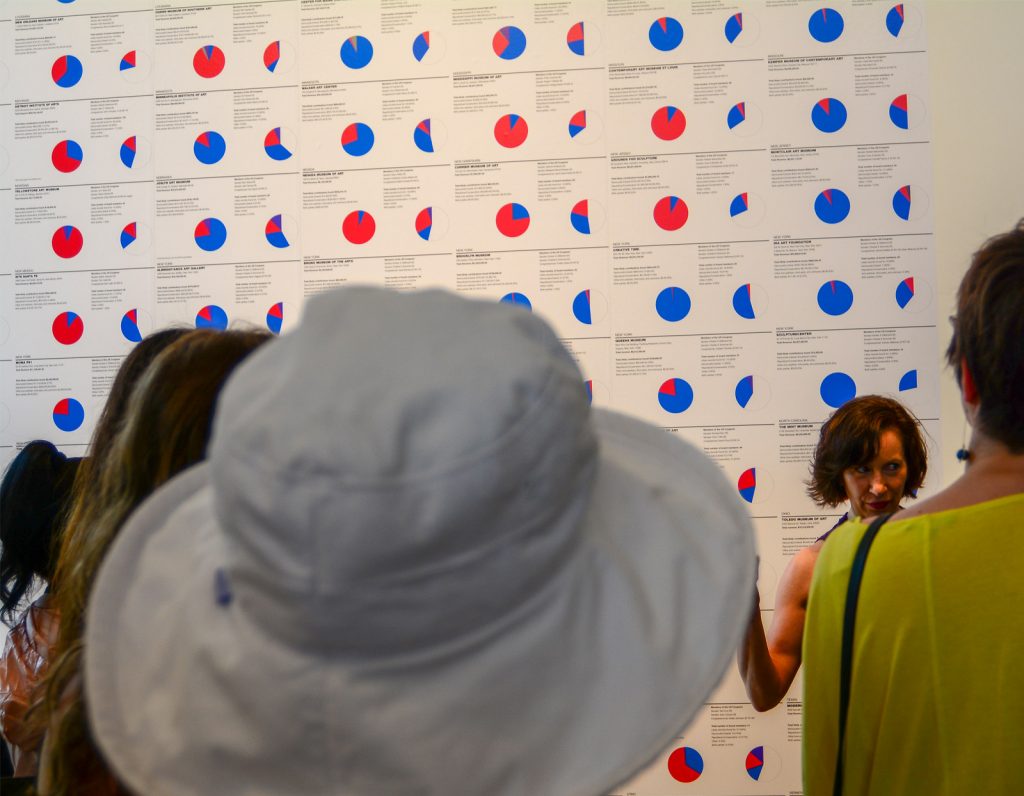 Is it Everyone’s Pain?

Andrea Fraser’s 2016 in Museums, Money and Politics are pie charts that cover a large wall. The pie is sliced according to the amount of campaign contributions made by board members of major U.S. art museums: red to Republican, blue to Democrats, purple to both, and white for what is unknown. Arranged alphabetically by state, Colorado museums are so high the words can’t be read, but the color is mostly red. The information here is sketchy and I wouldn’t base a boycott on it.

Seeing all the pie charts together makes me think that art museums are funded and run by us and them. Republicans and Democrats alike seem to want to make a place where the public can see art. So why would anyone give money to the current batch of Republicans, politicians who aren’t following the will of the people – the humanity that art addresses?  Who voted in 2016 thinking, golly, the rich just don’t have enough money, we should give them a tax cut? Maybe Fraser’s next piece should be how much of that tax break is going, annually, to art museums.

On each museum’s page or section of the wall there is a 2nd pie chart, to the left of the political contribution of the board. Fraser said these were new charts, and detailed the museum’s money. I assumed I could read exactly what this was in the curation notes, but on opening day there was no mention of this, on the wall, nor are these charts in her big book. 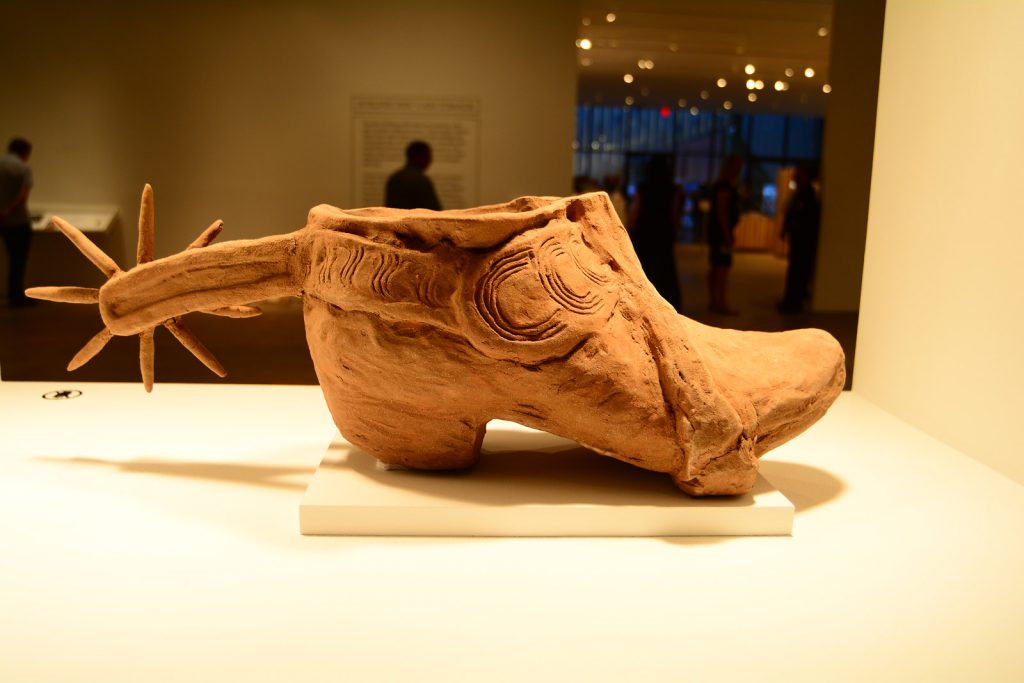 Here looking at this piece, where information is just not enough, I feel like throwing a few tomatoes at conceptual art. Across the room, the curators have given us elaborate information about another work: the amputated foot of the last, hopefully, conquistador Juan de Oñate. The foot was sawn off a bronze monument in Alcalde, New Mexico in 1997. Around 1600, Oñate (and too many other conquistadors) had cut off the right foot of many Pueblo Indians who refused to surrender to his colonization. This foot, a clay cast of the missing bronze one, stands on display to get even more personal than a household, to the foot of the question about the behavior of those who arrive, those who remain and those who are forced out. 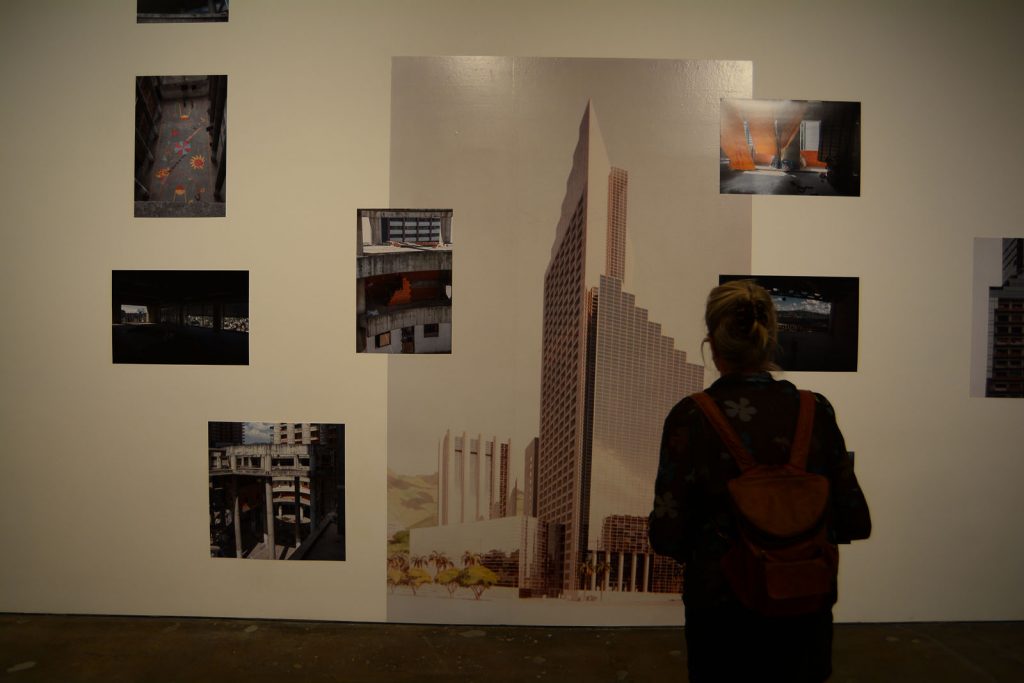 David’s Tower is a work by Ángela Bonadies and Juan José Olavarria who have documented a community of squatters who lived in a bank’s unfinished high-rise in Caracas, Venezuela. We see the rules posted by the community leaders – no children left unattended – and photos of living and commercial spaces – a beauty parlor, for example – that sprung up in the building. Like the right foot of Oñate, the photos shown are just a small part of the story.

According to Bonadies, they continue the documentation they began in 2010, although the squatters have been forced out. The building is now owned by the government, and has yet to be finished. Films have been made David’s Tower, and one is due out next year about Oñate’s foot. This is not the first time, I’ve visited a SITE and been sent down a wormhole to get more information from the shred given in the exhibition.

Do Not Dance for Pay 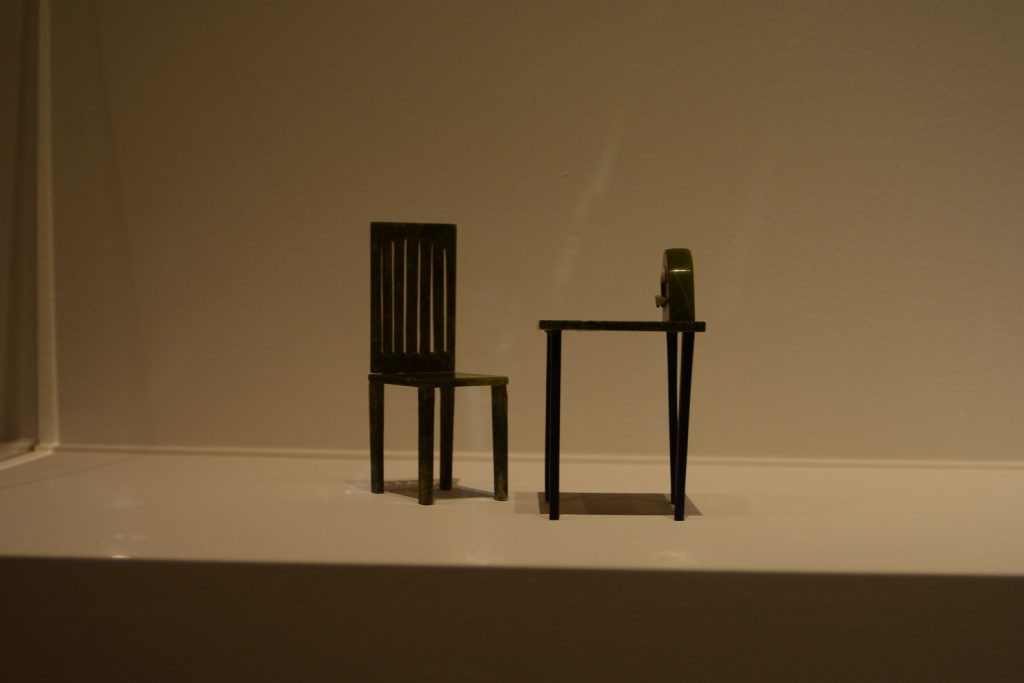 More than concepts that lead to wormholes, this biennial is full of craft and beauty – much of it made by artists with indigenous heritage. These artists stand out in contrast to the conceptual work – but their inclusion is also concept-based. Jamasee Pitseolak carves stone and Victoria Mamnguqsualuk, made drawings, prints and tapestries. Both carry on the traditions of art making that their tribe members where taught in order to make a living after the fur industry collapsed, and their existing way of life was hemmed in by those who arrived. The balance of tradition and working in the present manifests differently for each artist. Mamnguqsualuk being nearly 40 years older than Pitseolak, is more straight forward. She draws in a childlike way with some of a child’s awe for her culture coming through. Pitseolak makes images that are puns and a little more edge. Edgier yet are the artists (ring and totems) –

Edgar Heap of Birds and Eric-Paul Riege are likewise doing this balancing act, and we speak to each of them – and let them talk about the others work. See the videos posted on our channel, linked above.

I am thinking of the whole casa. I remove the metaphor of the house, and just think about the idea of being oppressed by powerful forces. I suppose we can always be shoved  to death.  Sure, before death, we need to think about our remaining power, a power perhaps to lock the door.  I’m thinking about small gives and takes of power that surround us all the time, and we have to decide how to act.  And am looking at people who feel obligated to their past.  I’m thinking about the American Indians artists who feel they must keep with their culture and speak the native language, and also learn the same history of art that I’m entrained with, and speak English, too.  Each one is being faithful to the folks who learned for them. Yet, speak with their own, somewhat dissenting, voice. Maybe what we see in these paintings, prints and sculpture are not so much dissent but thinking outside the casa.  Art made from the future where we could give some thought to the decision to lock the door, save what’s inside for later or watch it decay and die.

I don’t want to throw tomatoes at the residents until they lock me inside the house and throw away the key. Nor do I want to be part of a society that would fire its best writers and make them leave.  And I don’t want to be the artist who walks out of the whole American life, locks the door and moves to France.  But I’m considering it.