– Nasher Sculpture Center – September 15, 2018 – January 6, 2019
Descending the staircase to the lower level of the Nasher Sculpture Center, you are centered on the gallery in front of you. Like walking into the sunset, you can’t help but notice it, and now, autumn 2018, this gallery is filled with sculpture so clear about what it is, that I struggled to find words for it. Arp made sculpture starting around the time of the First World War – one hundred years ago – that is so peaceful. My companion said, so quiet. I agreed and added that there are no marks or anything waving at us saying, “look, look at me I made this.” It is not egotistical. 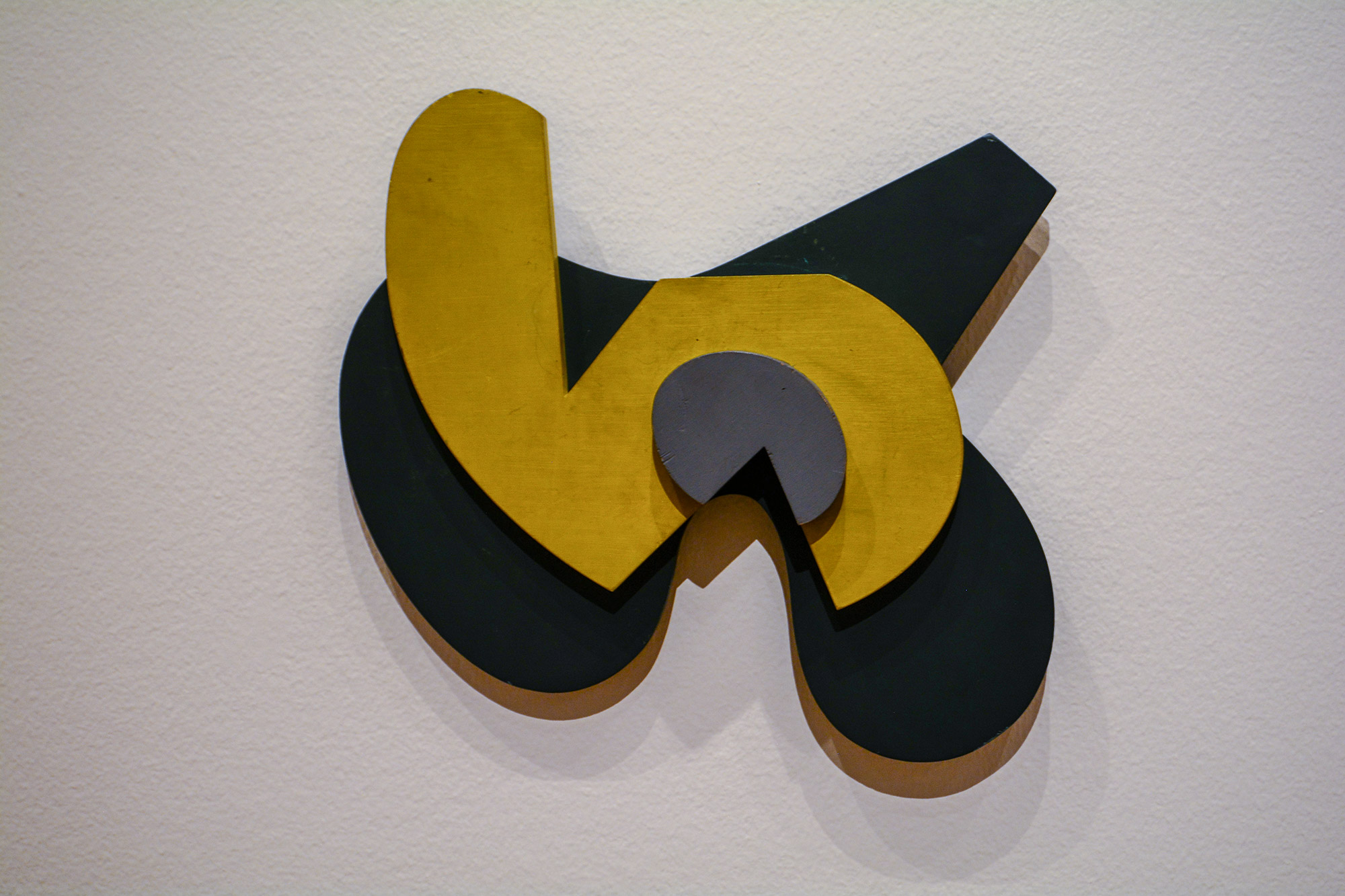 Arp’s works are full of the tension between Xs and Ys and so they are like asking a question about what’s between two things. Like this wall piece made in 1954 called Balance and Glasses. 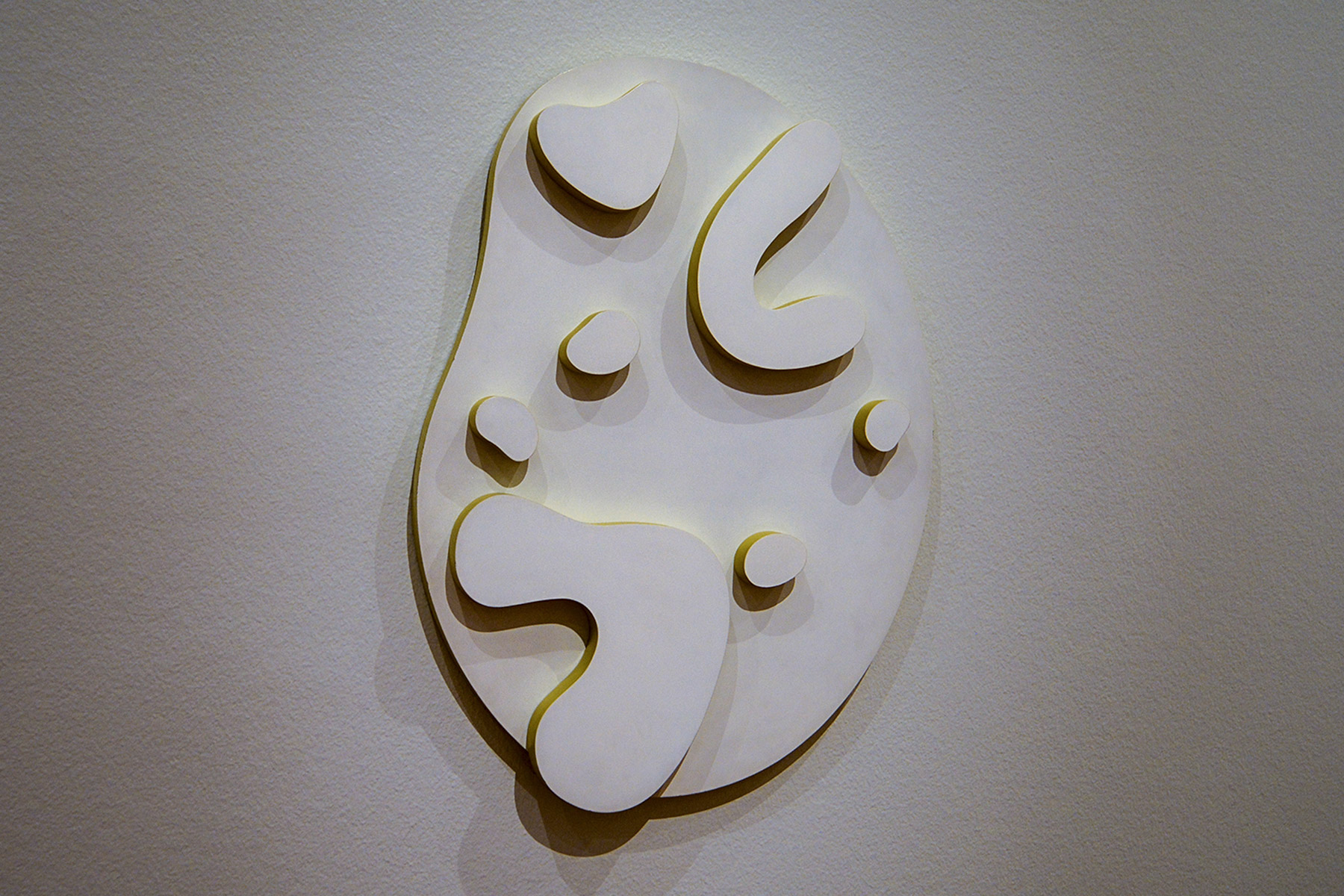 In another wall piece, X is the picture plane and Y is perpendicular to it, and so he paints it yellow. Together, Y makes X glow. You can see it glowing off the wall on the far left of the picture of three sculptures below. From across the room it seemed like light from above was causing this but it wasn’t the case. While we were walking around, a curator was talking to some students and he explained that the museum painted all the pedestals and walls a certain neutral color to fade away from the work. 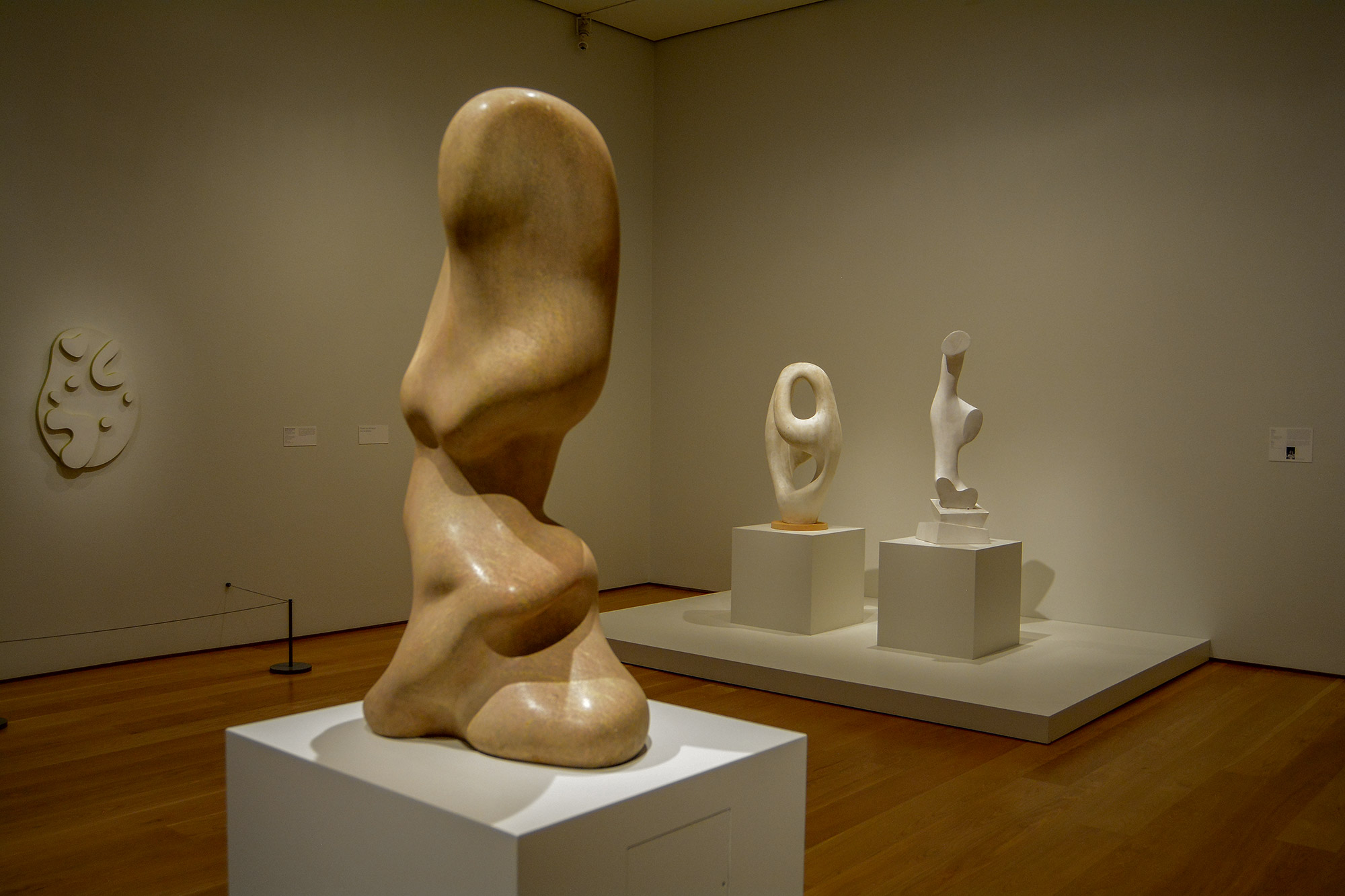 In some work made later in his life, Arp said he relies on a curve or contrast that moves him. A fragment. And so from Ptolemy, the sculpture on the left at the back, he cuts off a piece and creates another sculpture, the one beside it called Daphne. Another was made from this piece, too, and is called Outline of a Life. 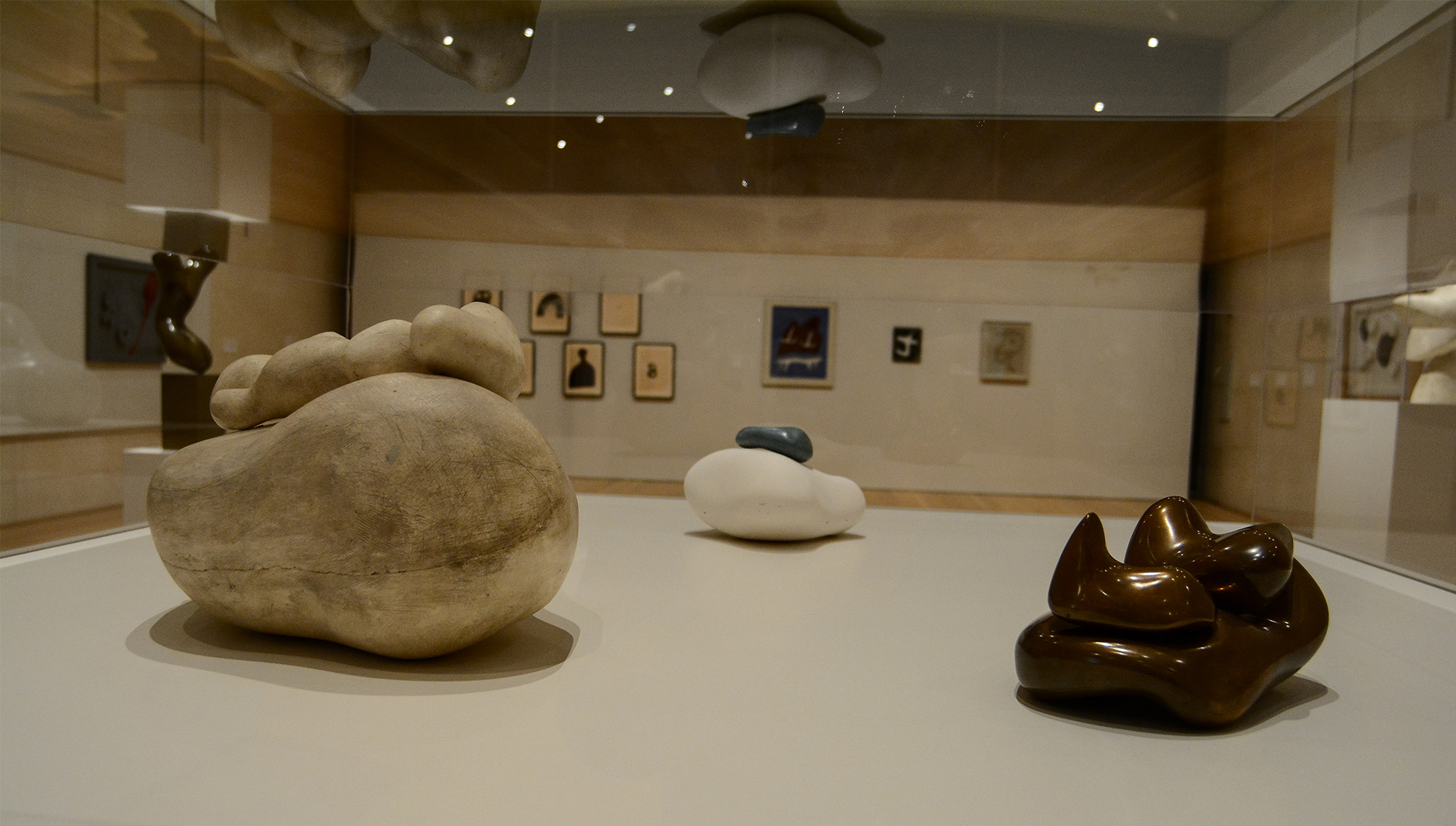 Arp’s titles are a Dada version of haiku – no rules haiku. Like a good haiku, equally wise and clear, emotion without all the fuss of modern self promotion, no bells and whistles, or other attention grabbing devices.

Arp’s simplicity is the beauty of the apple logo to young contemporary lookers and seems ordinary. There are a lot of great simplified forms in the world today. Our nephew joined us to walk through this show and he’s a young adult, an accountant, and he didn’t realize this wasn’t common. He probably doesn’t know who Noguchi was, but he’s seen one of his coffee tables. In this show is another Arp sculpture called Classic Figure, and next to it was a sculpture by the generation before him, which was considered radical in it’s time.  It was a classic Rodin figure. And it looked like a human.  Arp’s does not. It is a gloried form. My nephew didn’t know that nothing that had come before Arp had been to abstracted to this state — just the amount of form needed to tell the story. 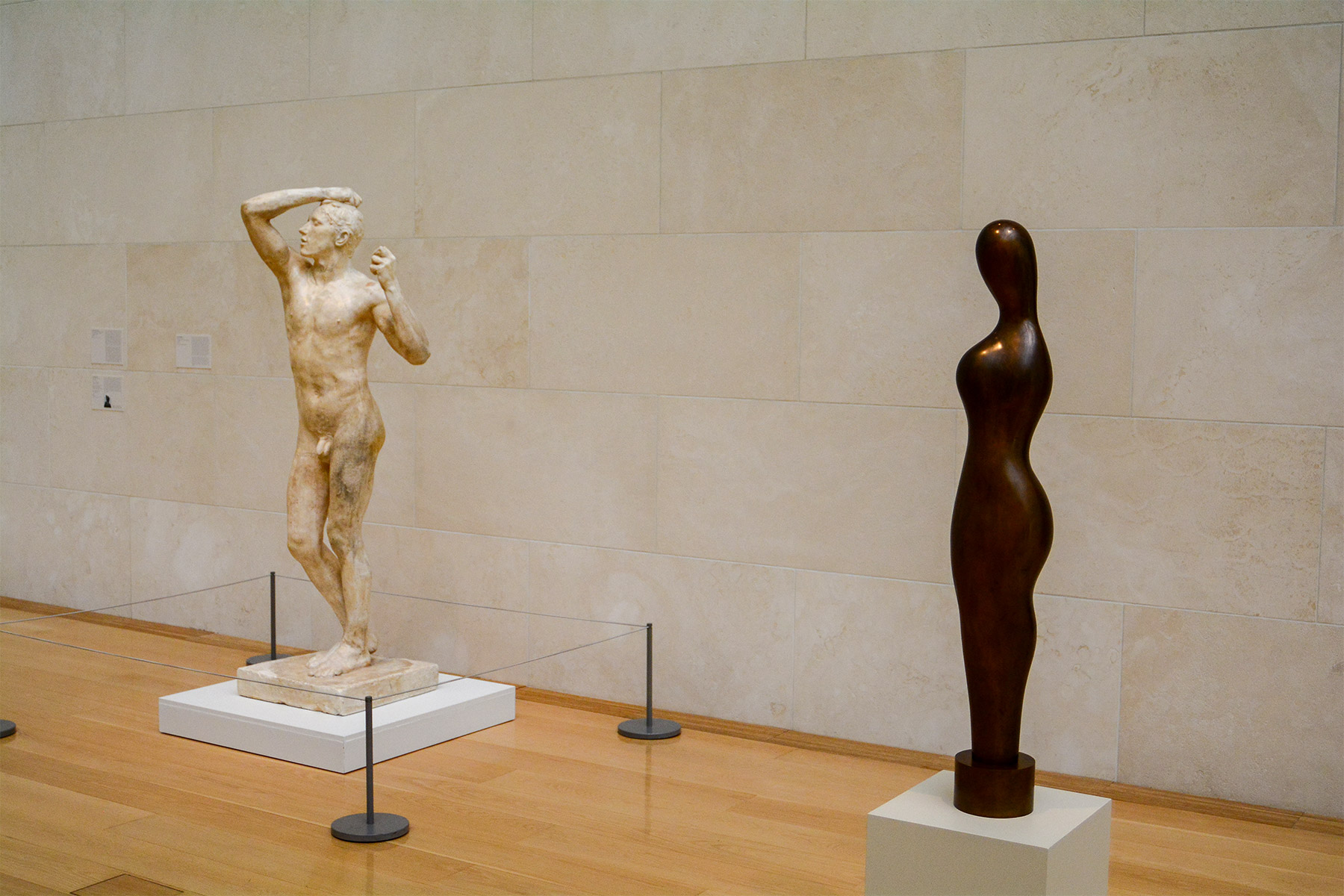 Because of the nicely chronologically order of this exhibition, I can see that Arp’s haiku sculpture starts with forms like 2 objects on a Navel.  Followed and shown with the dream like Two Objects and Three Disgusting Objects on my Face.  These three small sculptures are pictured here together, each one in a different material: marble, limestone and bronze.  Stepping to another group of work,  it is easy to see one of Arp’s primary Dada Haiku methods: the X <-> Y tension noticeable everywhere in his work, the fusion of seeing between two different objects. There are several examples of this in sculptures and wall pieces  from about the same time period, his early period.  I don’t need to show photos, just read the haiku titles “Horse Bird”, “Shirtfront Fork” or “Bird Man”.

Later Arp winnowed down his large encyclopedia of objects to form shapes that use fewer of the forest forms: ‘bud,’ ‘fruit,’ that he often repeated into a texture,  in favor of ‘gnome,’ which is an imaginary object, a ghost. Another he call sphinx. The forms become more complex if you try to draw their outline, but the simple clarity remains. 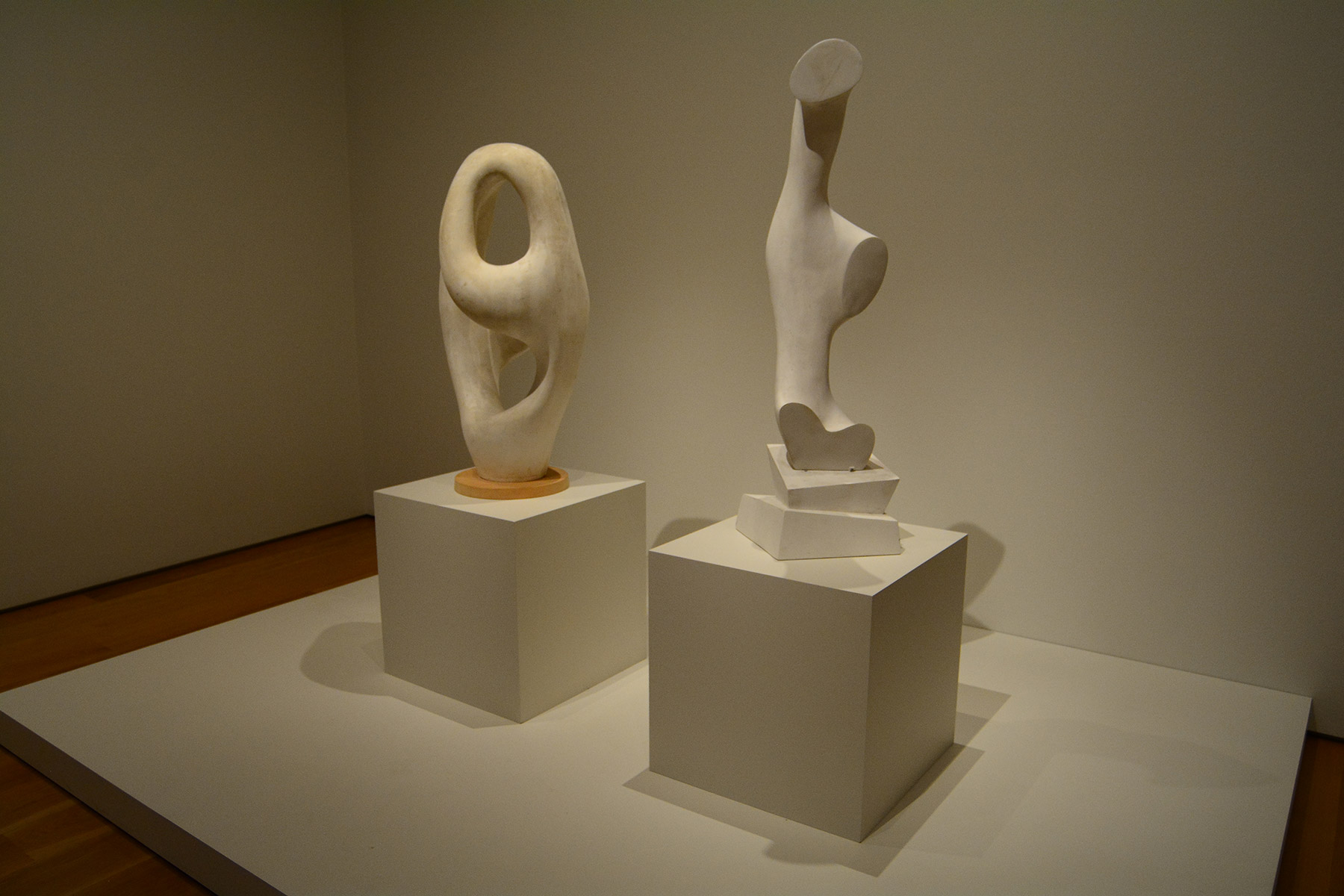 As I’m looking over the line of a life of an artist making sculpture, I am drawn back to think of Ptolemy, who transforms and becomes just one arm of it, with hard cuts showing. This becomes poor Daphne. We see these cuts are solid, endings. Look at the flat face, looking like the human face of Daphne. But we know, because we know this is a fragment of Ptolemy, that these are  open endings.

His work and his writing on fragments is poetry itself:

A fragment is a curve or a contrast that moves me. 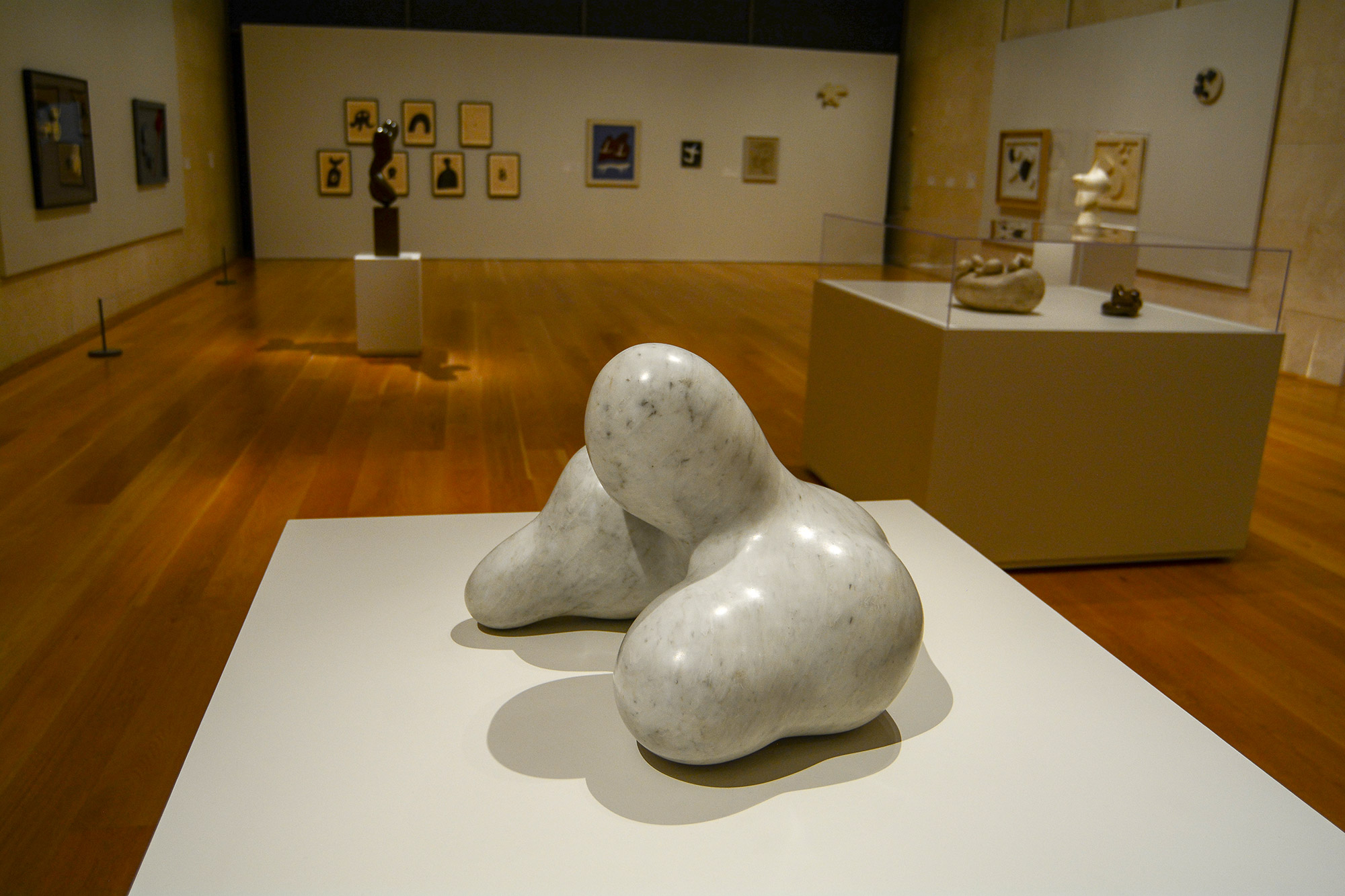