The last days of the big show of Ansel Adam’s photographs were flanked by two other local photographers: John Suhay, works from the 40s to recent time, and John Wilbur Clarence Floyd who shot Pueblo from 1880 to 1920. 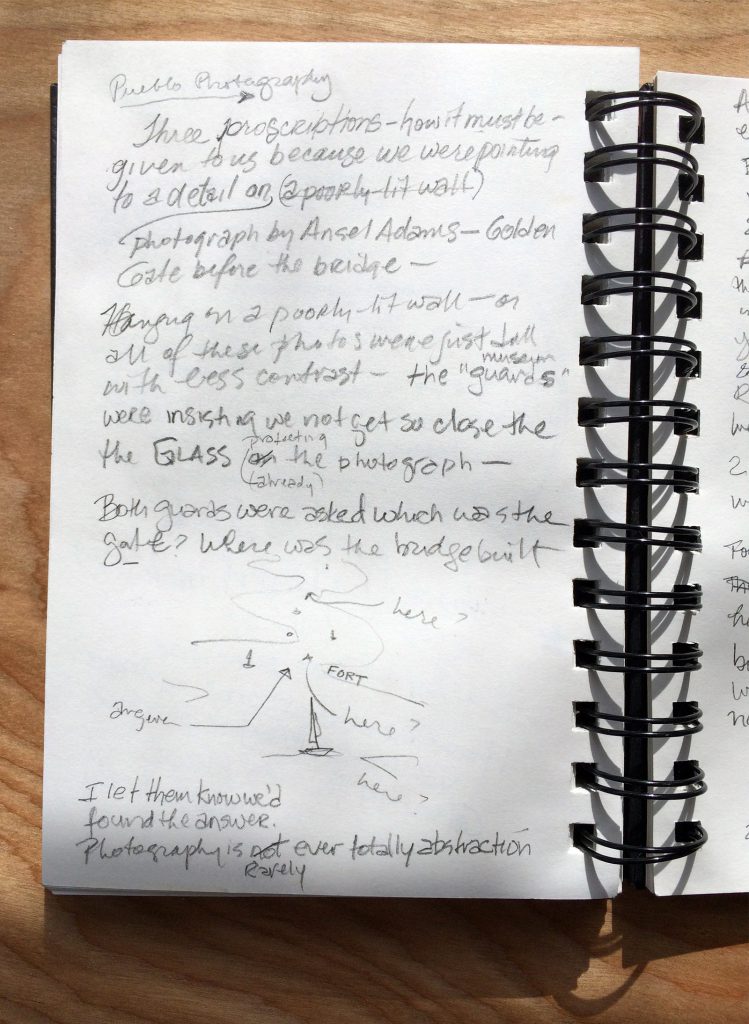 Yea or Nay to Boring Visually

When is photography a failure, really? Maybe the complete abstractions by an artist whose name I can’t remember who exposed film using the TSA and their x-ray machines.

Who decided to treat Ansel Adams photographs so carefully that we were wagged at by more than one museum attendant, more than once. This show of photographs is on the third floor of this great Pueblo art center, and is filled with many wonderful images, many of which I had seen in books and on the Internet.  But who’s going to say it’s not fun to see a roomful of great, big photos of the American West?  Everyone should have the same experience we are having, said my companion, and they shouldn’t have to look through our fingerprints. I wouldn’t touch the glass, I said. I’m not 5 or that careless. From the poem above, and the drawing made to figure out where the Golden Gate Bridge was erected, you can get a good picture of our experience.

On the floor below were photos by two other photographers less shown or known across America. One was a photo journalist, Mr. Floyd, and many of his images were blown up from the newspaper where they had been printed – with half tone dots horribly pixilated. Would be fine for web, but in real life, they were comic, and I longed to see a better reporduction. What happened to the negatives? Are they no longer available for reprint? If so, what a shame.

The third show was work by John Suhay born in 1923. He photographed his hometown from the 40s on and had a habit of making trompe l’oiel  nature shots. A bit of a gimmick, but one step toward abstraction in a medium that can be too classically realistic. Shocking is the vibrancy of Main Street in 1971, compared to Suhay’s later photo taken from the same place in 2001.  And how dead was a Sunday in the fall of 2016 – with posters telling voters to re-illigalize pot in November.  Good luck with that, Pueblo.