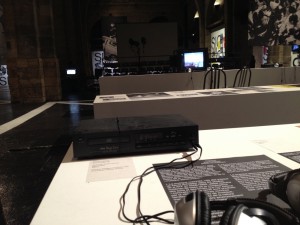 BORDEAUX – Every idea has already been had, we’re just reinventing the same ones. This was a commonly said phrase before the digital era. Now we think we’re having new thoughts – like the idea of sharing a car ride, or renting our spare rooms (i.e. AirBnB).

A retrospective show of the SIGMA contemporary art conference, which took place in Bordeaux from 1965 to 1990, reminded me that contemporary art can be a whirlwind of incredible ideas that leads to all kinds of future developments – or at least it was in the nineteen-sixties and seventies.

The show, currently at the Bordeaux Contemporary Art Museum (CAPC musée d’art contemporain de Bordeaux) through February 2014, is not a visual feast. Most of the work is black and white, posters, video clips and a lot of audio accessible with big headphones. You have to hit the play button on cassette players to get some to start. For some kids, or iPod users like myself, we will stare at the black box sitting on the desk attached to our headphones and try to decide which subtle, Swedish-designed, physical button to depress. 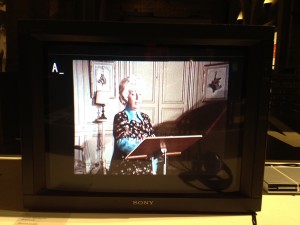 One sound artist is featured in this exhibition with video of himself walking through a concert hall with electrical inputs taped to his skull. The idea of making music from thoughts, or brain activity, is a grand one, but the physical music was not much to hear. From one of the black-box audio players I heard more of this same artist’s work – he was using everyday sounds mixed with electronically generated tones. Electronic music, the card said, was invented in the nineteen-fifties. Ten years later this artist was trying to use it to make something listenable. It was more enjoyable than the brain sounds, but less interesting on a grand scale than Pandora (without ads – it was better than Pandora with ads). 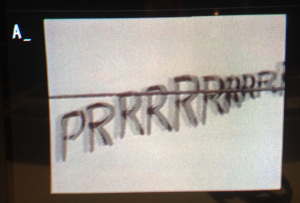 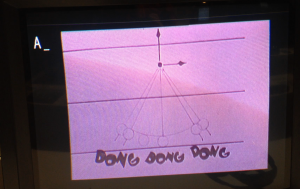 And this, it occurred to me, is what we have been doing since the grand conceptual art boom happened in the middle of the last century. We are trying to figure out how to use those big, global, far-fetched, avante-garde ideas. Our goals vary. They may be to use them to improve the quality of life on earth, to make money, or just to communicate. By communicate, I mean more that just bringing them up at a dinner party. We, who believe in progress, hope to put them to use in our civilized, industrialized, global-community systems, our time-based consciousness, and this means the use of our current machines. And getting machines to bend to our will is very time consuming.

We are being kept very busy developing software to use these ideas to make it easier to do things, and often to do these things by machine, which makes us even busier. Much energy is going into making it easier for programmers to make the machines do what we want them to do, and much goes into spewing information.

These communication attempts, done by so many people, has made current discourse a freeway of ideas, so congested we’re all getting there very slowly. On top of the volumn of traffic, we’re also discovering not everyone has a fully functioning car. Navigating this complicated network seems to require a lot of energy and a huge amount of luck. Receiving anything from it requires an even greater amount of filtering. To explain or use these ideas – that may well have been generated back there when the Sigma Conference was exposing them – on a broad scale so that they can be chatted about, liked, dis-ed and eventually really discussed by more and more people is 10 parts marketing busywork and 1 part real communication. 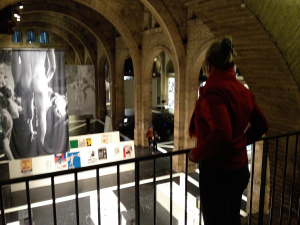 So, we’re put the avante garde in a coma, while we figure out how we can make use of it, when it’s revived.

A lot of artists, myself included, are looking back (albeit through the lens of the sixties) at the previous big-idea period – Dada. It’s now been nearly 100 years since Marcel Duchamp painted a mustache on the Mona Lisa, entered a urinal in a major exhibition, and made a sculpture of dust.

The SIGMA exhibition was filled with Dada-esque clips from street performances, crazy naked theatre and dance, eerie non-sensical film, and interviews with the artists who were more conceptually interesting when talking about their ideas then in the display of them (in dance, theater or new art forms). Painting and sculpture or any plastic art was declared dead in this period and was completely unmentioned in the first SIGMA event.

Being in a Contemporary Visual Art Museum – the Bordeaux one – made me ask myself what Contemporary Visual Art could do to help this communication, especially when painting and sculpture seemed to have been reborn only as decoration. I don’t feel painting is carrying its weight when it is simply a competent portrait, an attention getting poster, a pretty picture tattooed on a body, or a nice design spray painted on a wall. Nor is sculpture, when it is a war memorial or a public art project chosen by popular vote.