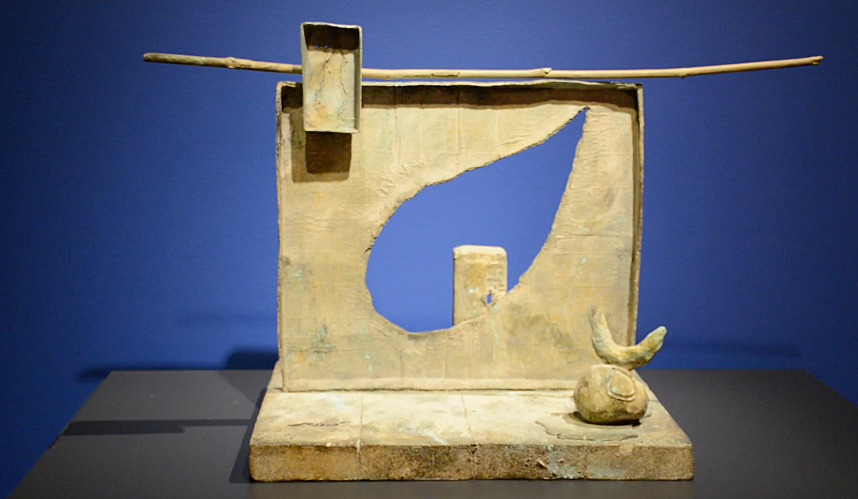 “I painted in a frenzy, so that people will know that I am alive, that I’m breathing, that I still have a few more places to go.” – Joan Miró, 1978

A while ago, a young artist friend of mine told me “The avant-garde is dead”. He was quoting one of his art history professors and this phrase has bothered me ever since. I think I am the avant-garde. I am one who is thinking forward. In fact, I know I am because ideas I have had are realized by someone else and appear a few years later. Am I dead? Is art no longer forward looking?

Just after entering the Denver Art Museum exhibition of painting and sculpture by (wiki-cited avant-garde) artist Joan Miró, I see that quote taking up most of a wall – “I painted in a frenzy, so that people will know that I am alive” …

The show contains more than 50 paintings and sculpture made after Miró was 70 years old. He lived to be almost 90 and so the show covers 20 years of work, and explains why he was painting in such a frenzy – some art professor was already saying the avant-garde was dead. 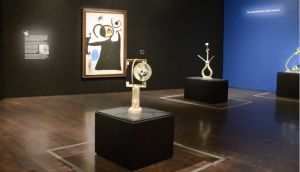 If the name Miró doesn’t bring to mind the child-like and funny artwork the artist is known for, then seeing an image or two will trigger your memory – and you might think you’ve seen ads or t-shirts like this. After 50 years avant-garde images often become popular design.

But while design was appropriating Miró, the man was still alive and making art, and pushing it forward. To describe this, the Denver Art Museum subtitled the exhibition : Insight and Imagination.

Let’s start with Insight. In the 1920, Miró was skillfully painting surrealist works, political because of the freedom of thought of the artists and poets in this movement, and their support of the cause of the laborer. He’d missed the Great War, being from neutral Spain, but by the middle 1930s his county was in Civil War. Miró sided with the Spanish Republic, the democratically-elected government, but the other side, who by coup d’etat were holding power, were supported by Nazi Germany and eventually won. The fascist dictator Franco takes over and keeps a tight hold on Spain until his death in 1975.

For the Paris World Exposition of 1937, Miró made a mural called either The Reaper, or Spanish Peasant in Revolt. Miró’s friend Picasso painted Guernica. Like much of Miró’s work since surrealism, his mural was child-like and fun – except for the title – and was not overtly political like Guernica. And it has since been destroyed. And a few years after the 1937 event WWII starts. France, nor Spain, is a place of liberty for an avant-garde artist.

All of the works in this show are borrowed from the Museo Nacional Centro de Arte Reina Sofia in Madrid. The director of that museum spoke in Denver about what he thought about Miró, after reminding me about the tragic events that this artist had to endure.  He didn’t speak about symbols like birds or stars or politics or even landscape. Miró, he said, was representing life.

It is wonderful when you see something, today, that talks about life today. And maybe that is what it means to be avant-garde.

Or for Miro, life in 1963-83. By this time, the artist was living in Mallorca, Spain. Franco wouldn’t persecute him, but exploit his success as a product of fascism. Miró could do what he wanted and he probably had a little money saved. So he casts big sculpture in bronze.

In the past, his sculpture were usually made with found objects – the actual object – but during this period there are united as one material, and while the object – a shovel, nails, spools and stones – can be recognized, they have been transformed. (A mold was made of the object either right before the casting in bronze – as in sand casting, or in order to assemble a wax model that will be placed in another, a refractory, mold and cast using the lost wax process.) These sculptures are durable and strong, covered as bronzes usually are with a patina. This coloration is rich and textural by the artist’s choice,  but doesn’t separate the assembled forms. They are united and clear.

Clarity is what I’ve always liked about Miró – there is usually a sparsity of marks – and this sparsity is very obvious in a group of paintings in this exhibition which are not much more than a line.  These paintings are condensed and powerful and remind me of good poetry. Miró is one artist whose work I don’t want to re-arrange or remove an annoying part. He only includes what’s necessary, and it seems to me that living long and only made him more clear and  insightful.

I’ll give you just a little more. See the tin can that’s integral to this sculpture? It is not made of metal when Miro was assembling it – it was wax. Notice the marks in its bottom.

And so we come to the second part of the subtitle – imagination. Miro doesn’t give you everything that would come to us in a documentary photograph of a landscape or a scene of life. He leaves it to the viewers imagination – and this is the experience of seeing Miro.