Denver- Museum of Contemporary Art – March 3, 2018 — Three current shows at the MCA Denver seem to be about fitting into society or, as is obvious in the case of the videos on the lower level by Arthur Jafa, they are pointing out how we don’t fit in sometimes. 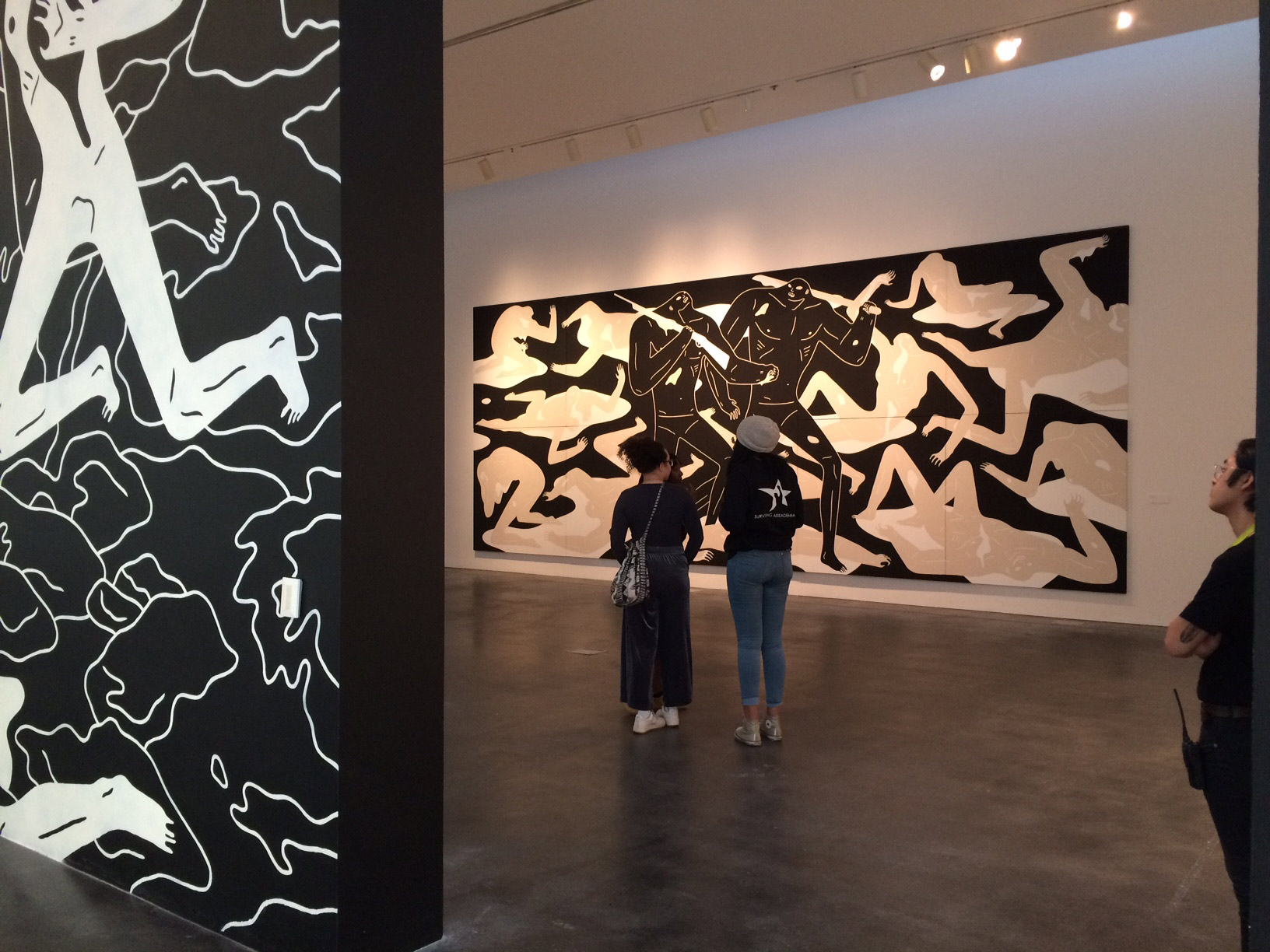 Peterson’s work relies on a cartoon drawing of humans. This form is repeated in paintings big and small and in shiny cast resin sculptures. The cartoon figure has no neck – a tiny head sitting directly on broad shoulders – and wears jockey underwear. 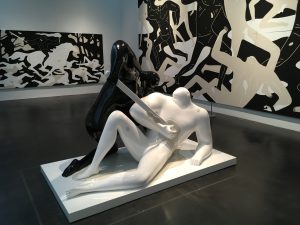 If the figure is an oppressor he is filled in in black and if portraying the victim, the figure is painted in with an off-cream white that is more like gallery walls than flesh. The artist – I don’t know his race – doesn’t seem to be choosing the colors because he’s racist and blacks are bad. It’s more like black hat, white hat as used in SEO, for example, or on West World. I do know the artist is a male, and may be sexist. He changes the drawing pattern for females of this cartoon world. They are naked with a patch of neatly outlined pubic hair and obvious breasts. Victimization of the vulnerable might be the symbol that these female cartoons are meant to represent. I’m not sure it works across genders. 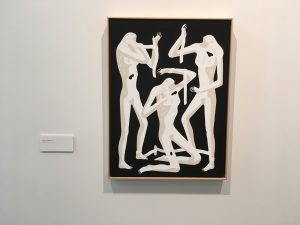 Do men experience castration anxiety when they see a naked woman being victimized? Or just outrage at their possessions being violated? Shame or humiliation? Women, when you look at Peterson’s female cartoon victims, I think its clear what you feel.

According to Thorton Wilder in his introduction to Gertrude Stein’s Four in America, Stein a masterpiece occurs when ‘certain minds occasionally report life without adulterating the report with the gratifying movements of their own self-assertion, their private quarrel with what it has been to be a human being.”

Style seems to be that self-assertion that gets in the way here.

I’d be lying if I wrote about this work, that was the first of the three shows we saw on Penny Saturday with a full house of cheap art viewers, as if I’d fully given it my attention. I spent probably 15 minutes tops looking at big colorful constructions marveling mostly at their physicality and how the artist carves through MDF board to expose the grainy layers of plywood below and uses that naked wood 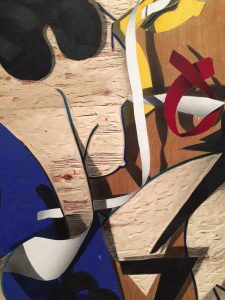 very often to represent the naked skin on human forms in his composition. Nice touch. I may have been carried away by the craft and didn’t give the works enough time, but I was not blown away by the thought that Rodriquez-Warner has reported life without the clutter and confusion of his own self assertion. Does that ever happen if only 15 minutes are given to more than a dozen paintings? I will amend this post, if I find out more when I give it more time.

While feeling bad about not getting more than how nicely made these paintings of Rodrigues-Warner are, I started to ask myself what is a masterpiece of visual art.  Marcel Duchamp’s Fountain — entered in an exhibition put on by the Society of Independent Artists in 1917. This group was fed up with the ‘Academy’ that made or broke artists by selecting their work, or not, to be included in their annual exhibitions, and thus formally stamping on each entry what was art and what was not. This group had said they would show anyone who paid the fee. 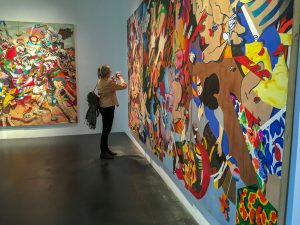 The entry of this piece, titled Fountain, which was just a factory made urinal, and signed R. Mutt, was rejected. Duchamp who was one of the organizers of the Society said, hold on a minute, you’re being hypocritical.  The piece, Fountain, became famous because Walter Stieglitz photographed it, they published it in avante-garde magazines and promptly lost it. No one is really sure who actually signed the R. Mutt or who had the idea to make this piece and enter it, although people just say it was Duchamp. We do know today that it is called one of the masterpieces of modern art. And rightly so.  It talks about life without any self-assertion. 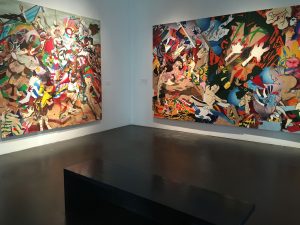 On my mind as I think about this Steinian idea is another piece of art writing by Peter Schjeldahl.
He’s writing about a photographer, Stephen Shore, and one of Shore’s photos was pictured in the magazine. along with the story that includes this sentence: “What gets me in Shore’s work is an easeful acceptance of a world – the actual, whole one — in which I have never felt quite at home. (A feeling)  essentialized by Edward Hopper.” Shore’s work looks interesting, but it’s Schjeldahl who has written a masterful sentence about why he thinks Shore is 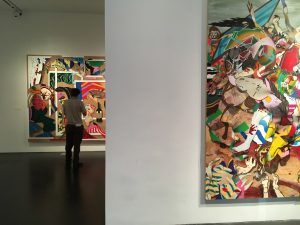 capable of masterpieces.  And I’m not sure, yet, if there are any in this show.

Not fitting with fitting in.

Arthur Jafa show — called  Love Is The Message, The Message Is Death – names another way we see and deal with opposition – the logical syllogism. Love = Message; Message = Death, therefore Love is Death.
I’m not certain but I think the point of Jafa’s films are to say, we all love the way black folks can dance, and make music, but some of the other humans around us might just think death is necessary when those folks start challenging the social order — Dr. Martin Luther King, for example.  And there were many who apparently didn’t like Mr. Obama being the president. Is that racist? Probably, and they may have other feelings tossed in there with their racism, I don’t know.  I just read in the New Yorker that Arkansas folks didn’t like Obama because he thwarted the dynasty of the Arkansans – the Clintons.

I admit I want my president to be someone that comes from where I come from. That’s why I wanted the east-coast Jew instead of Hilary Clinton. Bernie Sanders is coming from radical 60s and 70s political, socialist thinking just like me and that’s more important to me that that someone is from Colorado or even the west.  Or that they are female, like me. 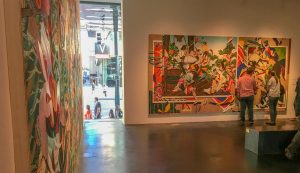 Or is it that I am a sexist, and unable to escape my indoctrination?  Like all people born before 1980, who was shown that to fit in, one should believe that women aren’t capable of non-emotional thought and clear, strong leadership.  Maybe I think women shouldn’t be half the members of congress, maybe I don’t think women artists should be as numerous as men, or that women aren’t as interesting to read. Maybe I wouldn’t say that aloud, but maybe sometimes I just catch myself having thought it.

While I was mesmerized by Jafa’s video pastiche taken from TV, social clubs, performances and home movies of black people dancing or being violently arrested, my mind drifted off to imagine what this would look like if it was just women. It might be better as just audio. We misunderstand images of black people. We misunderstand the speech of women.