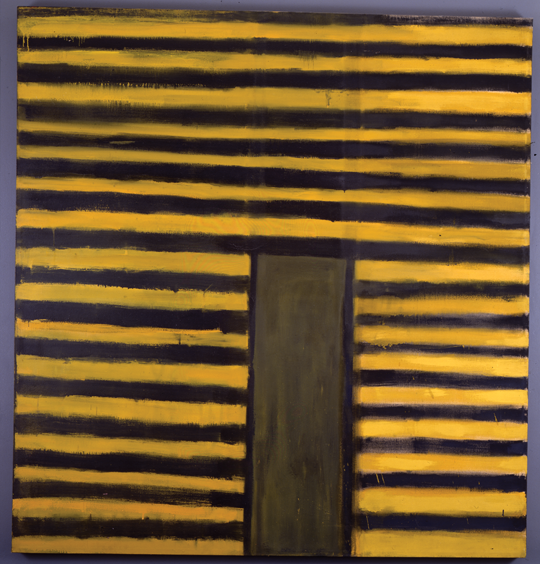 “What does it make you think of?” she asked about the old one. Of course people thought of New York, subways, storefronts, etc.

This early painting has almost too much reference – the black shape almost  a doorway.

In later work, Stella shed anything that could be a reference. And this seems like the natural ending of  Abstract Expressionism – the American art movement that began in the late 40s. I see the cycle of Abstract Expressionism begin with post-war artists painting myths reduced to symbols and gestural figures like Willem deKooning painted and drew. The work allowed for multiple interpretations, like looking at clouds and seeing faces. They feel made by humans, while being open, and this openness was and still is these paintings greatest attraction. Painting evolved further to abstraction to gestures as in Action Painting, as Jackson Pollock called his work.  Rothko’s form-based paintings refined the subject to pure emotion. At various times, Abstraction was striped of subject matter until nothing remained except the all-white or the all-black canvas.

Stella went from making paintings that have an obvious brush stroke (East Broadway) to flat color applied in a logical way – no chance for an accidental subject to slip in. Minimalism was born. 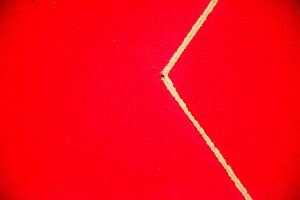 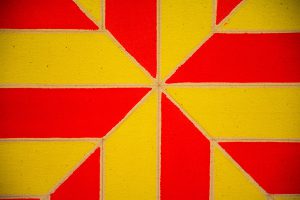 Details of these minimalist works reveal the logic: you can see the pencil marks used to layout the piece, and how paint was applied just a fraction of an inch from the mark.

In this style, Stella made Jasper’s Dilemma, the same composition in color and in black and white on the same canvas. The title suggests something to think about, but it isn’t a subject. Even when Stella names paintings – he often uses a place name – they don’t contain images of that place. Maybe Stella was thinking about some of his childhood haunts during the time he was painting the Irregular Polygons, or maybe it’s just a name that helps him distinguish one from another – something more than a number.

While the guide and her tour group are naming subway entrances and other East Broadway subjects, I think these  early Stella paintings look like Sean Scully’s work from the 80s and 90s. The Fort Worth Modern often has a whole room upstairs devoted to them.

Decades after Stella painted East Broadway, painters like Scully concentrated on making the humanness of their work obvious while keeping the subject open. Stella doesn’t go back; he leaves progress in that vein to Scully.

Stella’s new paintings are much more frantic like Das Erdbeben der Chili (Earthquake) in Chile. The guide didn’t ask what one saw in that painting because it just feels like an earthquake or how you feel after drinking a few terremoto’s (Terreomoto is Spanish for earthquake & the national drink of Chile).  Or the German Das Erdbeben der Chili – a novella written by Heinrich von Kleist (1777–1811) and published in 1807.  Seeing chili, instead of Chile, I’m also thinking about food.  There is nothing recognizable to let us know which meaning.

Like Das Erdbeben, the later sculptures are no longer minimal, or simple and clear. They are open, but tightly knit and feel like a boondoggle you shouldn’t venture toward, lest you get stuck. 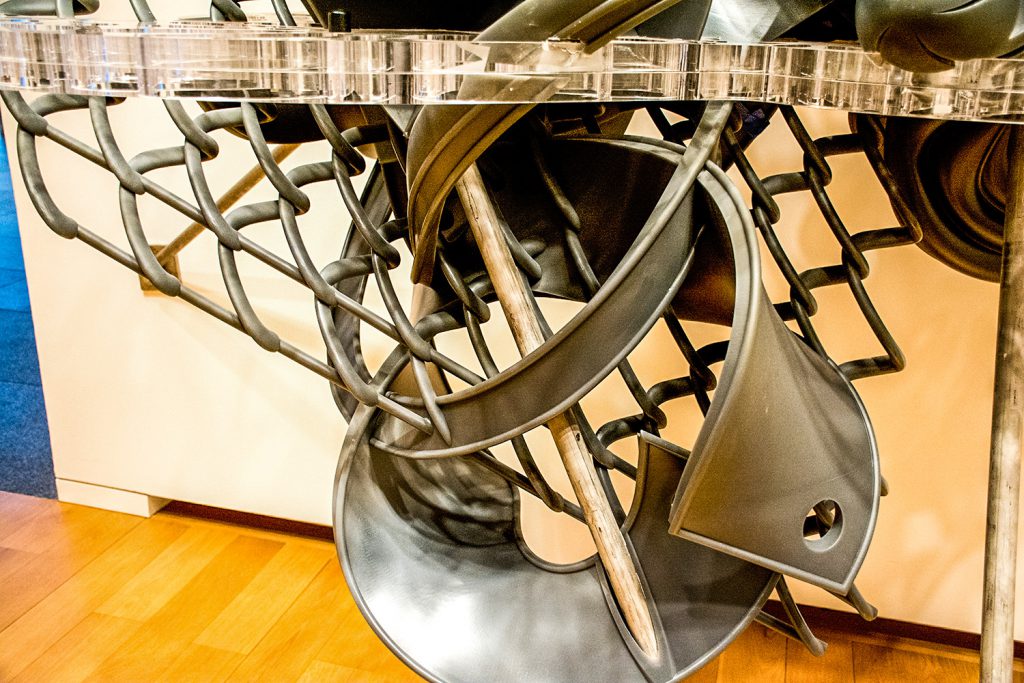 Complex and messy, these sculptures are rarely about form. They are more like paintings pushed in the third dimension. 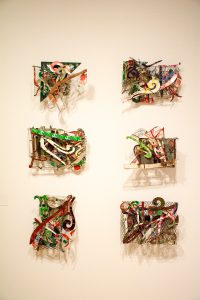 A group of maquettes shown together, stacked as if they were on Gertrude Stein’s wall, are as busy as shag carpeting. I get close to one, and there are interesting things to see, but it feels so puny compared to the poking and trapping ones that aggressively hang from the wall. Grand scale 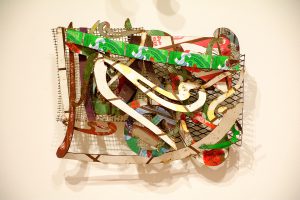 has always been an important feature of Minimalism, forcing you to notice a work even when it is so simple it could be overlooked.

Big or small, there are no pencil marks, no math, no optical illusion that helps me figure out these works.

Maybe history can. Stella was known as a ‘formalist’ painter because the early works are about forms – shapes on a canvas, not volume as in Henry Moore’s sculptures. Stella was one of the first to paint on a shaped canvas – the painting is an object like a sculpture, albeit somewhat flat. And while the new works are sculptures, they are really more like paintings – this time exploded paintings.  They are a complex image, like a multi-layered Illustrator file with all the layers turned on – and make no sense. They are devoid of reference. There is no dog’s face in that cloud of stuff.  You’re not supposed to feel.  “What you see is what you see,” Stella famously said.

I see my grandmother’s needlework in the small wall pieces and yawn a little. Big is impressive. But another small, very recent work, does amuse me. It is an homage to Alexander Calder (known for his mobiles, stabiles and circus) and Kazimir Malevich – an early abstract painter and minimalist (who lived 50 years before Minimalism) and is probably slated for grand enlargement, too. 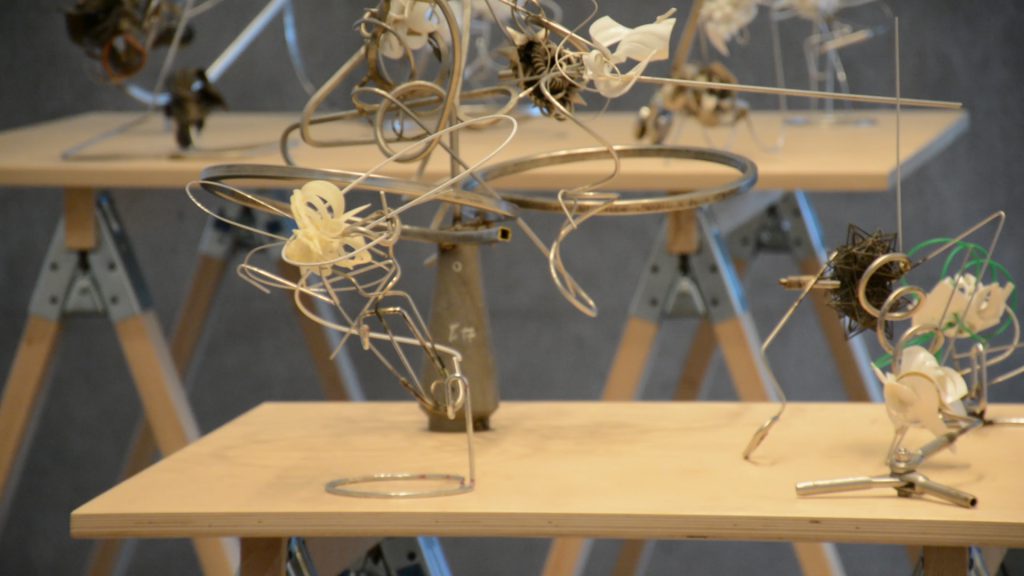 The Calder-Malevich piece sits on some pretty nice saw horses about the height of my patio table. The plastic bits were 3-d printed and are obviously of today. I can see the total form, can line up or visually alter the field through which I’m looking at one element or another. Unlike the large pieces, I can get behind or above the forms. And it is less blaringly colored. I hear music, not a horn honking. Like all of Stella’s work, they are not a scold, they  have no political intent. They’re just clowning around like Calder’s circuses.

I want to keep looking because I haven’t quite decided what is going on in these sculptures. They are certainly innovative if only in the same way the Denver Art Museum’s new building is innovative.

One museum attendant told me that during the installation he overheard Stella tell the curator (Michael Auping, Chief Curator of the Modern Art Museum of Fort Worth) that he wants to come back in two years to do another show – he’s 80 – of only new work.

A retrospective like this one – with 60 years of work –  is a worm hole through an artist’s career, and I feel the thrill of the voyage. When given a lifetime of work,  am I more generous to the artist?

I wonder if I will be as generous in two years.

The first photograph is from an educational site built by the Whitney Museum. Video and all others but the last one are by Steuart Bremner. Visit the Modern Art Museum of Ft. Worth for more info.