From beyond the lively hum of people inside the Museum of Contemporary Art, I heard a repetitive tick of a human voice. I worked, once, in a newsroom where the police scanner was constantly on, and it sounded like that.

I followed the voice to its source on the second floor and found a crowd standing around a woman swaying like a twig in the wind. This woman was reading a court report of a sex offense and murder case. Page after page fell from her hand as she read like a metronome a story that was creeping under everyone’s skin: the prosecution’s side, then the defense, and then a rest. She was out of words and we clapped. 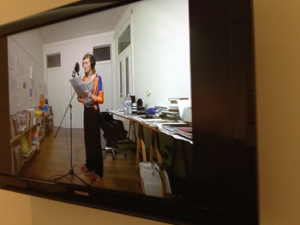 After the woman performed the court report, it was obvious that there were a lot of silent words nailed to the walls of this gallery, and many other less silent ones spilling out from somewhere else – a loud consistent bass line of a deep human voice pronouncing syllables in 1/1 time, and from somewhere in this room the recognizable melody of ‘Like a Virgin” with different words.

Later on, someone read poetry; I wasn’t in a mood to pay attention, although the visuals and audio of the performance should have made it more interesting to me. I was reading a video screen with multiple phases that begin with If you could…..

I was hopeful that the poet would connect with someone else who can make use of his ideas: art in the cultural soil, like phosphorus for fruiting plants, but they were vitamins and minerals that I wasn’t feeling the urge to absorb 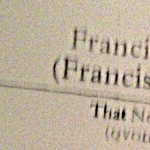 I wandered around the big obvious pieces in the largest gallery until I stood in front of what looked like the title page of a book in Latin, enlarged and framed, which turned out to be a drawing of this book page. A book, even one we know was produced mechanically, generates a feeling of intimacy by our custom of holding it and entering the thoughts of the writer. In this case its original would have had been hand-set type, but our perception of the hand-made book becomes more acute in this enlarged version because the letters were created with a pencil as it they were objects in a still life. The book rendered into a drawing was a translation from Spanish into Latin, and a thesis about the rationality of grammar, written by Francisco Sanchez, who was twice pestered by the Inquisition.

Another room was papered with words – all the words spoken by some New York artist over the course of three days. The words attracted viewers like running water – ala James Joyce – and was something people read for a few seconds and move on having absorbed the concept. Kenneth Goldsmith, the artist, made something very different from Ulysses, the words on this wall are what surfaced, the strings of words out of mouth, instead of what was said in head.

You could also sit in this room and read a book – set in a niche made for it in the bench – that contain four essays arranged not in chunks of pages but on four horizontal blocks on each page and color-coded. The brightest colors in each section were the words added by the proto-reader, the artist who made the book. A little less bright were words the artist had just altered, and the darker but clearly different words were ones the artist had moved. The section made sense and was modernized with added reference to the Internet for example. One essay I read was written in the nineteen-forties detailing theoretical proscriptions for art, capitalism and socialism. I sat and read; my friend stood and read the waterfall of words and waited for me. We explained to each other what I’ve just explained. I could go back and read more from the book, and I think I get more out of it.

For this same reason I leave already-read New Yorkers in my bathroom. I might never spend enough time in the MCA, without friends to bug me, to finish an essay, and it makes this idea ripe for digitizing. A great essay analyzed by several readers with equally vivid color-coding. Could a group of readers get more by reading the readers? Is this what blog comments were really designed for, or do I need to invent the overlay reader?

The sounds might have meant something in German or were just gibberish but were certainly meaningless to people as they passed through this narrow hallway of a gallery space moving so quickly, not stopping to become an audience as in the poetry reading, they were getting a hit of the Doppler effect. I stopped to read the words Glim Glib off the computer screen, as the Dylan Thomas voice read them, and the dialectic of intentional composition versus spontaneous writing argues their merits in my head. The ‘spontaneous’ pointing out the idea that if you had infinite monkeys typing they would eventually write Ulysses and the ‘intentional’ knowing how precisely intentional James Joyce was when he wrote it. There is art at the intersection of the monkey business of fighting entropy to assemble communication and the human race’s collective inner voice tumbling from low entropy to higher entropy – time’s arrow of increasing disorganization; an intersection of an idea and human consciousness, both of which are traveling at different speeds on time’s arrow.

Those things that are conceits: (concepts that may be more affected, fanciful, or unnatural)

A story is written in the corner of the room, and some of the words are less readable because they are printed or painted there so lightly. Other stand out. It the idea is that we do read like this and ignore some part of what we’ve read, wouldn’t a story from the New Yorker be a better example of this rather than a romance, mystery novel paragraph? 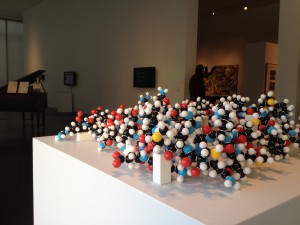 A poet writes a poem, translates it into Amino Acids (conceit: may we see the lexicon) which are given life as a protein molecule that then, after some amount of time, is translated from Amino Acids back to English words, and we read the final poem, which makes less sense than surrealist autowriting. Pretty molecule, however, made by Christian Bok.